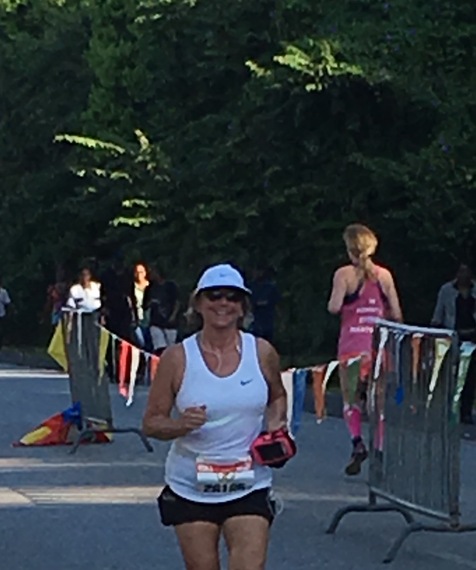 "You did not perish."

I had just returned from Negril, Jamaica, where I finished my first marathon, and Kevin McGuinness, my Washington, D.C., physical therapist, was putting everything back where it belonged.

You can gain a ton of knowledge and train with the most dedicated and gifted experts and specialists, but until you're out there, just you and the elements for 26.2 miles, you have no clue.

I am a marathon finisher.

This is what was in my head a few nights ago in the yoga studio before Chris Brown, an incredibly deep yoga teacher who must have been reading my mind, said something like finding the spot that is really difficult and staying there for five minutes is a great way to get yourself out of your head.

It was a yin class and every spot was really difficult so I had plenty of time to get out of my head. All of my energy and focus was on what I was feeling.

Which is, now that I'm back in my head and thinking about it, what happened in Negril. The subject came up with Kevin and anyone else who'd talk with me about the race because so much happened that I was trained to expect but didn't and want to understand.

At the quarter mark, my iPhone powered down because of the heat, and I stashed it in my pocket. My hydration and fueling plan was based on time and not distance, and I didn't think to wear a watch. Without my phone I miscalculated what I needed and ultimately became both dehydrated and swollen and probably hyponatremic.

"You had too much fluid and not enough electrolytes," my nutritionist, Sue James, told me when we debriefed on the phone after the race.

Later, when I was talking with my husband, a physician, he reminded me that I know this.

"Remember it all depends on what the kidneys think," he said. "The kidneys read both blood volume and sodium but if they have to choose one vs. the other, they'll prioritize volume preservation over maintaining normal electrolyte levels."

Go ahead and ask six friends if they know what an electrolyte is. Maybe one person will tell you something more than electrolytes are in SmartWater.

What I know is that electrolytes are electrically charged minerals (such as sodium and potassium) that are critical to cellular and tissue functions -- for example, nerve conduction and muscle contraction. When we perspire, we lose both water (part of our body's effort to regulate our internal temperature) and smaller amounts of electrolytes, mainly sodium and chloride.

And then there's the kidneys.

The kidneys are responsible for filtering toxins from the bloodstream and excreting them in the urine and for holding onto the good stuff, i.e., water and electrolytes, if they're needed. When the body is dehydrated, the fluid component of the blood is reduced. The kidneys register this and think, oh, the body's getting dehydrated so we need to retain water.

That's what my husband meant when he said that the kidneys will prioritize maintaining normal volume (hydration status) over electrolytes (normal amounts of sodium in the bloodstream).

So even though I was hydrating as I overheated, I wasn't replacing the salt I was losing because I was drinking water instead of Hi-Lyte, which, like Gatorade, contains electrolytes. As Sue was suggesting, my blood was getting diluted from both ends -- the kidneys, which were retaining water to combat dehydration, and my digestive tract, which was absorbing the water I ingested without electrolytes.

I feel like the teenage driver after her first fender bender. Everyone tells her not to tailgate but until she smashes into an SUV on the beltway it doesn't sink in.

And all that water ended up leaking into the tissues of my hands and feet.

A few days after the race, I was at my dermatologist's office having my annual skin check, which was a complete coincidence.

A marathon runner himself, Dr. Adam Friedman, who's on the faculty at George Washington School of Medicine, asked me about the experience. I told him that both my arms and legs swelled up like a balloon during the race.

"As you exercise the blood vessels can widen and become a little leaky," Dr. Friedman said. "Water can get into soft tissue areas that are most distant from the center of the body but that take the most attack -- the legs hitting the pavement and your arms, which you're swinging sometimes vigorously."

Dr. Friedman said part of the swelling can also be caused by the body's recruitment of inflammatory cells that's naturally set into motion when we workout and sustain microinjuries to our muscles.

I told Dr. Friedman that twice during the race I sprayed my arms and shoulders with a thick coat of sunscreen.

He smiled. At a certain point, the only thing you can do is smile.

The burning on my skin could have been from my sweat, he said.

Or a reaction to the propellant in the can of sunscreen.

Or from the swelling.

Or maybe the sunscreen blocked my sweat ducts, causing a heat rash that contributed to the burning sensation.

And blocked sweat ducts can contribute to overheating.

Maybe that's one reason why I had the feeling I was sprinting and working at my maximum aerobic capacity with my heart in my throat when in reality I was moving really, really slowly.

I've had this experience before and incorporate diaphragm exercises into my regimen to avoid over-breathing, which is apparently what I was doing while I was over-hydrating. If you keep pouring water into a glass that's already full, all you get is a whole lot of spillage.

It's the same thing with breathing.

If you take big gulps of air one right after the other through your mouth before you've made room for the oxygen by exhaling carbon dioxide, there's no place for the air to go, and you end up feeling winded and exhausted.

So here's what I'm thinking about as I'm back from Negril and deloading.

I was disciplined about my training in the gym and on the trail. Yet for me, on that hot, sunny day in Jamaica, my clutch workouts were my runs in the pouring rain, in the freezing cold, in the ice and snow.

This first marathon was about endurance.

It wasn't about thinking.

It was about feeling.

And yeah man I did not perish.