In the village of Bakong, Cambodia, there is a battle raging for girls' education. Like many places in the world, poverty, health, and traditional assumptions about the value of girls' education create barriers for girls and the successful completion of their education. The issues that they face are numerous and complex, yet aid organizations often respond with a singular program approach, implementing initiatives aimed at improving one aspect of education with the hope that it will be the answer to keeping girls in school. Girls need a holistic approach to education that recognizes the barriers that they face as interwoven and interdependent, and they need solutions that address their problems on numerous fronts. While the complexity of each girl's fight for education is unique, the story of one girl in Cambodia sheds light on the reality that success depends on circumstances far beyond the walls of the schoolhouse.

On a hot day in March, the Caring for Cambodia Gender Equity Program Manager and Bakong High School Female Advisor spend the morning visiting girls from Bakong High School who recently dropped out of school. Caring for Cambodia is a grassroots nongovernmental organization currently working with Bakong High School using a holistic approach to education, focused on both improving the current system and promoting sustainable programs easily disseminated to all government schools. The team hopes to understand the girls' situations and find ways to get them back to school. Each story that they hear highlights the barriers that girls face in obtaining an education in Cambodia, but one story stands out as a perfect storm of contextual factors threatening to obliterate twelve-years of hard-earned education. 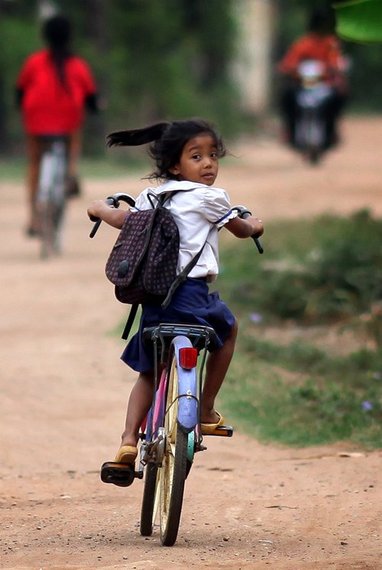 A schoolgirl on her way home in Kandal province. Photo: Sothy Eng

Kong's thatch-roofed home, no more than a large palate on stilts, consists only of a roof, four short walls and a plastic bag of tattered books which serve as decoration. Her beaming smile is made larger by a small, frail frame, which tells a tale of poor health and a family that subsists on fishing and rice. Kong's education is not a private affair, and her family gathers around the base of the house, her brother and sister-in law eager to interject their own experiences into the conversation. Kong's parents died when she was thirteen, and her academic success is intimately intertwined with her family's survival. The hope that comes with Kong's success is, in many ways, the difference between success and failure for the entire family. Even the small, barefoot children that listen intently at the base of the house seem to understand that this conversation could determine their own fates.

As a part of the Caring for Cambodia gender equity program initiative, staff members visit Kong in hopes of bringing her back to school and helping her secure a future beyond mere subsistence. As Kong speaks, her multifaceted story unfolds to reveal health issues, a failed program for girls' education, and a teacher who further undermines her already difficult situation. From seventh through eleventh grade a separate organization provided Kong with room and board near the school and paid for her private lessons, which are a ubiquitous problem in the Cambodian education system. When the program closed, Kong was forced to move back to her family's home and commute 10 km each way (about 6 miles) to school. For months Kong rode her bicycle to school, but in the middle of her senior year she fell ill and was hospitalized. She missed a month of school, but returned as soon as she was able.

A short time later, while she was fishing in a small pond for her family, an object lodged in her foot. Her leg became so swollen that she could not ride her bike to school. On the day of a required semester exam, Kong was determined to ride to school despite her swollen leg, in order to take the exam. But, her bicycle broke, she was unable to walk and her brother had taken his scooter to work. When asked why she didn't call or text someone to let them know she needed help, she nods to a battered old cell phone with rusted buttons, a missing front cover and exposed electronics. The family phone is broken.

As Kong continues to unveil the pain she has experienced and the ultimate failure of her attempts to stay in school, she begins to cry. She cries because she misses her friends at school, she cries because she knows the importance of education and understands that she could lose all that it has promised her. She cries because there is nothing that she can do to change her own fate. When her tears dry, she beams her broad smile again and states that if necessary, she will repeat the twelfth grade next year while working full time to help support her family. This seems like a stark punishment for one missed exam and the reasonable solution would be to retake the exam so that she can graduate. However, despite Kong's excellent grades, hard work and determination, even re-taking the exam is complicated and reveals problems deeply rooted in the Cambodian education system. 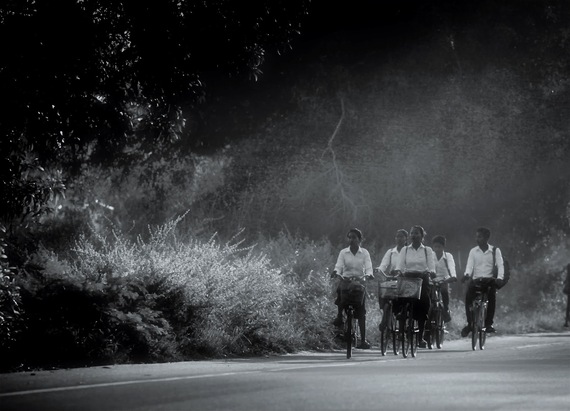 Kong explains that one teacher might stand in her way. In a system still struggling to recover from the Khmer Rouge genocide (1975-1979) that obliterated all educational infrastructure, including the educated population, progress toward an effective and quality system has been riddled with obstacles. Teachers trained during the tumultuous recovery from the Khmer Rouge face issues of inadequate training and insufficient professional development. Current teachers were students in schools that lacked both human and physical resources. The current generation of students are faced with school environments that fail to provide adequate teaching and learning opportunities. Teachers are under-paid, schools lack clean water, bathrooms, electricity, and classrooms capable of accommodating students. National exams are the deciding force between success and failure of all students. Kong's inability to return to school is a result of her inability to attend school during the exam. Unfortunately, in a system that is scrambling to form a semblance of consistency, exceptions for missed exams are not the norm. Rather, dropouts and failed attempts at a brighter future become more common.

For girls like Kong, who took advantage of every opportunity she could and overcame seemingly insurmountable obstacles, there is a way to provide them with the environment necessary for success. An environment that thrives on students' success and supports them through their failures. A place where students realize that there is hope for a better future. Girls' education is dependent on a holistic approach that creates a school community committed to preparing all students for a promising and bright future.

This holistic approach encompasses multiple dimensions, including programs to support students (e.g., gender equity, youth council, academic and career preparations, health, community outreach), teachers (e.g., teacher professional development), and schools (e.g., clean water, toilets, library, science/computer labs). This approach, as implemented by Caring for Cambodia, has been proven to be promising. Dropout rates between grades 7-9 among girls in schools supported by this NGO are 13% lower compared to schools at these levels nationwide (EMIS, 2013-14) and girls at one of these schools performed highest in science compared to 19 other schools in that province in a national exam (UNESCO Bangkok, 2015). Preventing girls from dropping out is not a simple task. It requires concerted efforts from different stakeholders with appropriate resources to win the battle for girls' education. When resources are unavailable or removed from the school, then girls like Kong pay the price. 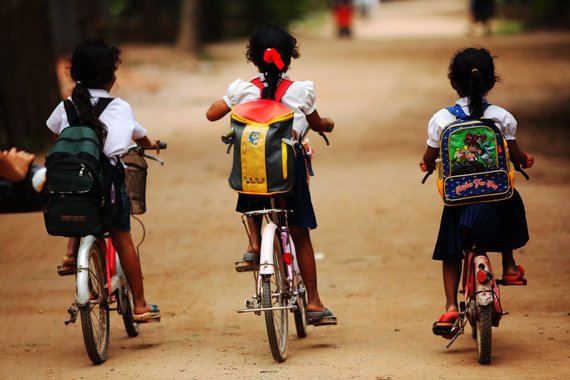 Schoolgirls on their way back home in Kandal province. Photo: Sothy Eng

At first glance, Kong might look as if she has everything she needs. She is a top student in her class who has been the beneficiary of NGO resources. She is clearly driven to continue her education to become a chemistry teacher at a local school. She is motivated by the lack of chemistry teachers in her community and feels a need to give back to the community that has molded and shaped her life. She values education and is determined to create a better life for herself and her family. Kong should be an easy success story. But her story, like so many girls' in Cambodia, is nuanced, complicated and determined by forces that are beyond sheer determination, will and opportunities.

Determination, will, and opportunity were Michelle Obama's primary message to a group of ten girls when she visited Bakong High School in March. She encouraged girls to take advantage of the educational opportunities offered at their school and get an education no matter what obstacles stood in their way. Had Kong not been busy fighting her personal battle for education outside of the school walls, she might have been in that group speaking to Michelle Obama. She might have been able to remind the First Lady that there are numerous contextual forces at play that can undermine motivation, dedication, and opportunities, and that those factors must be addressed. These contextual factors are where the battle lines are drawn for those fighting for girls' education.

Perhaps Kong's story is not exceptional compared to the hundreds of thousands of other girls in Cambodia, and elsewhere in a developing world. Her story could resonate with many of them. In Cambodia, girls' dropout rates continue to persist at steady rates. Between grades 7-9, the rates fall between 20-23% nationwide, according to the most recent Cambodian education statistics and indicators (EMIS, 2013-14). The solution lies in listening closely to the context and factors behind these numbers. The key to winning the battle for girls' education lies in an attack on all fronts; a holistic approach to girls' education by organizations that understand the contextual nuances that girls like Kong face, see the value in the battle, and promise to fight for their futures.

~~
Kelly Grace is a graduate student of Comparative and International Education at Lehigh University, Bethlehem, P.A. Her research interests include gender equity in international education development. She can be reached at krg314@lehigh.edu.

The authors thank Whitney Szmodis, a Ph.D. candidate in Teaching, Learning, and Technology program at Lehigh University, for her constructive comments on earlier version of this article.