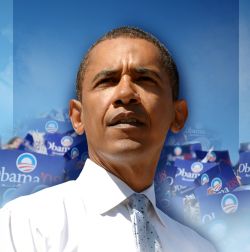 It's conventional wisdom that Clinton and Obama are fairly close on policy, so the choice between them will come down to "character" and theories of change. While I think that's broadly accurate, there are some differences in their voting records, and recently Elana Schorr took a close look at them to find where the candidates had made different decisions.

One of the few matters of real consequence (other than the war) was the 2005 energy bill, a legendary porkfest -- Clinton voted against it; Obama voted for it. I've had a few people write me and request details, asking, basically, "is this a big deal?"

The answer is, that's a bit of a gut call. Personally, I don't think so.

The headline of the press release makes it crystal clear why Obama (and fellow Ill. Sen. Dick Durbin) voted the way they did -- ethanol subsidies and "clean coal" research money (recall that as of Dec., the feds' $1.8b FutureGen boondoggle will sited in Ill.).

So, is this a strike against Obama? In some sense, yes, obviously it was the wrong vote on a horrible bill and he bears responsibility. But this kind of provincial vote -- for the financial interests of a legislator's home state, against the broader national interest -- is not exactly rare. Any Senator that runs for president is going to have some of these votes in their record. The question is, what do they propose to do as president, and what are the chances they'll actually do it?

On that campaign trail, Obama's been a mixed bag; there have been some green gaffes. Early last year, he pushed legislation boosting liquid coal. When greens threw a fit he backed off somewhat, making clear that liquid coal is kosher only if it meets low-carbon fuel standards, but it was a less-than full-throated renunciation. In November, he pandered to the mining industry in Nevada by coming out against a crucial reform bill in the House that would have updated the notorious Mining Law of 1872. He hasn't backtracked a bit on his support for ethanol, and even used it as a cudgel against Hillary in the Iowa primary.

That said, recent panders aside, he entered the race with solid green cred and a good overall green record. The climate/energy plan he released during the campaign is top-notch. I interviewed him briefly in 2006, before he was running for president, and he struck me as having a good grasp of the long game on energy. There are signs that he really gets the huge divide between what's possible on climate change and what's needed.

But of course, all these impressions are through a glass darkly. We cannot know what's in Obama's heart, or what he would do as president. On climate change, as on so many things, he's given us both hope and reason to pause.