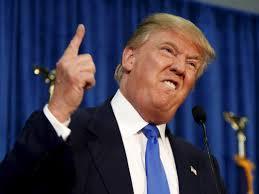 Donald Trump is wrong about most everything - not to mention being hate-filled and demagogic. But the few things he does get right may account for his popularity among Republican voters. While he offers very few solutions - and those he offers range from naïve to insane - he is not really offering leadership, but is serving as a mouthpiece, in blunt and bombastic terms, for the frustrations of many voters.

"The Middle Class Is Getting Screwed"

There shouldn't really be much argument about this, but strangely, most of the presidential candidates are unwilling to make such a blanket statement. They generally couch it in more delicate terms - "The economy is on the upswing, but some folks are being left behind," or "We need to do better at creating good-paying jobs."

Median earnings in the US have also dropped dramatically, especially for male workers. Accounting for inflation, the average wages of men between 30 and 50 dropped 27% over the past several decades. In the late 1960's, 95% of men between 25 and 54 were working, today only 80% are working, often at much lower wages.

You won't hear many presidential candidates admitting this, but Trump is correct that while individual politicians may not be personally corrupt, they are part of a political system that buys and sells favors for money. "I'm a businessman," says Trump, "and I give money to politicians as part of my business." This may sound like the reasoning of a multinational corporation during business in a third-world country, but the fact remains that Washington is the biggest bribery bazaar in the world.

Literally billions of dollars are spent to influence legislation, with the lobbyists often writing the bills themselves. And the way our political system works, elected officials spend most of their time asking for money from big donors, corporations, unions and special interests. If that isn't corruption, I don't know what is. And voters are not fooled for a moment by protestations to the contrary by politicians.

"Wall Street Is Getting Away With Murder"

"The hedge-fund guys are getting away with murder," Trump said. "They're making a tremendous amount of money. They have to pay tax. I want to lower the rates for the middle class...  They're getting absolutely destroyed." Trump is also right about this. We bailed out the executives on Wall Street who caused the biggest economic crisis since the 1929 Crash and nobody went to jail. In fact, the banks profited enormously. And they manage to game the tax code in their favor. What Trump has not proposed, but many voters would probably support, is breaking up the big banks that are "too big to fail" and returning the financial system to some form of sanity.

"America Is Getting Its Lunch Eaten"

While this claim by Trump is dubious, it is true that America has been slow to step up to global economic competition. However, Trump also argues that America needs to get tough on its enemies, and at the same time "stop being the policeman of the world." In that respect, his position isn't that much different from President Obama's - or even the other Republican candidates. Although all the Republicans seem to enjoy saber-rattling, few of them want to engage the United States beyond tough talk and perhaps a few air strikes.

In this respect, Trump, Obama and the Republican candidates are an accurate reflection of the American public's views. However, on a deeper level, lots of Americans seem frustrated that America can no longer impose its will on other nations. They have not faced the fact that in a global economic and political marketplace, no one country can dominate to the extent that the U.S. has done in the past. At the same time, there is clearly justifiable resentment that the United States is picking up the tab for most military operations for the rest of the world. Americans ask why we should be footing the bill on behalf of everyone else.

The good news is that the candidacy of Donald Trump has the support of, at most, 10% of American voters, and it is likely that he will fade out, or hopefully flame out, before long. However, Trump has changed the face of American politics by saying what lots of voters have been thinking, but few politicians have dared to admit. At the same time, he has injected the frightening specter of demagoguery and hate into the political conversation.

What responsible leaders must now do is adapt to the changing political landscape and admit to voters what they already know - that globalization and technology will continue to erode the standard of living of the middle class, that the political system is corrupt and needs serious reform, that the financial system requires a complete restructuring and that America must learn to adjust to a world where it can no longer have its way unfettered by other nations.

The alternative is for politicians to bury their heads in the sand, make promises they can never keep and continue on their corrupt and dysfunctional path. This is a recipe for social and political upheaval far worse than we have experienced so far. Trumpism - even without Trump - can quickly morph into xenophobia, political unrest and even violence. There no more room for rosy promises and empty slogans. The public has already lost faith in the political system. It's time for politicians to exercise real leadership by getting real with the American people, even if they are goaded into it by someone as despicable and unsavory as Donald Trump.