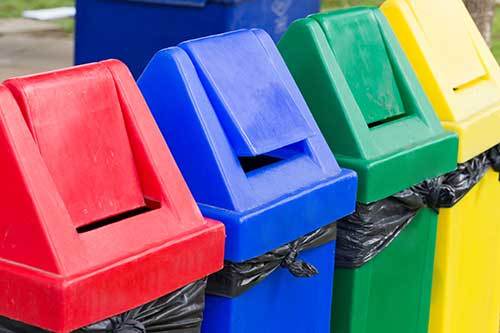 As anyone who reads this blog knows, I've been very excited about the potential of the evidence definitions in the recently passed Every Student Succeeds Act (ESSA). But I have also been anxious about whether they will really work. Will there be enough clarity and information on proven programs and practices provided to help educational leaders come to see evidence as helpful, rather than just another mandate from Washington?

Not long ago, I went to the American Educational Research Association (AERA) meetings in Washington. While there, I saw something that exactly illustrates how the ESSA standards could succeed or fail. It had nothing to do with educational research, however. It had to do with composting.

Here's what I saw. On the second floor of the Washington Convention Center is a food court with tables. When you buy food, you put it on trays apparently made of recycled cardboard, and then when you throw away your trash, you are faced with receptacles that offer three choices: "compost," "bottles/cans," or "general waste." I watched as person after person looked at the receptacles. No one had any problem with bottles/cans, but just about everyone looked back and forth several times between "compost" and "general waste," and finally gave up and put everything in "general waste." The trash piled up in that bin, while the "compost" bin was mostly empty.

However, there were a handful of receptacles that were different. They had the same three choices, but under "compost," there was a list. The list included the recycled tray, a big part of the potential compost. At these receptacles, peoples' behavior was clearly different. They quickly read the list, and put almost all of their trash other than bottles and cans in the "compost" bin, piling up that bin while "general waste" was nearly empty.

What the trash receptacles illustrated to me was the importance of specificity. Most of the people in the food court wanted to do the right thing, and to put as much as possible into compost, but they did not think they knew enough to decide what was appropriate for composting and what was not. They took the time to think about it, but all too often ended up regretfully using the "general waste" bin in frustration.

In the ESSA standards, educational leaders are asked to use programs that meet the highest standards of evidence. Programs with "strong" evidence are those with at least one randomized study showing significant positive effects. Those with "moderate" evidence are those with at least one quasi-experiment with significant positive effects, and "promising" means that a program has at least one correlational study with a significant positive effect. Yet there is no list of specific programs that meet (or do not meet) these standards. Joy Lesnick, the Acting Commissioner of the National Center for Education Evaluation and Regional Assistance (NCEE) within the Institute of Education Sciences (IES), recently wrote that IES has no intention of aligning the What Works Clearinghouse (WWC) or otherwise creating a list of proven programs according to the ESSA standards.

I have no doubt that principals, superintendents, and other educational leaders want to use programs with the strongest possible evidence of effectiveness, and the ESSA standards give them new reasons to want to find out what the evidence says. Yet without specificity about particular programs and practices meeting ESSA standards, educational leaders will be like the dedicated recyclers at the Washington Convention Center. They will not want to spend days in the library figuring out what works, and most will just go back to making decisions based on what publishers' sales reps tell them the evidence says. If this happens, nothing will change.

The ESSA standards are not self-activating. They will make a difference only if educators embrace them, and then select programs and practices that truly have the highest levels of evidence as indicated by independent, trusted, and capable intermediaries. Otherwise, these standards, like "scientifically based research" in No Child Left Behind, will be honored in the breach of observance, and children will be no better off. It will take quick and intensive action, likely outside of government, to identify and publicize guides to programs meeting ESSA standards, but the alternative is ESSA standards in the "general waste" bin.