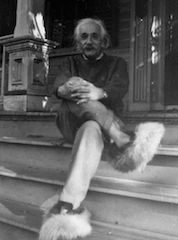 One of his most remembered poses, it does nothing if not conjure up our memory of the great man, known to have worn baggy old clothes and almost always appear disheveled. But this image doesn't do justice to something Einstein had on all of us: he planned, he was practical. He wrote a last will and testament.

Suprisingly, less than 30% of young Americans have a formal will and only 41% of baby boomers do. But Einstein foresaw what many of us don't.

In April of 1955, Einstein died from a burst blood vessel, which might have been prevented by the surgery he refused earlier in the year. Rather bizarrely, a pathologist removed his brain for study--causing him to be relieved of his position at Princeton, of course--before returning to the estate in 1998.

I knew I was onto something when I got a chance to peek the archives at Einstein's only american museum. After the museum's founding spurred by an onslaught of Einstein relics gathered for the filming of IQ. 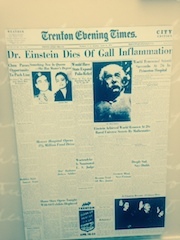 Landau's gracious owners, Robert and Henry, allowed me to search through their remaining archives in order to satisfy my curiosity about this fascinating history. I was working out of the small apartment above his store, reading every document that I could manage from the hundreds, thousands of papers and photos.

My heart pounded as I glimpsed the picture of Godel and Einstein that eventually became a book cover. I read every article, every scap, before I came to this:

LAST WILL AND TESTAMENT

A true genius--one of the greatest men in the last century--he was kind, strong and humble. He took great responsibility in advancing the fields of science and mathematics and, despite some family irregularities, this responsibility extended to the care of his legacy after death.

Einstein's will stipulated that all of his worldly belongings and intellectual property be placed in a trust guarded by his secretary and his stepdaughter. He left his violin to his grandson. After the passing of the trustees, the remaining rights of the trust were given to the Hebrew University in Jerusalem--interestingly, during his lifetime, Einstein had been asked to take over as the prime minister of the young state of Israel!

Einstein clearly thought about, carefully considered his own death.

Einstein's will turns out to be a pretty clear document and I think we can all learn a lot from reviewing it, and getting inspired to create our own wills. A will, in effect, is a formal document (usually written) that lays out what happens to your financial assets and debts when you die. While many people may think of a will as something more--it is first and foremost a financial document.

If you still need convincing, here are my top five reasons why you should write a will.

1. If you pass away without one, you have absolutely no control over what happens to your assets. Your family, your loved ones--in particular, a partner you may live with--May have no access to your estate without a will.

Intestate is the term used to describe the estate of someone deceased with no will. This doesn't mean that the state will flat out inherit all your assets, but instead will distribute it according to the formula in law. As with all inheritance laws, wills are heavily governed by state law so it is important to consult local jurisdiction to determine the formula, requirements and tax liabilities.

2. By the same token as number 1, you also have no control over what happens to your debts--or who becomes responsible for bearing your financial burdens. Can you imagine the burden heavy debts might place on members of your family?

While most inheritors do not "inherit" many types of debt (credit card, mortgage, etc.), some collection agencies may come after your family and partner. Thus, its better to make sure that all of your debts are under your name, and that you have made your inheritors aware of them, ahead of time. Without those protections, many debts will absorb your assets before your estate can access them. 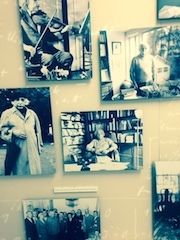 3. If you have children, writing a simple will can help ensure their safety and happiness after you are gone.

This is often one of the first things people associate with writing a will, but how much do we really know about the process? What is there to consider?

Well, for starters, you must think about who you know that could be responsible for your dependents' well being, and who would be willing to take that role. In addition, consider taking out a life insurance policy or entrusting your assets to them so that your children are provided for.

4. Business owners can and must have a will in place, as well as a Power of Attorney, in order to ensure the smooth running of their businesses in the time of illness or death. Without these measures, important day-to-day decisions can stand still, losing clients and money. For instance, if an entrepreneur falls ill into a coma, without a Power of Attorney, her business partner or trusted confidants may not be able to do so much as sign the paychecks compensating employees. 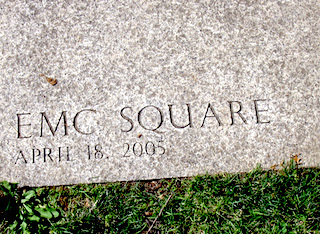 A square dedicated to Einstein in downtown Princeton.

5. Once you have a will written and you've consulted the experts, you can decide what portion of your assets will go to the state.

As I stated earlier, wills and inheritance in the United States are under the arm of state laws and thus vary depending on where you live and where your inheritors live. The federal government imposes taxes on inherited property and gifts, according to specific guidelines. States typically impose taxes on the whole estate's worth, and many times only those very large estates. Meanwhile, only .3% of estates owe federal tax.

Whether you are looking to ensure your children's safety and future, or dictate how much of your earnings go back into the tax system, writing a will is an essential action and we can all benefit from taking advice from a genius like Einstein here.