Daily, we see celebrities representing the face of various products and causes. From makeup to lotion to political fundraisers to controlling the pet population, the endorsements abound.

While our beloved celebrities may win awards for their on-screen personas, the public is usually pretty conscientious of who actually has a heart invested in their said foundations and organizations and who has a publicist shoving an agenda down their throat.

When passion is ignited, people don't see that... they feel it.

And Emma Watson is not just ignited; she is burning with that passion and passing the torch right along -- all the way from the podium of the United Nations.

Emma took to the mic to highlight the importance and urgency of the gender equality movement known as the HeForShe Campaign.

The speech focused on societal misconceptions of the feminist movement and instead of focusing on the word "feminist," she put the spotlight on the mission and ambition behind the word.

An interesting focus of her speech was encouraging society to think of the many ways gender inequality is also a problem for the males of the world.

Her words shook the gender scales and have sparked discussions from both women and men on how gender discrimination is an issue affecting men just as much as it is a concern for women.

Here are five reasons the feminist movement pertains to males as well:

1. Disapproval of the domestic male. Males are not taken as seriously if they decide to have a significant domestic role (also known as "Mr. Mom" reproach). Emma was quick to acknowledge her father as a key nurturing figure in her life, and how society viewed this characteristic in a condemning light. If women are expected to be the primary nurturer by default, this automatically eliminates males who wish to step into the role as more of a principle figure.

2. Rising male mental illness. Emma noted that in the UK, suicide is the leading killer of men age 20-49. This statistic surpasses deaths caused by accidents, cancer and coronary heart disease. A significant reason suicide has such a precedence is because men feel unable to ask for help as it will give the appearance they are somehow less of a "man." If females are solely categorized as the "sensitive communicators" this leaves little room for a male to feel empowered to voice his needs, and process vital feelings.

3. Closeted sexuality and gender identity issues. A New York Times study shows millions of gay men still remain in the closet. Gay men are half as likely as straight men to acknowledge their sexuality on social networks. A tenth of gay men say that they do not even tell their inner circle about their sexuality. Gay porn searches are, for the most part, equally prevalent in all states, including conservative ones. This suggests that there are just as many gay men in less tolerant states as there are in accepting states -- they're just suffering in secret. Statisticians of this study also noted a common assumption from wives is that their husbands may be gay, saying, "In the United States, of all Google searches that begin 'Is my husband...,' the most common word to follow is 'gay.'" Alarmingly, 21 of the 25 states where this question is most frequently probed, support for gay rights is lower than the national average. In other words, many men are directly affected by how society presents and personifies the male gender.

4. Male aggression repercussions. Whether the aggression is within the confines of a corporate boardroom or bedroom walls, males have been conditioned to seek a dominating stance within their relationships (be it co-workers or significant others) and often encouraged to underplay the significance of their aggressive behavior. To allow a woman to rise to an equal or upper hand is often referred to as "being whipped" or other condescending terms.

What this conditioning also advocates is submission. If the male is to render respect as the "top dog" that therefore means the woman must submit to these terms. This superiority rationale leads to repercussions far beyond basic equality.

Statistics show that men make up the majority of gun owners, gang members, sexual assailants, domestic abusers, and stalkers. According to the Federal Bureau of Prisons, males make up 93.3% of prison inmates. Males also comprise of the majority of corporate fraud.

When men are conditioned to seek and expect control of outside forces, they often lose control of their inner forces, including their actions.

5. Intense success standards. Just as women may fall victim to extraordinary body image standards, men are facing stark insecurities caused by a distorted sense of what it means to be society's definition of a successful man. The stakes keep advancing, leaving men to feel as if they will never reach this unrealistic expectation of a "norm" placed upon them. If society encouraged both men and women to reach for the same stars, the weight of the world wouldn't fall so hard on the male shoulder.

So, clearly "feminism" is not an isolated female issue... it is a human race issue.

You might be thinking, 'Who is this Harry Potter girl and what is she doing speaking at the UN?' and that's a really good question and I've been asking myself the same thing. All I know is that I care about this problem and I want to make it better. And having seen what I've seen, and given the chance, I feel it is my responsibility to say something.

Edmund Burke said all that is needed for the forces of evil to triumph is for good men and women to do nothing.

In my nervousness in preparing for this speech, I told myself firmly, 'If not me, then who? If not now, when?'

It is our hope that you will continue to ask yourself the same questions when you are faced with challenges in your own life. Participate in solution-driven conversations, and invite MEN into those conversations. Free yourself and others of gender stereotypes. When men are empowered to embrace their authentic selves, women will reap those benefits as a direct result. Give yourselves permission to be strong, vulnerable, intelligent and expansive. But most importantly, as Emma so eloquently put it, "It is time that we all perceive gender on a spectrum -- not as two opposing sets of ideals." 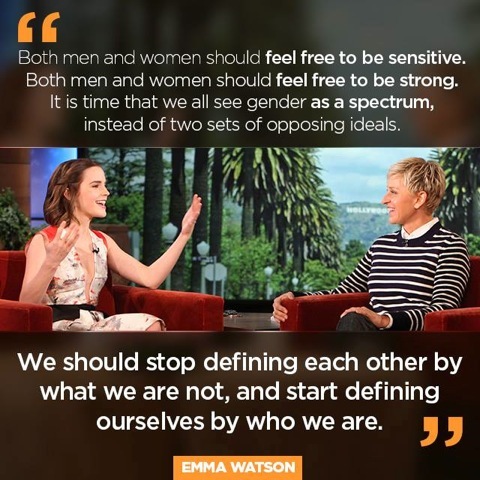 Author and blogger dedicated to helping caregivers of wounded veterans