Icelanders have never been big protesters. 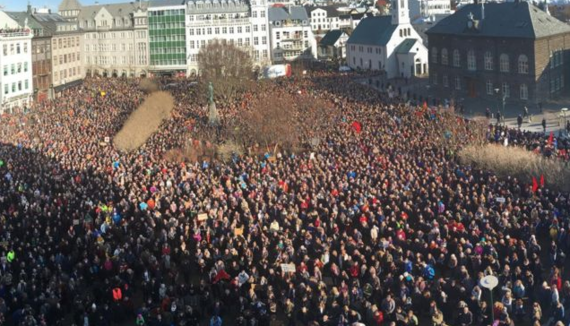 Inflation has often skyrocketed this little nation leading to price spikes and job losses but people haven't protested, complained yes, but not protested.

That changed in October 2008 when three Icelandic banks collapsed literally overnight and people realized that the government hadn't done what it was supposed to do to deal with the financial crisis. People went to the streets and protested against the government who didn't seem to have a clue what to do at that point. The protests intensified over months and reached a peak in January 2009 with thousands of people showing up to protest at the parliament demanding the government to resign. The protests continued on for a while and now are referred to as the Kitchenware revolution because people showed up with pots and pans to make as much noise as possible. Finally the protests had the intended results, the government resigned, and a new left-wing government was elected in April 2009.

In 2013, after the regular four-year period, the people of Iceland elected a right-wing government back into office. It was the same parties with some of the same people who hadn't been able to deal with the financial crisis before. Many of us were shocked but initially we made fun of our fellow Icelanders who obviously had a goldfish memory for electing the perpetrators back into office.

From the moment the Panama Papers scandal erupted around the world with our prime-minister Sigmundur Gunnlaugsson in the foreground, it all felt like a deja-vu. Again we realized we had a government in place that was more focused on filling their own cups than caring for the people who they were working for. 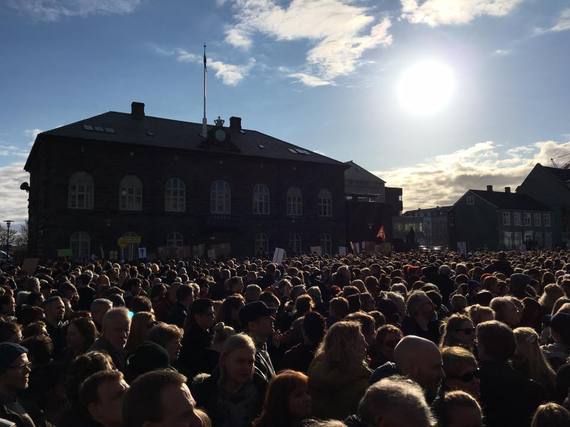 I was there. I took Action!

On April 4th 2016 we went out again, we protested, and demanded that the premier minister would resign. The premier minister announced he wouldn't resign, then resigned after a lot of pressure from his own party, then changed his mind again, argued that there was nothing illegal about his wife having a company in a tax haven, and that he always paid his taxes. We did not give up and he finally gave in and resigned for good. He still wanted to keep his parliament seat but gradually he has been pushed out by his own party and is now on indefinite "holiday."

Let's review what we now know:

• Wintris was used to invest millions of dollars of inherited money that was moved out of Iceland in 2007 when the Icelandic Krona was strong and foreign currency cheap. Today the same amount is worth double because of the drop of value of the Icelandic Krona.

• Gunnlaugsson did not disclose that he co-owned this shell company, as required by parliamentary rules, when entering the Parliament in April 2009. His argument was that the rules asked to disclose only companies with "commercial activity," not an asset holding company like Wintris

• On the last day of 2009, he sold his half of the company to his wife for $1 just before a law that required Icelandic officials to reveal any conflict of interest became official on January 1st, 2010

• Among Wintris' holdings were bonds of the three major Icelandic banks that collapsed in 2008 which made Wintris a claimholder in the bankrupt banks. At the same time the premier minister was negotiating with the winding down boards of the bankrupt banks and claim holders on how to deal with their claims to prevent a sudden currency outflow.

Lawyers can call them what they want, but the Icelandic people calls these revealed facts illegal. A regular citizen hiding their money in a tax haven in order to cut down on taxes is frowned upon, but a politician doing the same thing is highly unethical and can not be legal.

That is why it isn't enough that the prime minister has resigned, because there are still at least two cabinet members with offshore financial history currently in office. Icelanders are still protesting daily and will continue to do so until the whole government resigns.

What can entrepreneurs learn from the Panama Papers, based on the insights from Iceland:

1. Keep your ducks in a row. Do not titter on the edge of law - your ethics become highly questionable, if not illegal. People and clients will question everything you're doing and most likely steer clear from you.
2. Be transparent. That's how you build and maintain trust. Also, mistakes happen, you are human. As long as you come clean about them right away with a clear and authentic intention to own what went wrong and how you are going to fix it.
3. Surround yourself with people with high standards. Stay clear of people who are into shady deals and get-rich-quick schemes. You know that "overnight success" actually takes years in the making.
4. Take action. Don't sit around and wait for others to protest on your behalf. Do something against the injustice in the world, whatever that is according to your values. You can change the world, your voice matters.
5. Be first. Be the first one to admit a mistake, be the first one to voice a concern, be the first to take matters into your hand. A true leader takes risks and is the first to lead a change.

Be Inspired. Think Big. Take Action! Learn how by joining my amazing group of people: Passion to Profits Entrepreneurs