"Do not come to Europe," warned European Council president Donald Tusk in early March to all those migrating to Europe to seek economic opportunity rather than simply to escape direct persecution. Europe's refugee crisis has been bumped to the top of the list of crises engulfing European politics and is showing no material signs of abating. The crisis has borne an uprising of far-right, anti-immigration political ideology across Europe -- most notably in the rise of Marine Le Pen in France and the successes of the Alternative for Germany Party in recent regional elections in Germany. This resurgence in far-right ideology is partly due to security concerns, but, as in the U.S., is also a response to Europe's legacy economic woes. This far-right momentum, if continued, will prove to be a perverse response to the crises facing Europe, only exacerbating economic pain.

While Tusk and others' plan to detain and deport economic migrants to Turkey has come under international fire on moral grounds (Turkey is relatively safe when compared to Syria, not so much when compared to Europe), European policymakers should also reconsider their plan for economic reasons. While the global number of people over the age of 65 only represents 8% of the world's population, in Europe, that proportion is doubled. By 2050, the United Nations (UN) expects 65-and-older citizens will make up 26% of Europe's population. This represents a massive contingent liability for Europe's social security systems, especially given that they are principally funded out of current tax revenues. European governments are already struggling to bear harsh austerity measures imposed by the European Commission and other creditors to reduce their massive public debt load, which is hovering at around 90% of Europe's GDP. An open door policy would be economic win for Europe's policymakers, for whom pension cuts and further economic hardship would only imply political downfall.

First, the flow of refugees is improving Europe's demographic profile (with respect to the sustainability of social security programs). The average migrant is under 18 years old (Figure 1). Reducing Europe's average age will increase the amount of tax revenue for a given number of retired people, thus reducing the budget/debt burden. Secondly, and related, Europe will benefit from increased economic activity. Investment, like other economic activity in Europe, has yet to recover from the financial crisis. It is recovering even more slowly than other areas of the European economy and remains at a historic low as percentage of economic activity (Figure 2). 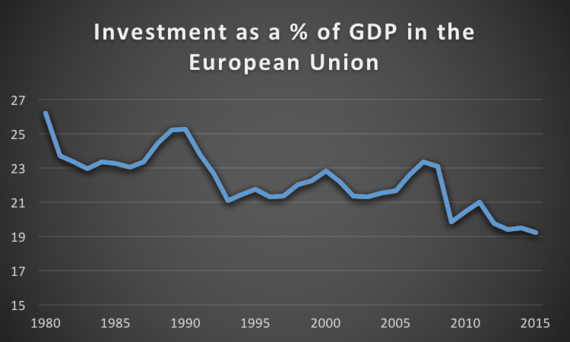 Figure 2: Investment as a percentage of gross domestic product in the EU. Source: IMF An aging population is a large contributor to this phenomenon. Firms will not invest in major projects if they perceive future demand for the output from such a project to be lacking. A younger population would drastically change that investment calculus for firms. Such activity would also boost the effectiveness of the European Central Bank's (ECB) economic stimulus measures. A boost in investment will create demand for bank loans, and thus push some of the ECB's stimulus into the real economy. Thus far, banks have largely left stimulus received from the central bank parked in deposit accounts at the central bank (Figure 3). Opening borders to flows of refugees will help push these reserves into financing productive assets and might help Europe escape the monetary policy trap of the zero lower bound on interest rates.

Figure 3: Balance sheet changes for euro-area banks since June 2014. Source: Bloomberg The UN and other international agencies have spoken out against what they see as a lack of humanity in the European Commission's proposal to detain and deport economic refugees. But European policymakers don't need humanity to see that they should be opening their doors to migrants, not building fences.