Eva Longoria says some of her earliest childhood memories are of accompanying her family to volunteer at the Special Olympics in her hometown of Corpus Christi, Texas.

"Volunteering was very big in our household," the 39-year-old actress and youngest of four daughters remembers. "My eldest sister is mentally disabled, and we benefited from all of these community programs that helped her -- whether it was an after-school program, Special Olympics, the Boys and Girls Clubs, arts or dance. We were always going with my sister. It taught us compassion and what it meant to put yourself in other people's shoes."

A desire to give back prompted the TV star to form Eva's Heroes for developmentally disabled kids in 2006 and the Eva Longoria Foundation in honor of her own Mexican-American heritage; the latter organization empowers young Latinas through education and entrepreneurship and was founded in 2012. That same year, Longoria took a break from her television career to focus on travel and philanthropy after her hit show "Desperate Housewives" wrapped, and when New York Times journalists Nicholas Kristof and Sheryl WuDunn invited her to go to Cartagena, Colombia to film a documentary companion to their latest book, A Path Appears, she was ready.

"I've seen poverty throughout the world, yet I was surprised at how bad it was in the slums of Cartagena," she says of the neighborhoods where she visited the work of the Juan Felipe Gomez Escobar Foundation (Juanfe), which helps pregnant teens in the region. "I normally think of Cartagena as a tourist town, but once you go outside the walls, the poverty is unbearable. You couldn't walk three feet without seeing a pregnant teenager. Teen pregnancy is an epidemic there."

In the second episode of the A Path Appears documentary series, which also focuses on issues such as human trafficking, gender-based violence and child slavery, Longoria's onscreen moments with a thirteen-year-old mother and the girl's newborn child are startling. She says the most shocking thing about the experience was witnessing the pervasive and widespread acceptance of early teen pregnancy.

"I visited a house with dirt floor and five generations of women -- a great grandma, a grandma, a mom, her daughter and now that daughter has a baby. "I asked them, 'Do you not see this pattern?' It was an attitude of 'We have no choice. What else are we going to do?'"

Between generational poverty and a lack of societal pressure to end the cycle of extremely young and unwed mothers, teen pregnancy remains deeply entrenched in the barrios of Cartagena. Yet, Longoria says Catalina Escobar, who founded Juanfe, believes her organization's training programs are making a difference.

"Juanfe provides daycare for the children while the young mothers are in school," Longoria says. "At school, the girls learn a trade or a skill and then there's job placement at the end of the school year. There's also therapy, counseling and a relocation program to get them out of the slum. [Catalina] is saving one life at a time and trying to increase the awareness of the girls' self worth."

Longoria says her travels to Cartagena reminded her of the most important lesson she learned as a child: Making a difference doesn't require fame, money or trips to other countries. "There are so many things that need improving within your own community. Right outside your front porch you will find somebody in need. You don't need to be rich or famous to be a philanthropist or volunteer. Anybody can do it and everybody should." 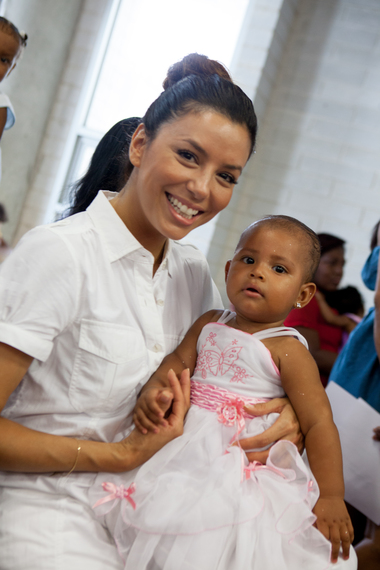 To learn more about Longoria's journey and the work of Juanfe, watch Episode 2 of A Path Appears on PBS February 2 at 10 PM. Check your local listings for exact air times and stations.