Sometimes there's nothing better than an ice-cold beer on a warm afternoon (or evening, or night...). But with so many styles of beer out there, it can be tough to choose which one to enjoy. Understanding beer fundamentals, along with the two basic types (ales and lagers), will help you navigate any drink list or intimidating row of taps. (Picking up some fun facts to impress your drinking buddies never really hurts, either.) 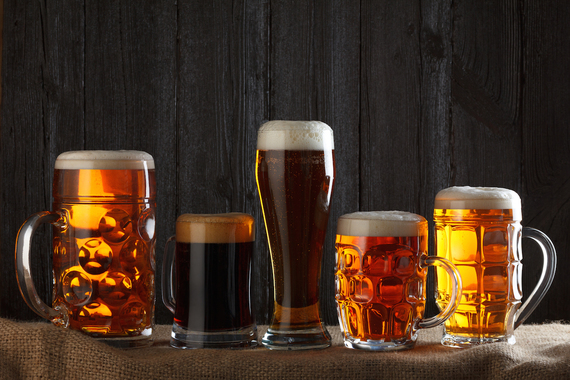 From beer gardens to gastropubs to your neighborhood bar, "craft beers" have been popping up on chalkboard menus from coast to coast. So what exactly are they, and what makes them different from "regular" beer? For starters, craft beers are made by craft brewers, which are small, independent and traditional entities, according to the Brewers Association. "Small" refers to an annual production of six million barrels of beer or less. "Independent" means less than 25 percent (or equivalent economic interest) of the craft brewery is owned or controlled by an alcoholic beverage industry member that is not itself a craft brewer. "Traditional" means that most of the beer's flavor is derived from traditional or innovative brewing ingredients and their fermentation. Over the past few years, craft beers have become associated with a rustic, wholesome image and the local, farm-to-table-driven products many American consumers have learned to love (and love to support). 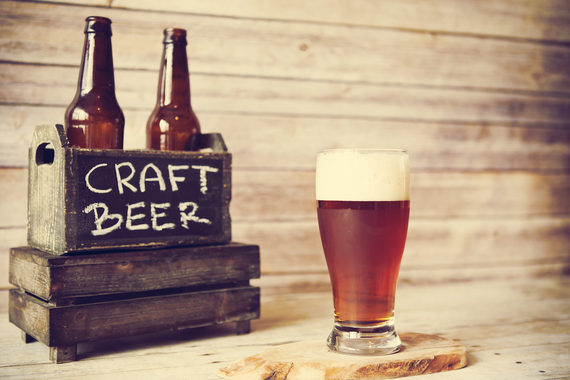 To date, there are over 4,000 craft breweries in the U.S -- more than double the number in 2011. The reason for the trend? Consumers today care more concerned about where their food and drinks come from. Craft brewers, known for their unique beers and styles, tend to be more environmentally conscious, be involved in their communities, and maintain a general sense of independence from corporate interests. 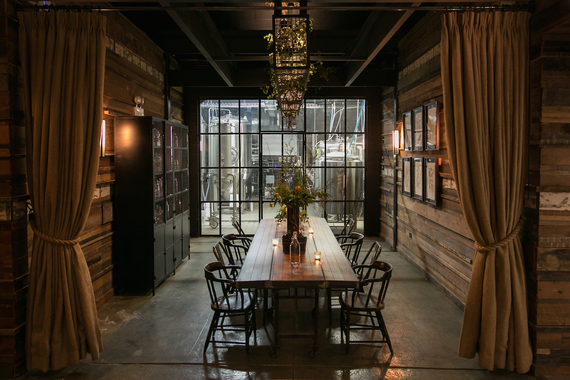 "Microbreweries," a subset of the craft beer industry, produce less than 15,000 barrels of beer per year, with 75 percent or more of their beers sold off-site.

Ale and lager are two types of beers that are both fermented from grain. Ales are generally fruitier, sweeter, more full-bodied and more complex than lagers, which tend to be smoother, lighter and generally easier to drink. But the major difference between these two beer types? The temperature at which they are fermented (and subsequently, the type of yeast used). Chemical reactions happen more slowly at lower temperatures, which affects characteristics like flavor, carbonation and alcohol content in major ways.

A brief history...
Considered one of the oldest beverages produced by humans, ales were an important source of nutrients in the medieval world. Their highly nutritious makeup contained just enough alcohol to act as a preservative and provide hydration without intoxicating effects. Throughout the Middle Ages, ale -- whose brewing was done primarily by women -- was consumed daily by almost everyone, including children, as it was safer to drink than most water due to the hours of boiling required in production.

Brewing process
Ales are brewed under warm fermentation (around 75 degrees Fahrenheit is ideal) using top-fermenting yeast, which rises to the top during fermentation. This creates a very rich, thick beer head (the airy foam on top of beer, produced by gas bubbles rising to the surface). 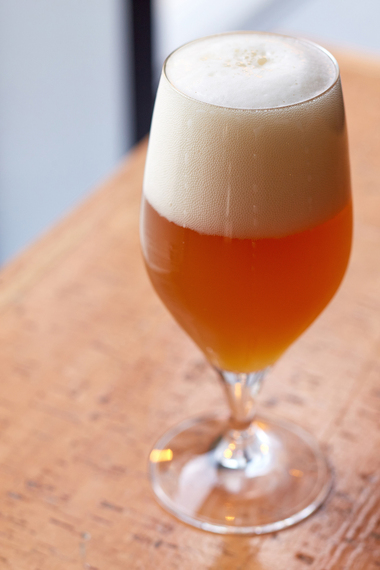 Chicago's Bin 36 is well-known for its wines, but lots of great beers are also on offer, including several frothy, thirst-quenching ales, which pair well with small plates like pimento cheese fritters and crispy brussels sprouts. 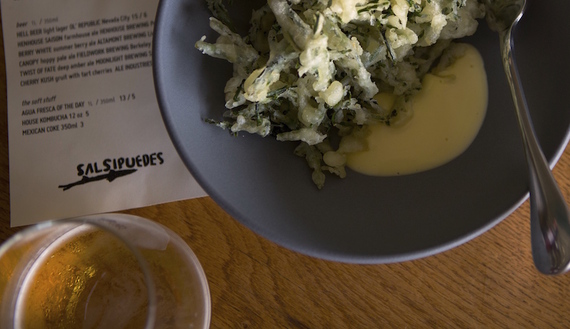 At Salsipuedes in Oakland, the variety of ales on offer are a great partner to the bold cuisine, including tempura nopales (fried cactus) with Kewpie mayo. 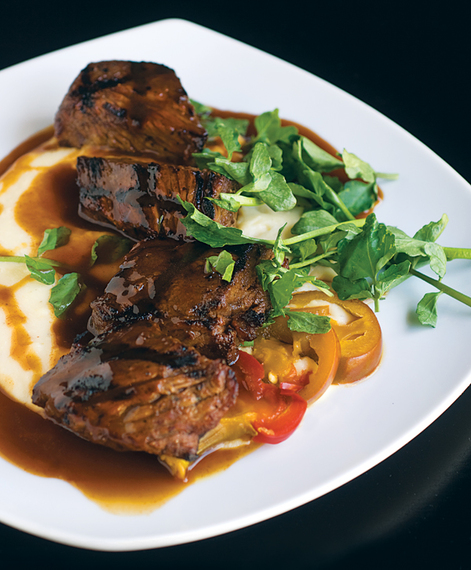 One of the best spots to grab a pint in Boston, The Tip Tap Room dishes out a rotating selection of unexpected game meats -- recent highlights include kangaroo and yak -- to pair with its 36 drafts and 31 bottles of beer, including several pale ales. 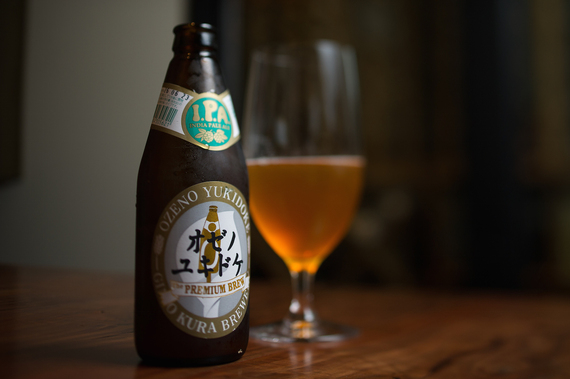 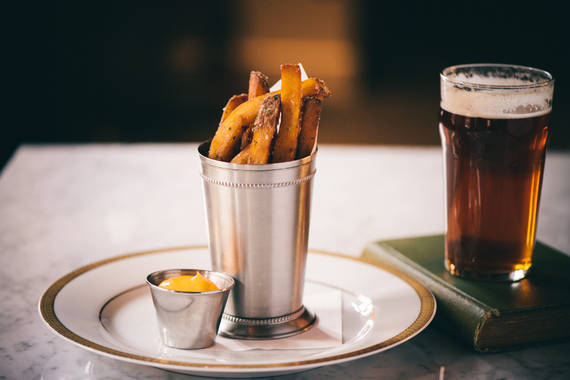 Another ideal pairing with a crisp IPA, The Olde Bar in Philadelphia dishes out amazing Beef Fat Fries with Old Bay mayo. 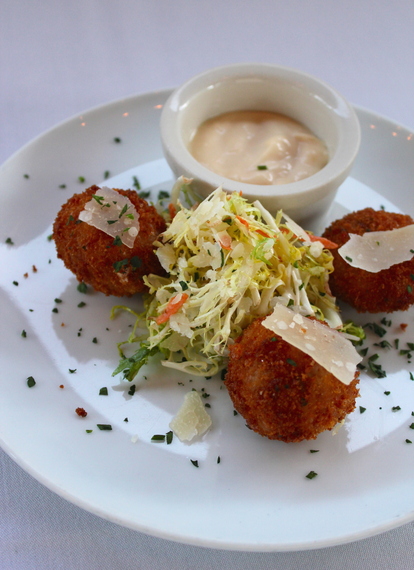 In Los Angeles, Magnolia has lots of fantastic bites, including lightly fried Risotto Balls with Parmesan and garlic aioli, sure to bring out the best in any IPA. 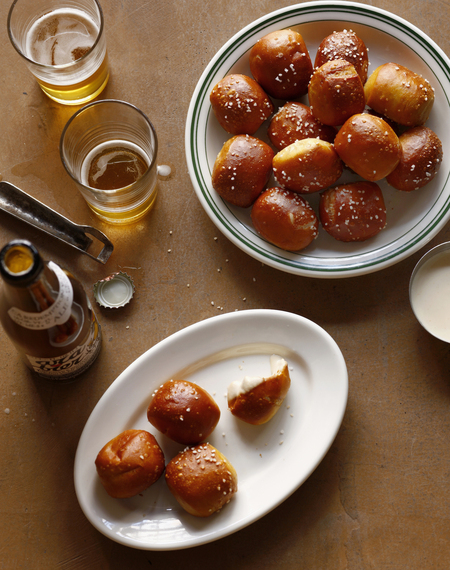 The house-made pretzels with spicy beer cheese from Alla Spina in Philadelphia are delectable with any of their large format (25oz) beers, including a number of awesome ales. 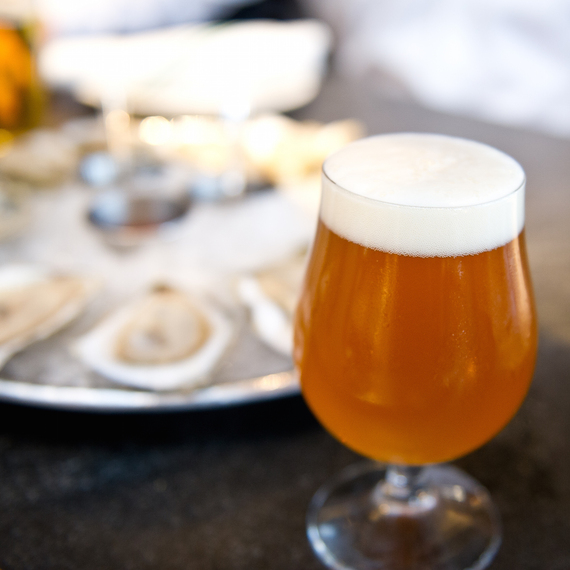 At Boston's Row 34, the freshest seafood -- raw oysters and whole fish are mainstays -- is available to pair with over 60 beers, including several different types of ale.

Wheat beer
Wheat beers are light and easy to drink refreshers, with a tangy, spritzy effervescence and hints of spice that makes them a hot weather favorite. They go with everything from fresh salads and steamed mussels to savory egg dishes and Mexican food. 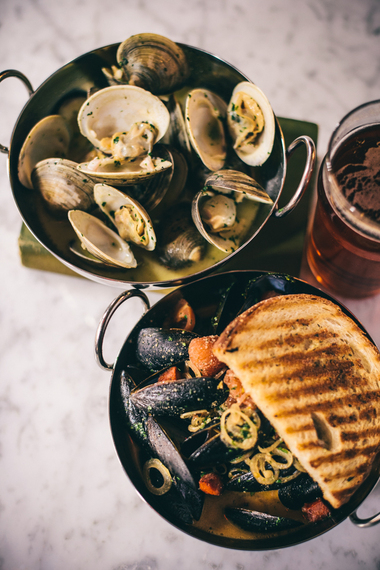 The Olde Bar in Philadelphia dishes out mussels in savory broth, made extra delicious next to a crisp and refreshing wheat beer. 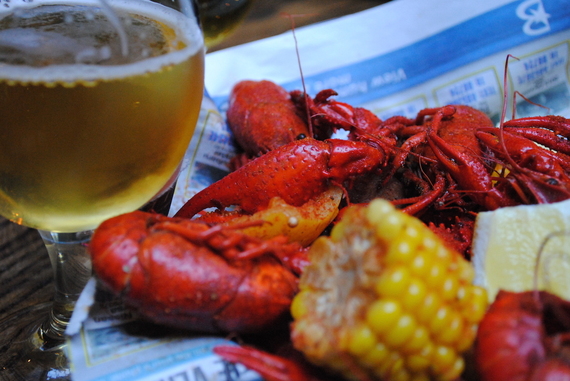 A zippy wheat beer is fantastic next to a big serving of fresh seafood from Kinmont Restaurant in Chicago, where items like wild Gulf shrimp cocktail, Maine lobster, Alaskan king crab legs and raw oysters are mainstays.

Brown Ale
Brown ales are mellow yet flavorful, often with subtle citrus, caramel, toffee and toasty notes. They're ideal with nutty cheeses like Gouda or Comte, as well as grilled red meats and earthy root vegetables. 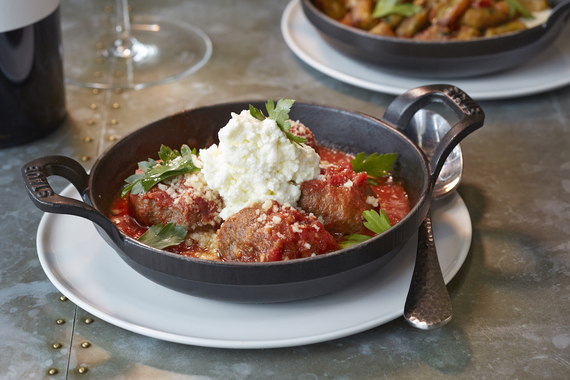 Photo provided by The Backroom at Moody's.

In Boston, The Backroom at Moody's serves up Never the Same Wagyu Meatballs, a mix of their best cuts of meat, fresh herbs and lots of cheese -- great with any of their refreshing ales.

Stout
Stouts, like Guinness, are typically the darkest, richest, most coffee-like brews. Their creamy character and fuller body comes from roasted barley and is fantastic with chocolate, grilled meats, shellfish and fruity desserts. 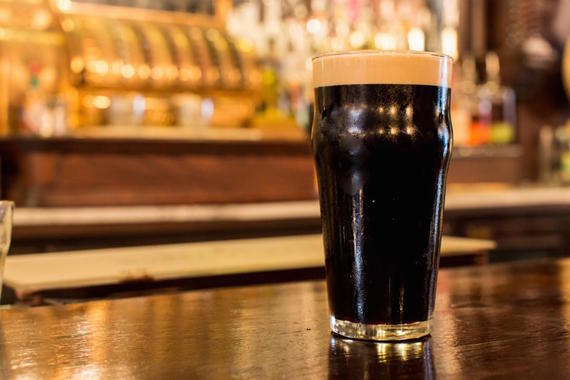 Photo provided by The Bar Room.

At The Bar Room in NYC, over twenty drafts and bottles -- including a dark and dreamy stout -- are available to pair with the New American small plates and bistro-style entrees.

Porter
Like stouts, porters are very dark in color and have light, sweet notes. They are usually milder than stouts and may include coffee, toffee or chocolate aromas, which make them ideal sipping beers. Porters are awesome with smoked foods, barbecue, rich stews and chilis, bacon and charcuterie. 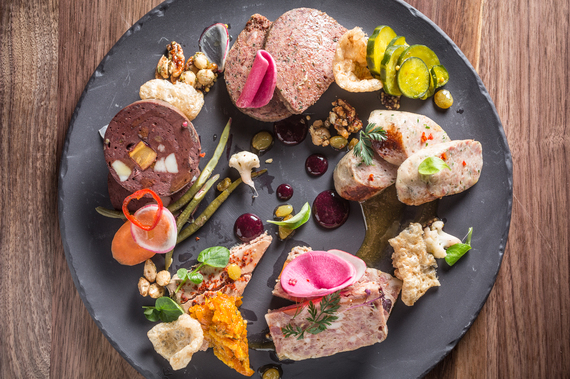 The House Terrine Board at Townsman in Boston, with its rotating selection of meats, pickles, mustards and other condiments, is an incredible plate of goodies to enjoy with a porter.

A brief history...
The story goes that in the Middle Ages, Bavarian brewers discovered that their beer (ale) continued to ferment while being stored in cold ice-caves during the winter, resulting in a greatly improved, mellower tasting brew. Called "lager" (meaning "storeroom" or "warehouse" in German) because of it's long storage period, this beer would be brewed in late fall, covered with ice harvested from nearby lakes and rivers, and stored until spring. The lager, which fermented at around 40 degrees Fahrenheit, took nearly twice as long to finish as ale brewed at 58 degrees Fahrenheit. Refreshing and crisp with a smooth finish due to their longer aging, lagers top the list of the world's most popular beers.

Brewing process
Lager is a type of beer that uses a process of cool fermentation, followed by maturation in cold storage, and uses bottom-fermenting lager yeast, which grows less rapidly than ale yeast and settles to the bottom during fermentation.

Pale lagers
Pale lagers are the most common beers in worldwide production. They tend to be dry, clean-tasting and crisp with a slightly hoppy bitterness. A perfect beverage for a beautiful brat or savory barbecue. 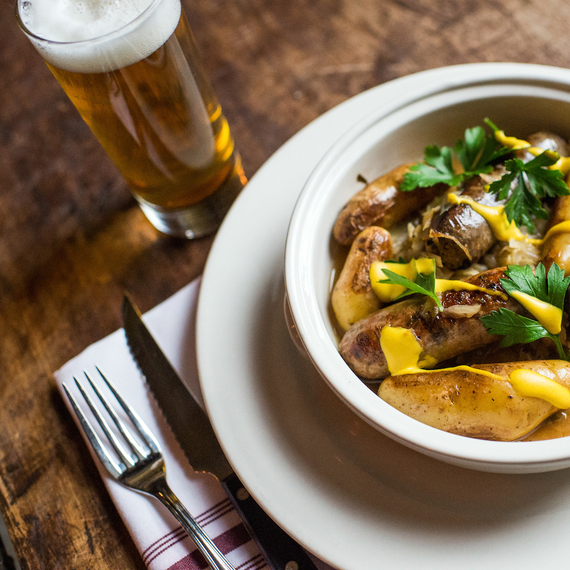 At Freemans in NYC, the spicy pork sausage, with smashed fingerling potatoes and smoky poblano cream, is extra delicious alongside a cold pale lager. 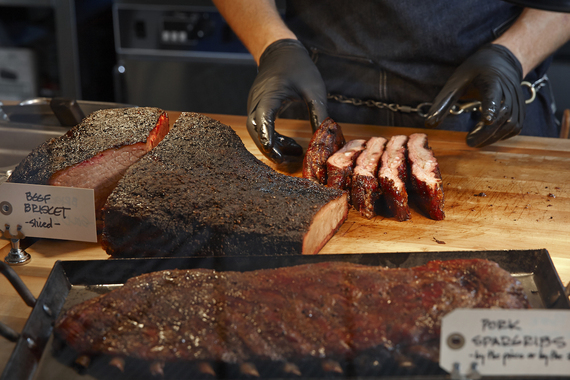 At Maple Block Meat Co. in Los Angeles, a crisp lager is a great drink to wash down a serving of juicy beef brisket or pork spareribs.

Pilsners
Pilsners tend to be golden in color with dry, crisp and somewhat bitter flavors. These beers are good matches for semi-soft cheeses like Muenster, Havarti, American and Monterey Jack, as well as light seafood, tuna, salmon, Asian and Mexican fare. 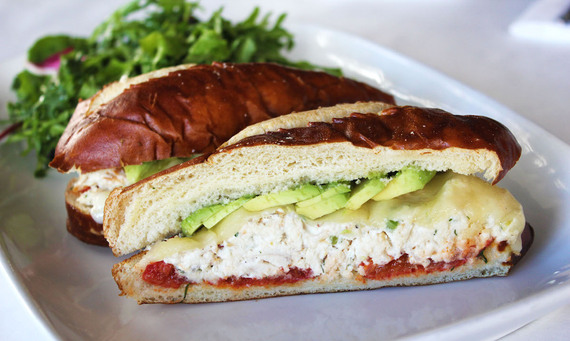 At Caulfield's Bar and Dining Room in LA, the house-smoked tuna melt with oven-roasted tomatoes, avocado and Havarti on a pretzel bun would be heavenly next to an ice-cold pilsner. 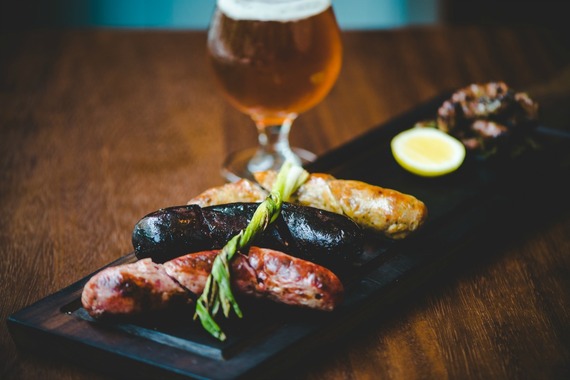 Awesome with many cervezas (Spanish for "beer") but especially pilsners, Latin-inspired Rural Society in Washington D.C. serves up a hearty selection of house-made sausages with smoky, charred scallions.

Bock
Bocks are malty, sweet lager beers that are light copper to brown in color and have toasty flavors. They pair well with creamy, nutty cheeses like Gruyere, Emmenthal and Swiss, as well as Cajun food, chicken, beef and sausage. 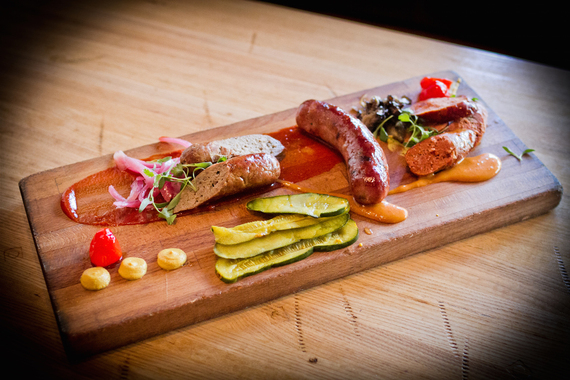 At The Pig in Washington D.C., juicy wursts -- sausages of pork, beef and/or veal -- are served up with pickles and mustards and make great matches for many of the craft beers on offer, including several tasty lagers.