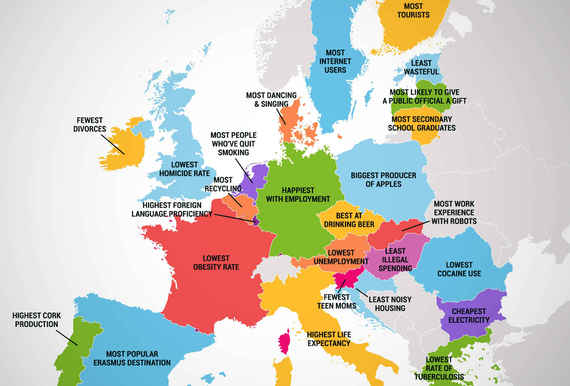 Credit: All images by Thrillist/Jennifer Bui

The European Union has 28 member countries, and much like snowflakes, they're all special in their own way. You already know what each country is worst at. Well, every country excels at something, too -- and to that end, we found one thing every EU nation is the best at... even if it's having the most experience working with robots.

Click here to see the full map, or on the stats to see the methodology. 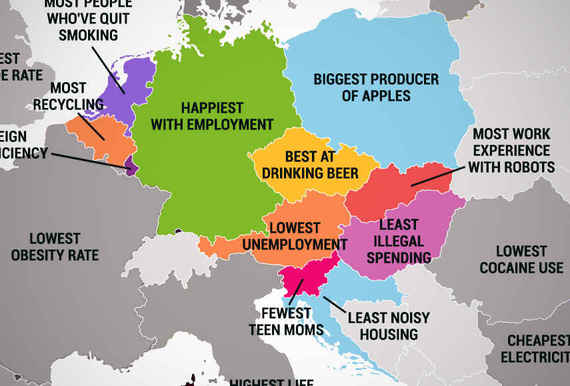 Belgium: Most recycling
Originally, it looked like Belgium was going to reign as "Most Van Damme." But alas, Time Cop is pretty much Hollywood-only these days. Instead, Belgians ranked best at recycling packaged waste. They may not be burning their trash like the Swedes, but Belgians sure do know what to do with those boxes they get from Amazon.

Bulgaria: Cheapest electricity
Bulgaria is the place to be if you've got a roommate who never shuts off the lights after leaving the room. The only problem: it means you live in Bulgaria.

Croatia: Least noisy housing
Croatians get the most peace and quiet, with only 10% reporting they suffer from hearing noise at home. But what about houses with super creaky floors, eh, Croatia? What about that?

Czech Republic: Best at drinking beer
Out of all the things to be best at, the Czech Republic has the coolest bragging rights. Czechs have the highest per capita beer consumption in the world, at a yearly rate of 148.6 liters per capita. And all this in a country without sororities or fraternities.

Denmark: Most dancing and singing
Here's a sleeper statistic: 35% of Danes report having danced in the past 12 months, and 38% report having sung. If you were to lay odds on which countries did these most frequently, Greece would be a 2:1 favorite, Italy at 5:1, and Denmark would be 400:1. Thanks for being good at everything, Denmark. 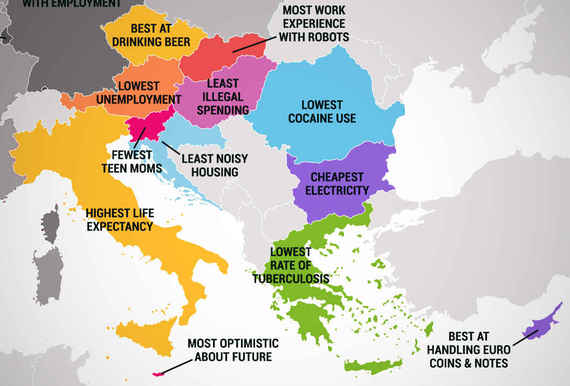 Estonia: Least wasteful
Belgians might recycle more than anyone else, but the good people of Estonia are the least wasteful altogether. Just imagine Estonia as your neighbor who squirrels away old lawnmower parts, only to figure out how to get your broken down car running again with them in six months.

Finland: Most tourists
Finland: Tourism capital of Europe. It's true. Well, in terms of residents who actually go on trips, seeing how 88.5% of Finns have taken an overnight trip for personal tourism in the past 12 months. That's gotta be some kind of record.

France: Lowest obesity rate
It's hard to believe a country that was founded on soft cheese, baguettes, and surrendering could have the lowest obesity rates in Europe -- but it's true. Perhaps France just had eating well down to a science before junk food really came into the picture.

Germany: Happiest with employment
This is the least shocking "best" on this list. The most highly populated country in the EU, Germany, still manages to have enough jobs to go around. Germans = efficient.

Greece: Lowest rate of tuberculosis
Here are three things Greeks love: eating food their mothers made, talking smack about the Turks, and not having tuberculosis. The country has a rate of only 5 cases per 100,000 inhabitants.

Hungary: Least illegal spending
Everybody pays for things that don't get taxed sometimes, like when you pay a babysitter, buy from a lemonade stand, or decide it's easier to just hire henchmen and pay them in sacks of money with "$$$" printed on the side. Some countries do a lot of off the record economic activity (**cough** **cough** Italy), and others, such as Hungary, reportedly do very little.

Ireland: Fewest divorces
Ireland has the lowest divorce rate and also the highest fertility rate, keeping in motion its plan to never break the stereotype of the Irish-Catholic family with more kids than a goat farm.

Head to Thrillist.com for the remaining EU countries and find out what they're best at!