...and Why It May Determine the Next President

If you really want to understand the unfolding presidential race, check out a little-known economic theory called "public choice." Public choice theory argues that economic self-interest is the driving force of politics. According to public choice theory, people will vote for the candidate that they believe is going to give them the greatest access to more money.

Public choice theory was developed by economist James Buchanan in The Calculus of Consent, a seminal book he co-authored with Gordon Tullock in 1964. Initially, Buchanan described himself upon entering the University of Chicago's graduate economics program as a "libertarian socialist." After six weeks there, however, he recalled later, he had become "a zealous advocate of the market order."

Buchanan and Tullock co-founded the influential academic journal Public Choice, and Buchanan continued to explore the relationship between economic self-interest and politics throughout his career. He also proposed a fascinating distinction between two levels of public choice:

The first level, Buchanan argued, is like setting the rules of a game, while the second is like playing the game within the rules. In 1986, Buchanan was awarded a Nobel Prize in economics for these insights.

As Buchanan famously remarked, public choice is "politics without romance." People, he argued, vote in their best economic interest, period. Under public choice theory, for example, a person working for a local government -- whether in the school system, or on the police force -- will be more likely vote for a government that increases taxes, because the voter expects some of that increased tax revenue to come his or her way in the form of higher wages or more work. 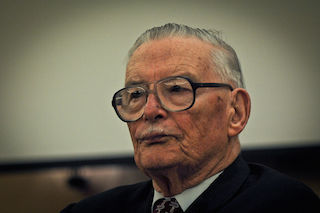 Let's look at another example: If a candidate promises additional resources towards law enforcement and drug control, prison guards will benefit and should therefore be more likely to vote for that candidate. A candidate promising smaller government with less spending and taxation will be less appealing to a prison guard and more appealing to a small business owner, who will hope to benefit from having to pay lower taxes and being able to keep more profit.

Buchanan argued persuasively that most people have a strong sense of how changes in government will benefit them. This relationship between voters and their self-interest drives all types of political involvement and action -- not only voting, but also fundraising, lobbying and grassroots organizing -- according to public choice theory. 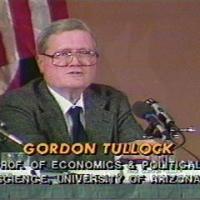 Big corporations and industries spend hundreds of millions of dollars advocating for their economic interests. It's easy to find examples of powerful industries lobbying in our country today: the sugar industry, the defense industry and the prison industry are just three that spring to mind. For this very reason, many people today see American elections (as well as those in other countries) as little more than a competition between those with the deepest pockets. Often this dichotomy has translated into a war between those working for government interests and those working for private ones.

In 1975, Berkeley PhD student Herman M. Levy (who went on to become a beloved and distinguished college professor) studied the voting patterns for the Agricultural Labor Relations Act, which he had a hand in drafting. The results of his study supported Buchanan's theory of public choice that, in general, people vote based on their economic self interest. Those working for government agencies voted against the Act that would not directly benefit them, and those in the private sector voted for it.

Levy's advisor, Bill Niskanen, was head of the economics department at Ford Motor Company, where I worked as a financial analyst after earning my MBA. Niskanen became my mentor in the use of economics to analyze voting behavior, and a few years I revisited Levy's study while seeking to analyze how people voted on Michigan's Tax and Expenditure Limitation Amendment. 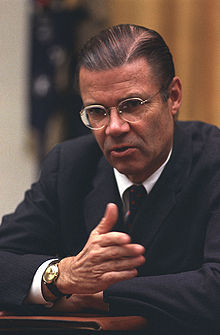 I published a paper about my research Public Choice in October 1979.

My work showed that indeed generally people be expected to vote their economic self interest, but also that the voting could be influenced by advertising campaigns altering people's perception of their economic interests.

The Headlee Amendment -- named after the political leader who advocated it -- ultimately passed in Michigan, limiting state expenditures to 9.96% of total income. Today the amendment is still credited with keeping the state of Michigan on a balanced budget -- in stark contrast to many states; the Federal government which has $16 trillion of debt; and even Michigan's own city of Detroit, which is $19 billion in debt.

So think about it -- which candidate are you leaning toward? What is influencing you in his or her favor? For starters, during this national election season, every American should carefully analyze how each candidate's policies will influence government spending at national, state and local levels. By doing so, all citizens will be empowered to weigh their own economic interests against any other issues that carry personal import.