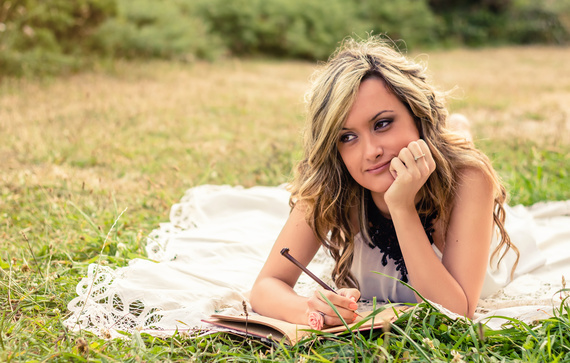 April was a crazy busy month -- the kind of month I used to pride myself on because I could look at my accomplishments -- everything I had achieved at the end of the month: launched an ecourse, held three sales calls, recorded 10 or so interviews, and received three awards -- on top of my normal daily tasks. But at the end of the month, instead of feeling proud, I felt lonely; instead of feeling accomplished, I felt overworked and overwhelmed. Once again, I had done such a good job teaching everyone else how to be, that I forgot to Be myself.

So this past week, as April turned to May, I took stock of my life -- looked at my goals -- personal and professional. Took a hard look at my life. And this is what I figured out: Yes, I worked so hard that I won three awards in one month. Yet, while I am proud of my accomplishments, they came with great costs. In getting my needs met, in finding myself through work, I also lost myself. Once again I let someone else's expectations define who I am and what I do. I forgot that I was a person of worth just because I'm me. And I was saddened. Because I did it again; because I thought I knew better. Because I fell into a trap of my own making once again.

So I sat down and wrote myself a letter. It didn't start out that way. I had intended to do some release work and write a letter to my ex. But as I wrote, I realized the person that needed to hear this most was me.

Sometimes you don't know who you are until you lose who you are. And I did -- with my ex-husband Jeff, with my ex-boyfriend Rio. I think I might have caught a glimpse of myself when I was 40 -- just a brief one -- in between healing from my divorce and running into the arms of another man that I hoped could fix me -- and do a better job than my ex had ever done at it.

Of course that notion was fundamentally flawed -- you cannot fix what was never broken to begin with. But I didn't get that -- not for a while. I thought I needed a man -- to fix me, to "complete" me. I'm not sure where I got this idea -- maybe from all of those fairy tales I read as a child. And so a few months after my divorce, I started looking. I assured my friends, my therapist, myself that I wasn't looking. That I was taking much needed time to heal, to be. That the men I was talking to were just for fun -- that nothing was serious. That was why none of them lived in my town -- I could flirt without the vulnerability of getting my heart broken. Of course, it didn't work. Not truly. Because I was lying to myself; I was still looking, searching for that one man -- my Soul's Mate, my Twin Flame, my other half. The man who would see all of my flaws and love me anyway. The man who would complete me, heal me.

I thought I met that man. And in some ways I did. He was exactly what I needed at the time. I thought he was the "one." He wasn't. But I couldn't see that because by then I had lost myself again, was trying my best to please him, was clinging to him as though he was my life's blood, was living someone else's life.

But as I started to realize that he wasn't the one -- which became even more apparent when he stole some of my things and fled to the arms of another woman -- I realized something: I'm strong, much stronger than I thought. I'm brave, more courageous than a soldier facing battle. In fact, I am a Goddess in my own right. I always have been -- I just buried that part of me on the inside, left her tucked away in a dark closet where no one would ever see her. For fear I might upset someone, cause someone pain, be judged. And all of those fears came true -- I upset myself, I caused myself pain, and I judged myself harshly.

But that's all in the past now. So my dear I need you to know this:

I'm finally coming home -- to the me I was meant to be. And let me tell you something: she's pretty awesome. I think you'll like her.

She's a little taller than me, wears her head held higher.

She's a little more outlandish -- it's that purple streak in her hair and wildly colorful outfits that don't always match.

She's confident -- in her abilities, her beauty, her intelligence, herself.

She doesn't need a man to complete her or to give birth to prove her worth.

She sits high on her throne -- not as a Princess waiting for her Prince, but as a Queen, sovereign in her own right. She rules with an iron fist and an open heart. She is wise, kind, and gentle, but cross her and you will know her wrath. Her judgment is swift, final, and absolute. Yet, she is very forgiving and compassionate and will give anyone a chance to prove their worth, their capability, their loyalty. You are truly innocent until proven guilty in her eyes. But those eyes - oh those eyes - they see into your soul. So don't bother trying to hide from her because she Sees you. And she loves you anyway.

She is the one you've been waiting for.

If you could write yourself a letter, what would you tell yourself?