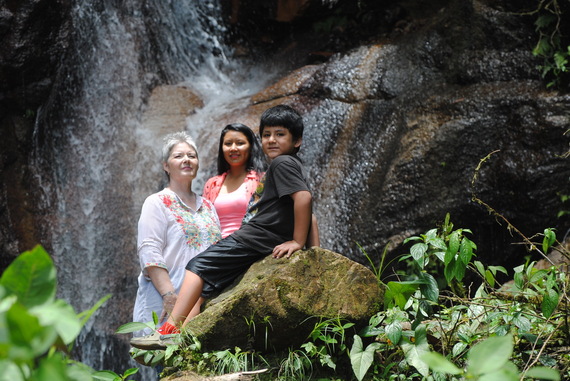 Life is full of coincidences.

Or perhaps it is all pre-ordained, destined to happen.

As a young child in the late 1940s, I spent some of the most idyllic and memorable times of my life in a little town called Shell Mera -- today called Shell -- at the edge of the Amazon rain forest basin in Ecuador and on the banks of the Pastaza, part of the Amazon headwaters at the beginning of that river's majestic four-thousand-mile journey to the Atlantic Ocean. 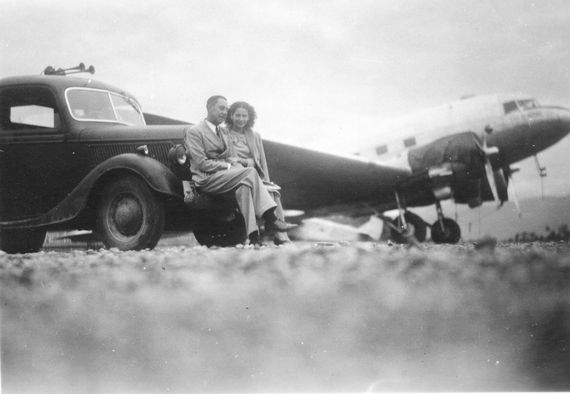 The town was established by and named after the Royal Dutch Shell company that was exploring for "black gold" in Ecuador's El Oriente, a company for which our father worked.

Not far away lived several indigenous tribes, some friendly, some not so.

Some had only recently come into contact with the "civilized world." Deeper still, hiding in the dense jungle, there were tribes so isolated, so "unreachable," that they came to be known as"los no contactados", "the uncontacted."

Our father would show us photographs of his and his colleagues' encounters with members of one of the more friendly tribes (below), or tell us how one of the company's planes had flown low over the huts of some less friendly indigenous tribe, visible through openings in the emerald canopy, and dropped beads and small mirrors trying to establish contact with the natives, only to see them raise their bows and arrows or point their spears and blowpipes at the aircraft. 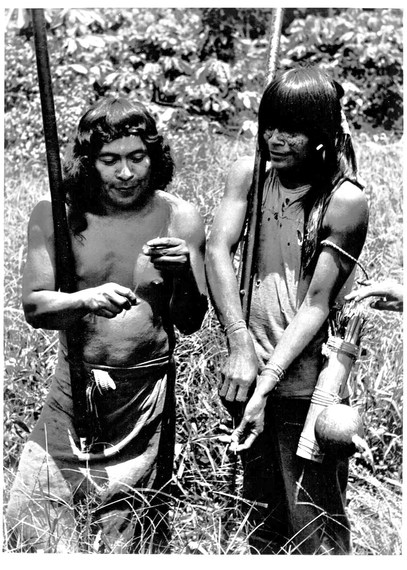 Photo by the author's late Father, Leonardus Kortekaas, who wrote on the back of the photograph: "Chief Taisha, of the Jivaro tribe, and his son, Segundo, with their 16-foot blowpipes, September 1948."

Unknown to me at the time, but according to some reports, "On a few occasions the Indians attacked Shell, resulting in the deaths of several employees."

A few years later, in January 1956, after we -- and Shell -- had left Ecuador's Oriente, five U.S. Evangelical Christian missionaries who had been trying to bring Christianity to one of these uncontacted tribes -- the Huaorani, also known as "Aucas" -- were killed by Huaorani warriors.

Before the tragedy, the missionaries had been, taking off from the airstrip at Shell, flying periodically over the Huaorani settlement, dropping gifts. On what was to be their last flight, they landed near the Huaorani village and set up a temporary camp, named "Palm Beach," on a sandbar along the Curaray River. "Palm Beach" was a mere 60 miles from Shell -- as their piper cup flew. After some initial contacts, including gift exchanges with the Huaorani, tragedy struck five days later. 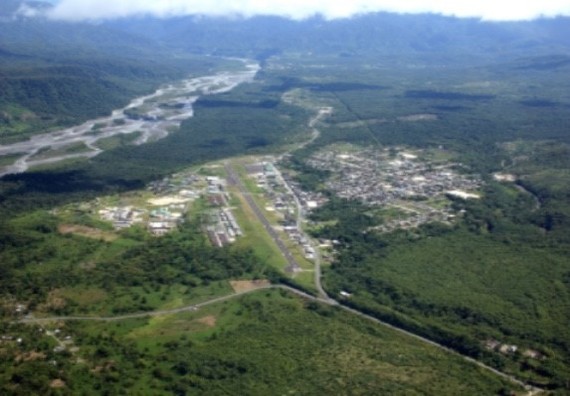 Aerial view of Shell, Ecuador. The runway from which the missionaries took off in January 1956 is clearly visible. Casa de Fe is just off the right margin of the photo.

Many articles and several books have since been written and screen depictions made about the tragedy that came to be known as "Operation Auca," including the 2004 documentary "Beyond the Gates of Splendor" and the 2006 movie "End of the Spear."

As a native of Ecuador who lived so close to "Palm Beach," I was affected by that horrific event. It became the subject of my very first and very nervous formal speech at the U.S. Air Force's Officer Candidate School a few years later.

But, except for some writings on the threats posed by re-emerging oil exploration and exploitation in and of Ecuador's pristine and ecologically vulnerable rain forests (including the Yasuní National Park, a region so precious and so unique, that in 1989 it was designated a UNESCO "Man and the Biosphere Reserve" ), I had not given the events of 60 years ago at "Palm Beach" much additional thought.

That is until about a month ago. At the funeral services for my good friend, World War II veteran John Tschirhart, I finally met face-to-face with Darla Rae, the Denver film producer who is working very hard to immortalize Tschirhart's love-and-war story in a movie, "The French American."

When Rae learned that I was from Ecuador, she told me about a documentary she recently produced in, of all places, Shell, Ecuador.

The main character in the documentary, "Casa de Fe" (House of Faith), is an amazing woman: Patti Sue Arnold, a retired U.S. Army Chief Warrant Officer with three combat campaigns and mother of three sons. In 2003, Arnold came to do God's work in a place called Shell -- God's work that has seen a resurgence in places such as Ecuador's Oriente since the five missionaries lost their lives 60 years ago. 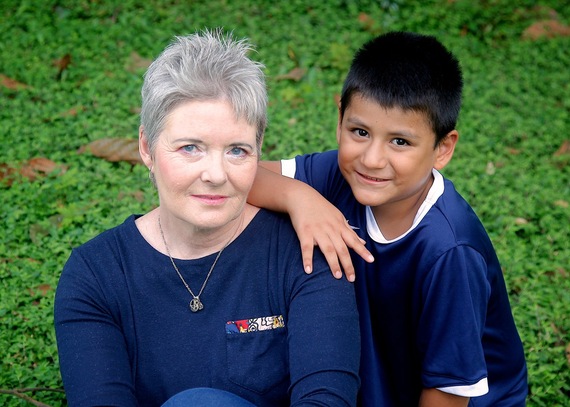 After her arrival in Ecuador, Arnold first spent two years in the capital city, Quito, working for a ministry fixing and fitting wheelchairs and, in her spare time, taking in two foster children.

Once in Shell, Arnold continued to take in abandoned and special needs children until one day she had 10 children and realized -- just as Hope House founder Rose McGarrigle one day also did -- that there just was no more room in her small house.

After years of hard work by volunteers, of getting financial support and -- as Arnold puts it -- of lots of "prayerful manner," Casa de Fe was born, ready to continue to take care of even more children, many with mental and physical disabilities or with special medical, emotional and spiritual needs. Many children come from distant Amazonian jungle villages with no other available medial or social support, often making Casa de Fe their only and last hope. 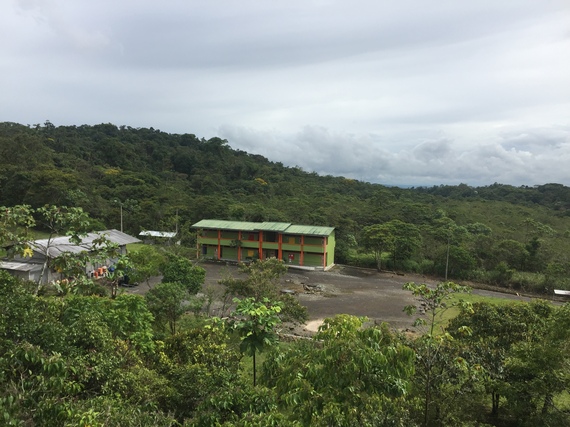 The "population" of Casa de Fe has fluctuated over the years with as many as 80 children being cared for at times and with more than 400 children having been taken care of since its founding.

Presently, Casa de Fe has a population of 57 children, suffering from many different medical conditions, including Down Syndrome, malnutrition, even cancer and cerebral palsy and other congenital anomalies. 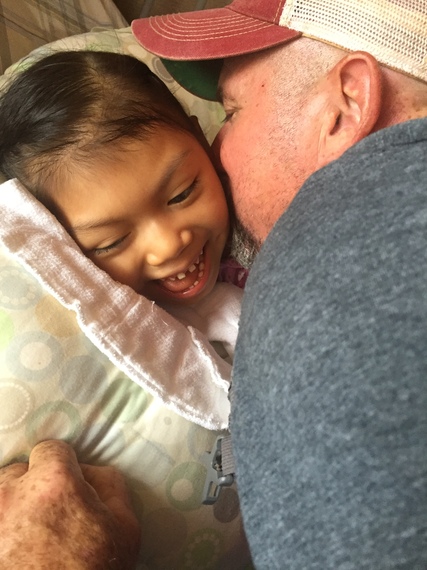 A missionary with one of Casa de Fe's "special children"

Please watch Darla Rae's documentary below, an incredible testament to what one amazing woman, full of faith, goodwill and compassion has accomplished in a place called Shell.

While the circumstances and events that led me to the story of Casa de Fe in the rainforest of Ecuador may be a coincidence, there are no coincidences when it comes to helping the most vulnerable among us -- the children. That has become the life mission -- the destiny -- of one extraordinary American woman.

However, Patti Sue Arnold, wondrous as she may be, cannot do it alone.

To see how you can help Patti Sue with her extraordinary work for God's children, please visit lacasedefe.org and open up your hearts this joyous season.

Unless otherwise indicated, all photos and video are with permission of Casa de Fe.