The Simpsons have had a long history of celebrities making cameo appearances on the show, but what is sometiems forgotten due to the sheer longevity of the series is how different things were in the early years of the show. In a TV Legend a while back about Michael Jackson's appearance in The Simpsons' third season premiere, I explained that in the early days of the show, while celebrities would occasionally lend their voices to the show, they would often use pseudonyms in the credits. In the beginning, there really weren't celebrity cameos, though. Dustin Hoffman and Michael Jackson played other characters, not themselves. The episode that really changed everything was the third season episode, "Homer at the Bat," where Mr. Burns decides to fill his company softball team with a group of ringers made up of famous Major League Baseball players. The episode was a major success and some of the players (like Darryl Strawberry and Wade Boggs) credit the episode with making them even more well known.

A year later, when writer John Swartzwelder pitched the idea of Krusty the Clown getting canceled and then having a comeback special, showrunners Al Jean and Mike Reiss saw this as an opportunity to do another version of "Homer at the Bat," only with other kinds of celebrities instead of baseball players. However, they soon learned that The Simpsons in their fourth season did not yet have the cachet that they hoped for when it came to get celebrities to sign on to do cameos on the show. A whole pile of celebrities backed out of appearing on the show, some of them doing so at the last minute. Before the Red Hot Chili Peppers signed on to perform in the episode, both the Rolling Stones and Wynonna Judd turned the show down (years later, when The Simpsons had become a standard place for celebrities to do cameos, the Stones appeared. I think Judd blew any chance she had of being on the show). Because they were so desperate to add celebrities, the show ended up making a notable concession with one of the possible celebrities, Johnny Carson - they agreed NOT to make fun of him! 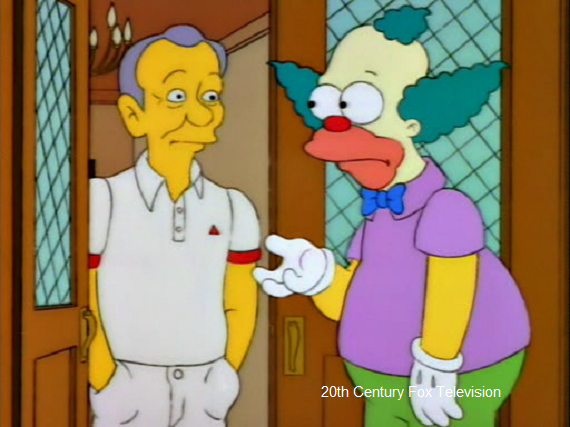 Read on to see how they got Johnny Carson to appear on the show!

Carson had closed out his tenure on The Tonight Show a year earlier in 1992 and had basically withdrawn from the public eye, so getting him to do the show was no small feat. The other celebrities in the episode varied in difficulty, from Luke Perry (who agreed right away) to Bette Midler (who agreed on the condition that they let her talk about her anti-littering campaign). Their pitch to Carson was that since he was now unemployed, he would be mooching off of the Simpsons. They sent the pitch to Carson's nephew (who was working as a sort of manager for Johnny) and he turned them down. When Jean checked in with him to see why he turned it down, the nephew explained to him that Carson found the joke degrading to him. So Jean and the staff came up with an idea. Just do a 180 degree turn on their depiction of Carson. They depicted Carson as an expert showman, juggling automobiles while singing opera! Carson liked the new approach so they signed him on. 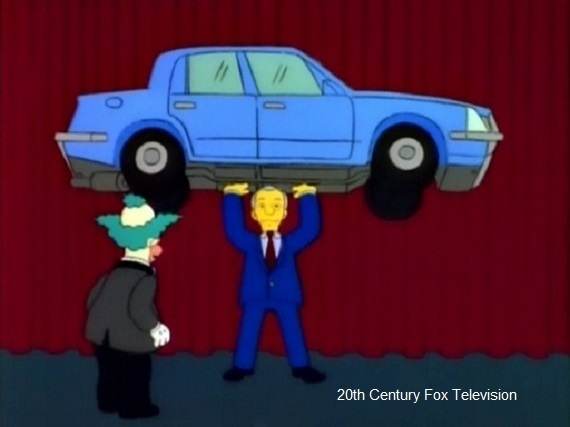 Conan O'Brien has an amusing anecdote about Carson showing up for the recording of his lines (this was right before Conan got Late Night):

I was also there when Johnny Carson came by after he retired from The Tonight Show. He was in a room full of writers who revered him. When Johnny was leaving -- in a white Corvette -- I was outside of the recording stage and he asked, "How do I get out of here?" I kind of panicked. I said, "You go down here and you take a right." And he went, "OK, thank you." And just as his car pulled away. I thought, "Shit! It's a left!" And I kept watching. And sure enough about 45 seconds later, it comes back the other way. And I could just imagine him going, "Stupid kid." I was that stupid kid.


The eventual episode, "Krusty Gets Kanceled," was the Season 4 finale and is one of the most acclaimed episodes of The Simpsons ever, and it set off a long history of celebrities cameoing as themselves.

Be sure to check out my archive of TV Legends Revealed for more urban legends about the world of television. And click here for legends just about The Simpsons!