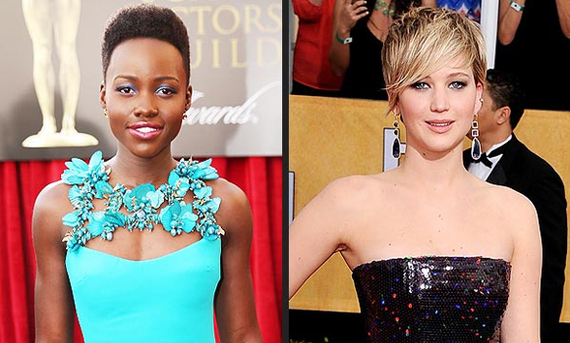 Celebrities may get to live a privileged life -- with designer clothes, hot wheels, spacious mansions, and personal assistants, chauffeurs, makeup artists, beauticians, and stylists. Being famous comes with its perks, but also comes with an endlessly annoying side of being nit-picked about whatever physical element that seems out of place by the not-so famous ones.

Behind all the glitz and glam, celebrities are really just human beings -- like the rest of us. They are burdened by the same flaws, insecurities, and you've-got-to-be-kidding-me-another-pimple moments that all women have. It is little everyday moments of self-consciousness and self-doubt that bind us all together. Hollywood's beauty standards are increasingly troubling and out of range for many normal people. (After all, all celebrities were once unknown people to most of us.) It is so much easier to not attempt to fit a totally made-up, phantom standard of how one is supposed to look.

These famous women have learned to embrace who they are and love it -- all of it. So, let's hear it from Lupita Nyong'o, Jennifer Lawrence, Iman, Emma Watson and a few others on how they are living their life and loving who they were made to be:

Iman, O, the Oprah Magazine, 2000
"[A]s a young girl, I was much more preoccupied by my flaws. Everyone teased me because of my long, skinny neck. To hide my so-called deformity, I was wearing a turtleneck when I was 3! Yet my neck is probably my best asset. At the end of the day, what counts is the entire package."

Barbra Streisand, Glamour, 2013
"I didn't do what people said: 'Change your name, cap your teeth, change your clothes, cut your nose down.' My nose was part of my heritage, and if I had talent to sing and to act, why wasn't that enough?"

Jennifer Lawrence, Elle, 2012
"In Hollywood, I'm obese. I'm considered a fat actress. I'm Val Kilmer in that one picture on the beach ... I'm never going to starve myself for a part. I don't want little girls to be like, 'Oh, I want to look like Katniss, so I'm going to skip dinner' ... I was trying to get my body to look fit and strong -- not thin and underfed ... I eat like a caveman. I'll be the only actress who doesn't have anorexia rumors."

Gabourey Sidibe, Oprah, 2009
"My first diet started when I was six years old. I've never been a small girl. One day I had to sit down with myself and decide that I loved myself no matter what my body looked like and what other people thought about my body ... I got tired of feeling bad all the time. I got tired of hating myself."

Lupita Nyong'o, Black Women in Hollywood Luncheon Speech, 2014
"I remember a time when I too felt unbeautiful. I put on the TV and only saw pale skin. I got teased and taunted about my night-shaded skin. And my one prayer to God, the miracle worker, was that I would wake up lighter-skinned ... What does sustain us ... what is fundamentally beautiful is compassion for yourself and for those around you. That kind of beauty enflames the heart and enchants the soul ... There is no shade in that beauty."

Meryl Streep, O, the Oprah Magazine, 2003
"I say to myself, 'I don't know how to act -- and why does anybody want to look at me on-screen anymore?' ... Lots of actors feel that way. What gives you strength is also your weakness -- your raging insecurity."

Emma Watson, Glamour U.K., 2012
"I've accepted my body shape more as I've got older. I went through a stage of wanting to have that straight-up-and-down model look, but I have curves and hips, and in the end you have to accept yourself as you are. My weight has fluctuated between a size 6 and a 10. When you're growing, your body is still figuring itself out and it takes a while to settle down. I keep telling myself that I'm a human being, an imperfect human being who's not made to look like a doll, and that who I am as a person is more important than whether at that moment I have a nice figure."

Lea Michele, GQ, 2010
"I was one of the only girls in my high school that didn't get [a nose job]. And if anybody needed it, I probably did. But my mom always told me, growing up, 'Barbra Streisand didn't get a nose job. You're not getting a nose job.' And I didn't ... That's why I'm proud to be on a positive show and to be a voice for girls and say, 'You don't need to look like everybody else. Love who you are.'"

America Ferrera, Cosmopolitan for Latinas, 2012
"More often than not, I hate photos shoots and I hate being on the red carpet. I don't think I'm very well equipped for the scrutiny or the pressure to be perfect, and I don't think anyone really is. People are saying 'We love you and love what you do,' and you're sitting there thinking, 'I'm not skinny enough or pretty enough.' It's taken a lot of work to get over that ... How much time have I wasted on diets and what I look like? Take your time and your talent and figure out what you have to contribute to this world. And get over what the hell your butt looks like in those jeans!"

Beyoncé, Shape
"I wrote 'Bootylicious' because, at the time, I'd gained some weight and the pressure that people put you under, the pressure to be thin, is unbelievable. I was just 18 and you shouldn't be thinking about that. You should be thinking about building up your character and having fun and the song was just telling everyone just forget what people are saying. You're bootylicious. That's all. It's a celebration of curves and a celebration of women's bodies."