Sometimes parenthood means taking one for the team. Like when you bring home a new toy for the kids, but it comes in 12,686 pieces. So, Dad puts it all together while blissful children eat ice cream -- and Mom snaps a photo.

Yes, this is parenting. 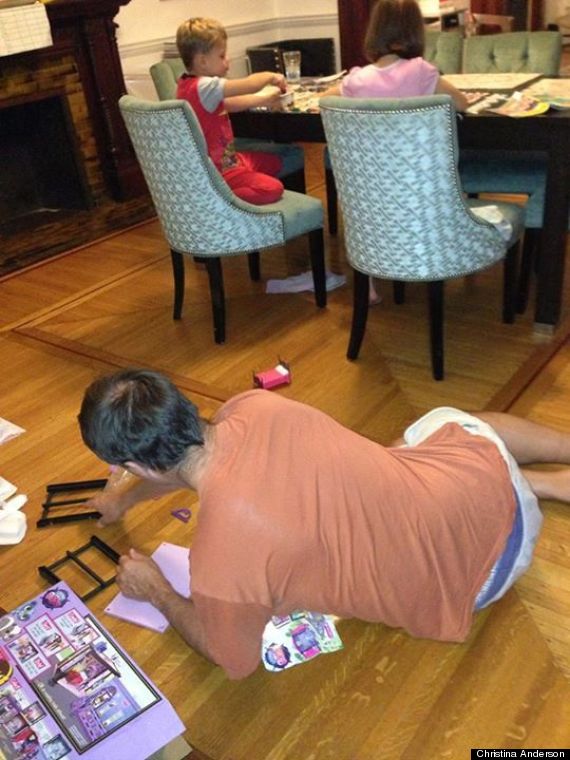 Here, it was HuffPost Family and Relationships editorial director Christina Anderson's family, but her anecdote got us wondering what other images sum up the experience of having small children. We asked our Facebook fans, and were treated to hundreds of hilarious and touching photos.

As a bonus, almost all of them featured dads, front and center.

Author Doyin Richards, of Daddy Doin Work, likely could have predicted the outpouring of awesome dad moment pictures. He already collects posts like this on Instagram, and has shared some of the best submissions here on HuffPost.

Consider this batch of pictures the sequel to Richards' post. Because in 2014, dads are more involved in their childrens' lives than ever, and the more images of modern fatherhood the world sees -- from messes to manicures to multitasking -- the better.

1
Jennifer DeTolla
"This is football Sunday!"
2
Heather Kalenak
"One of my favorite pics of my husband and daughter. She wasn't even a month old in this picture. When he is home, she is with him. No matter what he's doing! Still like this 2 years later."
3
Angela Mangrello Miller
"Dad fixing the rainbow loom while watching the game cast on the iPad."
4
Jennifer Elaine
"Daddy lets them give him a spa makeover at their slumber party."
5
KayCee Hall
"Daddy mastered the double hold so he could eat dinner. #twins"
6
Summer Horton Pradera
"One of the many, many reasons why I love him."
7
Rebecca Walsh Hevel
"Daddy will sing karaoke at Legoland all by himself!"
8
Rebecca Brower
"After dinner, pre-clean up, kitchen-yoga. Aka: stalling"
9
Ilse Fuentes
"Daddy naps at aquarium while son proceeds check up"
10
Sarah Murphy Mannheimer
"Bring your daughter to work everyday. #thisisparenting"
11
Dulce De Abreu
"If your child can't sit still at a restaurant, join her, why not?"
12
Adriana Dolden
"Sometimes, u gotta do stuff just to make your kids happy"
13
Kaylyn Skellington Hansen
"Parenting is a workout!"
14
Jamie Schmidt
"My daughter and her step dad on her first day of school"
15
Karen Than Myaing
"#parenting is bringing your infant to an adult party!"
16
Erica Gilchrist
"Pile on!!!"
17
Tracey Queenb Collins
"New daddy mastering selfies with his son!"
18
Mindy Kern
"Tea party with Daddy!"
19
Mary Lee Stagner
"'Giddy up! Giddy up!' #bestdaddyever"
20
Amber Bahr
"Guitar with Daddy"
21
Shijo George
"Sleeping like a baby! Literally :))"
22
Cathy Crooks
"3 year old thoughtfully gave Dad an armrest so he could catch up on some reading for work"
23
Jillian Buck
"'Watching the toddler'"
24
Karin Tyson
"My daughter was up all night from a cold, so naturally, we were too. Both were exhausted by the time we got to the doctor's office. Hahaha."
25
Sarah Wall
"Life as a hard working Daddy to twin toddlers!"
26
Justin N Natalie Bradley
"This sums up our nights on the weekends."
27
Alix Simonette
"Ahh, nothing like a lovely princess nap on Christmas morning."
28
Sam Sonali Sonali
"Granpa Babysitting...lol"
29
Whitney Howarth
"Baby and papa trying out their new shades after arriving in USA from India! Hipster chic groovy!"
30
Susy Rebolledo
"When your birthday becomes 'their' birthday"
31
Aparna Gupta
"My 4 year old is super busy cutting paper into small pieces while his dada is working on his laptop"