I hated Father's Day until I had my own children. My father left when I was 9 and died when I was 19 from drug and alcohol addiction. Father's Day always served as a reminder that he wasn't there anymore, and he wasn't coming back. I didn't cry at my father's funeral. In fact, I didn't cry until almost a year later. I was in the shower, and sat down on the tile, and cried until the water ran cold. I didn't cry because I'd lost him; I cried because his death meant that he'd never turn around his life, get clean, and become the father I always wanted.

In the five years between my father's death and the birth of my first child, I often volunteered to work on Father's Day, and if I didn't work, I'd spend the day in the mountains, getting away from happy families celebrating their fathers, because they reminded me of what I didn't have.

The first Father's Day with my son was nothing special to anyone but me. He was a just a few months old. My wife kept it simple. Mel made me a cake and got me a card with a handprint from Tristan. I gazed at that card for some time, mapping out the crevices in my son's hand. Even at that young age, I could see that Tristan had my father's hand's, short slender fingers with a square palm. I thought a lot about my father as I looked at that handprint, and I didn't feel heartbroken like I used to when thinking about my father on Father's Day.

I knew that Tristan would never have to feel that sort of abandonment. He wouldn't know what it was like to long for a father. To look at other fathers playing with their children at parks, or teaching them how to work on a car or mow a lawn, and wonder what made that kid special enough for his father to stick around.

That first Father's Day with my son, I made a commitment to be with him. To never abandon my family.

We have three kids now (one boy and two girls). I've never sat them down and told them about how difficult the third Sunday in June had always been for me until they came along. Honestly, I don't know what good it would do. Telling my kids about my sorrow on Father's Day would be a lot like the times my grandmother told me stories of going without during the Depression. She could've told me stories all day of eating little and living in a dirt floor house, and I'd still never understand why she washed and reused every disposable margarine container she ever bought.

Not having a father showed me that there is so much more to Father's Day than receiving a tie, or a Teenage Mutant Ninja Turtle lunch box that I will most likely never use. It's about more than cake and cards. It's about more than my kids showing me appreciation. In a world where fathers abandon families like failing franchises, Father's Day is a yearly reminder to my children that I am there, that I care, and that I'm not going anywhere. 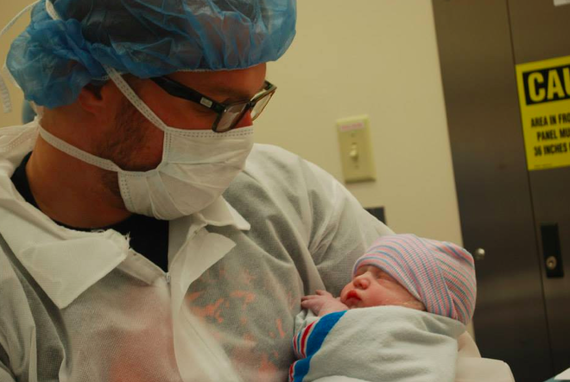 Clint Edwards is the author of No Idea What I'm Doing: A Daddy Blog. He lives in Oregon. Follow him on Facebook.

This post is part of HuffPost Parents' Father's Day series, exploring the lessons our dads taught us about parenting.