One might think that, by turning Martin Luther King, Jr., into a cultural icon and electing a black president, America has bid farewell to its racist past. Recent events in Ferguson, MO, New York, and Phoenix, however, blow holes in that fantasy.

Only by neutering King could America iconify him. Virtually anyone can resonate with the "I Have a Dream" King of 1963. But the "Beyond Vietnam" King of 1967 makes us squirm in profound discomfort.

King first delivered his most controversial speech at New York's famed Riverside Church on April 4, 1967. It was one year to the day before his assassination. In "Beyond Vietnam," King confronted head-on America's evil triplets: racism, extreme materialism, and militarism. "I speak," said King, "as one who loves America." He did, but it was tough love. So tough, some say, it sealed his fate as a martyr. For siding -- as a matter of conscience and Christian faith -- with anti-war protestors, King was pilloried by the establishment and by those of his own movement who felt he had betrayed the cause by linking Vietnam with civil rights.

If Ferguson, MO, tells us anything, it's that King was dead-on about America. 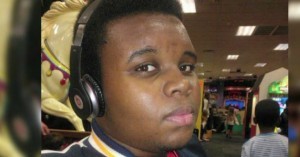 The August 9 shooting death of unarmed black teenager Michael Brown is symptomatic of societal ills that have poisoned America's soul, evils about which King prophesied nearly five decades ago. Racism has once again reared its ugly head, fueled by extreme economic injustice and militarism. America will never fully turn the corner on racism until it cleanses its soul of greed and addiction to war.

Racism: The details surrounding Michael Brown's death remain murky. Because of the prosecutor's bizarre handling of the case and the grand jury's subsequent dismissal of the charges against Darren Wilson, the white officer who shot Brown, we may never know answers to essential questions. But these things we do know:

• Whereas Ferguson, MO, is 67 percent African-American, its police force is nearly all white.

• America leads the world in incarceration rates per capita, but incarcerations are not equitably distributed.

• In America, a black man is nearly six times as likely to be incarcerated as a white man. A Latino, nearly three times.

• In America between 1970 and 2010, a black man was 2 to 8 times more likely than a white man to be shot and killed by a police officer (depending upon the decade).

This we also know. Unarmed, Brown was shot at least six times, twice in the head. In a nation that proclaims "liberty and justice for all," such incidents should be tragic anomalies. Instead, they are sickeningly common. On February 26, 2012, Trayvon Martin, an unarmed black 17-year-old, was fatally shot by neighborhood vigilante George Zimmerman. Martin's "crime"? Looking suspicious and wearing a hoodie. Zimmerman was acquitted. On July 17, 2014, Eric Garner, a 43-year-old black man was choked to death after being arrested by NYPD officer Daniel Pantaleo. Garner had repeatedly yelled, "I can't breathe," before succumbing. Garner's crime? Illegally selling loose cigarettes. On December 3, a New York grand jury refused to indict Pantaleo. While I was writing this article, a white policeman in Phoenix shot and killed Rumain Brisbon, an unarmed, black, 34-year-old father of four.

Our justice system is hideously deformed. In late 2007, Wall Street banksters brought the U.S. economy to its knees, precipitating 4 million home foreclosures between 2007 and 2011 (with another 8.2 million foreclosure starts). Not one high-profile player has been prosecuted, much less convicted. What has become of our sense of fairness when we allow lethal vigilante justice -- the modern guise of lynching -- for suspected or petty crimes while overlooking crimes so egregious they wreck the lives of millions of families and individuals?

Militarism: Polls reveal a stark racial divide in perceptions regarding Michael Brown's death. Whereas 37 percent of whites concur that the incident "raises important issues about race," 80 percent of blacks concur. But there's an aspect about Ferguson upon which blacks and whites, conservatives and progressives largely agree. Following August's massive protests in Ferguson, the conservative news weekly US News and World Report ran an article titled "Ferguson and the Militarization of Police" (August 14). These largely peaceful protests had been met by a chilling display of police power. Americans of all stripes were shocked to see military Humvees -- still in camouflage and mounted with machine guns -- in the hands of municipal police. The presence of MRAPs (Mine Resistant Ambush Protected vehicles) and SWAT teams of police in full riot gear, bristling with automatic weapons pointed at a lone protestor with hands up, have provoked many to wonder: "Have we become a police state?" Likely so, according to US News, quoting Tom Nolan, a SUNY professor and 27-year veteran of the Boston Police Department:

Have no doubt, police in the United States are militarizing, and in many communities, particularly those of color, the message is being received loud and clear: "You are the enemy."

It is inevitable that a nation perpetually at war eventually turns the war machine upon its very own.

Economic Injustice: Income inequality in the U.S. is at record levels, the highest since the Great Depression. Globalization and neoliberal economics -- aka "free-market fundamentalism" -- have gutted the middle class. Traditionally disadvantaged groups -- predominantly blacks and Latinos -- are particularly hard hit by widening economic disparity. There's an inevitable link between economic injustice and crime. My own community, for example, is now considering the construction of a new jail, the old one having exceeded capacity. Not surprisingly, our community's study finds that, of those incarcerated within the last six months, 69 percent were unemployed and 43 percent lacked a high-school diploma. People without hope turn to crime -- as a last resort, not a first one.

In "Beyond Vietnam," King courageously connected the dots of extreme materialism, militarism, and racism. Racism becomes institutionalized by the collusion of economic injustice and militarism. Economic injustice begets hopelessness among the disadvantaged, those for whom the American dream is but a pipe dream. Hopelessness begets crime. The ruling class -- largely associated with the "military-industrial complex" about which President Dwight Eisenhower ("Ike") warned in 1961 -- is compelled by greed to suppress legitimate dissent rather than permit fair distribution of wealth. The militarization of police is the ruling class' response to widespread despair and unrest. Simply put, our municipal police forces have become the army of the plutocracy.

Nick Hanauer has read the tea leaves, and the future isn't pretty. Hanauer's an unlikely prophet -- an enlightened entrepreneur, venture capitalist, and billionaire. "I see pitchforks," he predicted in the July/August issue of Politico. Plain and simple: America is headed for revolution against the plutocracy if we don't adjust course.

King also saw revolution: "These are revolutionary times. All over the globe men [and women] are revolting against old systems of exploitation and repression, and out of the wounds of a frail world, new systems of justice and equality are being born." However, as a student of Gandhi's principles of non-violence, King called for a "radical revolution of values," not of arms. "We must rapidly begin the shift from a thing-oriented society," he preached, "to a person-oriented society."

The World War II general and Republican president, Ike; the civil-rights icon and martyr, King; and the plutocrat, Hanauer: all three have warned that America's unjust and unfair course is also unsustainable. We haven't listened. How many more tragic, unnecessary, and pointless deaths will it take before we pay heed?

Which future will America choose? A "radical revolution in values," or pitchforks?

Note: I am grateful to Doug Hendren for editorial suggestions.