I'm a bad Catholic. I know this because I have been told countless times that Catholics cannot pick and choose which parts of their faith they want to follow. That's precisely what I've done for a very long time.

I've viewed Catholicism as a buffet, choosing the parts I can stomach. Yes please, to helping the poor in my hometown and around the world. No thank you, to not allowing priests to marry or women to be ordained.

During the height of the sex scandal, I interviewed people who were sexually abused by their priests. They shared their heart wrenching stories, and I sat with them, part of me worried they would ask me my religion. They always did, and I always told the truth, but I almost felt I owed them an apology for choosing to stay connected to something that fostered or protected such evil.

I almost left the Catholic faith after I listened to a priest give a sermon about how the U.N. was a "miserable failure" and the war in Iraq was "good." My husband and I had an awful fight in the parking lot afterwards. Unlike me, he wasn't apoplectic, saying he had tuned out that priest and prayed his own prayers. I, on the other hand, had almost burst a vein in my neck looking around the church during the sermon, incredulous and desperate to find someone whose outrage matched mine.

I didn't leave the Catholic Church, but I did leave that church. 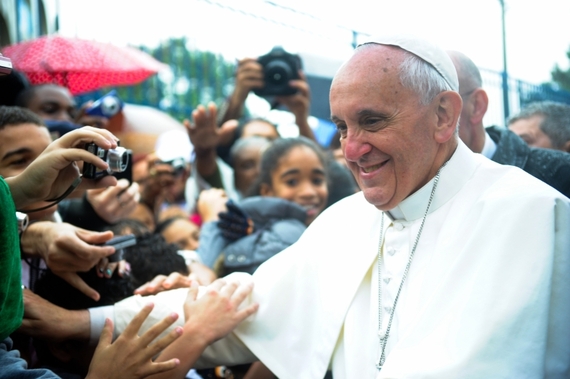 Then along came Francis.

I swear I just smiled typing that sentence.

Pope Francis, who threw off the tall, Popey hat and the ornate, Popey robes and threw out his arms -- to us.

From the backseat of his official car, a plain ol' Ford Focus, he has shaken up the Church in a way I didn't think I would see in my lifetime. Not everyone agrees with everything Pope Francis has done. I don't agree with all of it.

But what I hear him saying is Judge less and love more.

That's also a tall order, because we are brilliant 'judgers.'

Us and them. Them and us. It's quite effective.

Just today, Pope Francis removed more road blocks, making it easier for Catholics to annul a marriage after they get divorced.

I am a divorced Catholic. I still won't annul my first marriage.

It was worth it because it led me to my life today, a place where, dare I say, I just might recommend the buffet.