My recent trip to Washington, D.C. had me thinking about how I fit into the fabric of American life. Ever since the fatal date of September 11th, 2001 I have been at odds about whether I feel truly at home living in America. I've felt like an intruder, having to explain myself to strangers and even friends who wanted to know if I truly love the way of life that I enjoy in America.

Since the September 11th precipice, I have acquired a house, became a permanent resident (legally, Mr. Trump, if you are wondering) and I have had two children who, by default, are Americans. They, unlike me, do not know any other home. They were born here. They will forever have Connecticut, USA inscribed on their birth certificates. So, by the luck of the draw, they are for better or worse fully fledged Americans.

My husband and I were born in a different country, but if you are following my writings you already know this. We tend to be torn between the love for our birthplace, and the love for our adoptive country. I compare us to children of divorced parents who found new partners. Who is the child supposed to love better and in which way? Can a child love his stepmother or a father equally as they love their birth parents? What if the birth mother or a father were not good parents, not dedicated enough, not patient nor loving? Can a child still love them? Can a child yearn for their love, their approval?

These are the questions that all immigrants ask themselves. How do we transcend the connection we feel for our birth country and justify, to ourselves, the connection we now feel for our new country? Just like the Irish and the Italians and the British who came to these shores in the previous century, we feel the yearning for what we left behind, but we also feel hope and love for the new found security and the beauty that we see and feel in the new land, our new adoptive parent.

Many writings, news reports, opinions and more recently the new characters at the political scene are telling my husband and me that we do not belong here. Our religion is a frequent topic in conversations. Does it matter for this piece to state what it is? It's not Christian; that much is important to mention. We are not truly religious people who follow one good book. We are spiritual, and we deeply believe that through justice, patience, love and promotion of peace we can achieve this eternal remembrance. I say remembrance, not heaven, because various depictions of heaven in all the major religions sound too human to be logical to us. So how do we, immigrants, non-Christians fit within American union? Our visit to Washington and Mr. Lincoln provided much-needed guidance.

As we were strolling down the National Mall, there, at the west end of the Mall, stood the Lincoln Memorial. I visited it before, but it's been at least fourteen years since my last visit. I was young and I still believed that America was flawless, perfect really, and I never considered the words from the speech inscribed on the massive wall where Lincoln sits, immortalized for the generations to come and observe and remember. I never thought that people who were born here perhaps did not understand the true meaning of these words. I did not expect them to turn to hatred and proclaim themselves as defenders of freedom by telling us through media that immigrants, Muslims and others who do not fit perfectly with the majority are not American-like. It is all very un-Lincoln like.

I read the words now to my seven-year-old who squirmed the whole time; he would have rather climbed and jumped the steep steps. I imagined Mr.Lincoln giving this speech to him, to me, to millions who now call America their home. The speech is appropriate certainly nowadays, with so many young soldiers dying for the freedom or greed, or domination, depending how you perceive various wars our country is waging now. Regardless, these young men are leaving their blood somewhere, far from home, believing with all their hearts that they are fighting for the justice in the world. But in the end, the internal struggle is always greater than any physical war we can wage. My hypothesis is that we are waging an internal war, on the American soil. We are fighting with our fears for the security of our children, for their future, we are waging a war with the unknown in our midst and we want to protect what is dearest to us. But I can tell you, it is not the immigrants who populate this wonderful country that we should be afraid of. We must not forget that this nation shall have a new birth of freedom in the generations to come, those who came from immigrant parents, my sons, who will love it dearly, those young descendants of Latinos, Arabs, Africans, Europeans and Asians, all who were nurtured within the borders of this free nation.

We, the new immigrants and the descendants, together, must show unity. We must honor and respect those who died to defend the union and the freedom for which it stood. And as the late president Lincoln so eloquently put, "... from these honored dead we take increased devotion to that cause for which they have the last full measure of devotion-That we here highly resolve that these dead shall not have died in vain - That this nation under god shall have a new birth of freedom-And that government of the people by the people for the people shall not perish from earth." 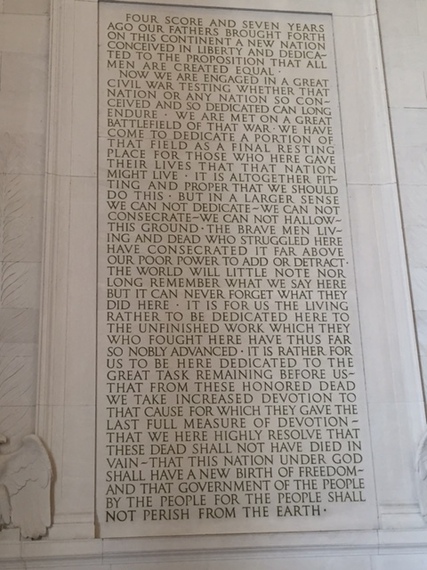 I consider myself to be part of the "people" of whom Lincoln spoke about. I know my sons are part of it. And to those who are trying to smear the image of this free nation I say: Read the words that our forefathers left for us. They might not have had the same struggles that we have today, but they were wise to recognize that our freedom lies in the inclusion of all the people of the union and that the preservation of this union will be left to those who hold memories of their parents and ancestors who came here in search of hope, freedom and justice. We cannot afford to be divided now. Politicians must work harder to present united front for all of us, not just a select few. Our present leaders cannot be slaves to the doctrine of the capitalism, they must first and foremost represent me, my children, your children and the memory of those who fought to preserve what America truly was and still is to all of us.

Forever endowed to the world of ideas! I am a mom, an engineer, an ex-refugee, a writer, a poet and an accidental citizen of the world. www.worldaccordingtoblam.com