For BRIDES, by Jillian Kramer 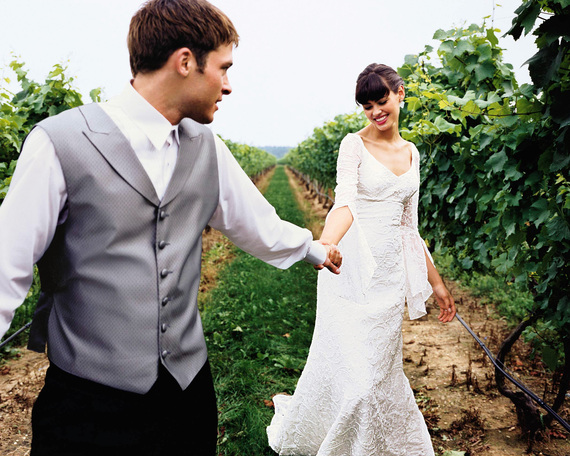 Contrary to what pop culture might have you believe, not all grooms are seized with fear and doubts on their wedding days. In fact, many grooms' first thoughts when they see their brides are incredibly sweet. Need proof? Read on (and maybe grab a tissue, while you're at it).

1. I thought: my bride is breathtaking

Darryl says when he first saw his wife on their wedding day, it was as the first bars of the wedding march sounded, as she stood at the end of a church aisle beside her father. "I was spellbound," Darryl says. "She was always beautiful, but when I saw her standing there, adorned from head-to-toe in white with a matching smile, I thought she was breathtaking. And she was smiling, for me. We gazed at each other for what seemed like an eternity, my eyes signaling my unequivocal approval. If my soul had doubts, they melted in that moment. I couldn't wait to embrace that vision then, and for the rest of our lives."

Related: How To Find The Perfect Wedding Dress For Your Body Type

2. I thought: We're really doing this

When Chris spotted his bride, it was as she walked down 30-some steps to meet him at the ceremony site. "She had her veil on her," he describes, "and there was an aura about her, as she was at the top of a hill." As he watched her descend the stairs, he thought, "oh my God, we're really doing this,'" Chris recalls. "I was also mic'd for the wedding video, so you can also hear me say, 'Oh my God, here she comes!'"

Don spotted his soon-to-be wife on their wedding day as she rounded a corner to walk down their aisle. "My knees buckled. My heart raced. My arms trembled. My stomach grumbled," Don describes. "I was in shock at the gorgeous creature walking toward me. For a brief moment, I wondered how I deserved to be with such a fine [woman]. But when she got up to me, everything was instantly right."

4. I thought: I am the luckiest guy in the world

Thomas and his bride hosted a traditional Vietnamese marriage ritual, which meant they got to see each other hours before the ceremony, at the home of the bride's parents. "She was standing next to her parents," Thomas recalls, "and I felt true happiness and that I was the luckiest guy in the world. Most people think of soul mates as a cheesy, unrealistic concept, but she is my soulmate and best friend. Seeing her for the first time that day, in front of our entire family and with a huge smile on my face, I felt at peace and a strong sense of happiness. From the time we met, we promised each other that we would be honest and truthful and open about everything with each other, and the reward would be us spending the rest of our lives together. Seeing her that day solidified that we did things right and that would be together forever."

Related: 31 Most Iconic Brides of All Time

Clint says he didn't see his bride on their wedding day until she began walking the winding sidewalk path toward their ceremony overlooking the Pacific Ocean. "I call that moment the Sweet Agony," he says now. "It seems like it took forever for her to get to me. The laws of time and physics don't work the same on your wedding day." When he could gather himself, Clint says, "my first thought was, wow! And the closer she got, the more beautiful she became. Finally, finally, finally, she was standing in front of me, stunningly, overwhelmingly gorgeous. It hit me like a ton of bricks: She was my bride. I cried during the vows."

More From Brides.com:
The 10 Best Wedding Dress Looks From Bridal Fashion Week
The 50 Best Places to Get Married in America
The 61 Best Celebrity Engagement Rings
The Best Movie Wedding Dresses EVER