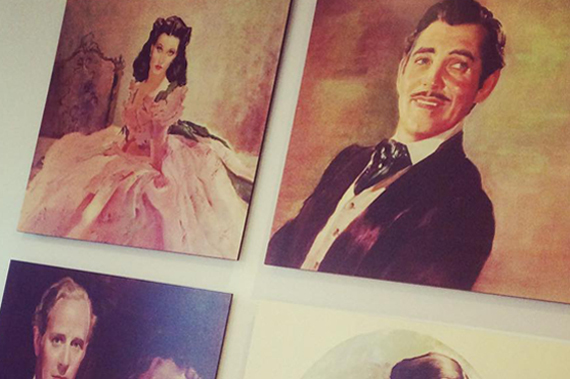 Most of us know that Margaret Mitchell wrote the 1936 novel Gone With the Wind. What you might not know is that if it weren't for her husband's encouragement, this work, and the Academy Award winning film it inspired, may never have seen the light of day.

I discovered this piece of history during my recent tour of the Margaret Mitchell House here in Atlanta. Located in the heart of Midtown, this first-floor apartment is where Margaret wrote 90 percent of her first and only book.

Interestingly enough, this newspaper reporter with only one year of college to her credit didn't set out to write a Pulitzer Prize winning work. Instead, it all started with a broken foot that left her on doctor-ordered bed rest.

Confined to her small apartment -- and believe me, I can vouch that it's indeed teeny tiny -- there wasn't much for Margaret to do. So, her husband John Marsh brought books home for her from the local library. (Back in the 1920s bed rest didn't come with television, video games or iPads.) One day, John told his wife she should write her own book.

Margaret's response? Well, what would she write about? "Write what you know," her editor-by-trade husband told her.

This Atlanta native had grown up hearing tales of the Civil War at every family event. She'd felt the battle wound on her grandfather's head. She was 10 years old before she realized that the South had lost. In her days, conflicted feelings toward the Reconstruction of a city that was burned were still present. She pondered all of this and more, and for a decade poured it into her novel. Hour after hour in that tiny apartment, she sat and wrote at her typewriter.

As I listened to Margaret's journey to becoming a best-selling author, I reflected on the influential power that you and I have in our marriages. Like John did for Margaret, I have the opportunity to positively express influence in such a way that my husband realizes potential that perhaps even he didn't know was there. The same is true for you with your spouse. You and I can, as I recently heard author and speaker Denise Hildreth Jones say, "Write someone's destiny."

Helping to write someone's destiny may sound big and intimidating, but it's not. It simply means that we recognize that the words we speak to our spouse have power and that we should wield them wisely.

What's one way we can do this?

As we take notice of specific strengths and talents, we can use our words to encourage and build up our spouse. For example, say your spouse loves cheering on one of your kids in a team sport, whether it's softball or baseball or maybe soccer. Not only can you point out things like "Wow, I've noticed you're great at inspiring our daughter before her softball games," but you could also say, "I saw that her team needs an assistant coach, maybe you should apply. I bet you could inspire the others kids too." Perhaps your spouse has secretly wanted to coach, but didn't think they were cut out for it. Our words can be just the impetus needed to take on an adventure.

Most of us will never encourage our spouse to pen a best-selling novel. It's more likely our words will point them to something on a much smaller scale than international recognition. Perhaps it means pursuing a longed-for degree. Or having the courage to apply for a promotion at work. It could even be something as simple, but as life-changing, as serving in a particular role at church or within the community. But no matter how it looks in our individual marriages, we can, just as John did for his wife Margaret, help our spouse more richly experience life.

Here in Atlanta, the larger-than-life story that Margaret Mitchell typed in that itty-bitty space has become a part of our city's legacy and fame. People around the world know the name Scarlett O'Hara. And it all started because of a broken foot, bed rest and a man who offered a few life-giving words.

For more stories and thoughts on marriage, check out Ashleigh's book Team Us: Marriage Together and her free ebook 5 Simple Marriage Tools You Should Know. This post is adapted from one that ran on Faithlife Women in November 2014.