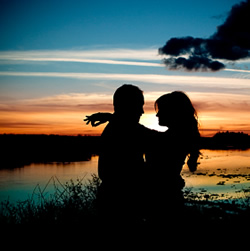 "My idea of a perfect date night is very simple: burger-movie-sex. FYI, this can be in any order."
-Mike U., Las Vegas

I don't think I've ever enjoyed doing research before. In fact, I know I haven't (unless it was taste-testing cupcakes -- but that's another story in a different section). I mean, really, who does? It conjures up memories of spending a beautiful Saturday in the library sorting through the card catalogue to learn all about Lewis and Clark. So it's no wonder that I'd rather just write (or talk) about things that come naturally to me. But after doing my research for this story, let me just apologize to all my teachers and admit that boy, I was wrong.

I LOVE research. If that research is about guys and dating and relationships, then I'll research all the live-long day. You see, this so-called 'simple' species isn't really that simple after all. They might try to make us think that they are, but underneath their charming exterior, there's a lot of thought that goes in to what they do, what they say, how they say it, and why they do the things they do. Lucky for me, I got to be the one to uncover it.

I contacted some of the greatest guys in the country. Ok, that could be a stretch, but for the sake of this article and how forthcoming they were, I'm calling them some of the greatest guys in the country. I'm also fortunate to say I know them all. Maybe that's a case of 'selective-researching,' but I prefer to think of it as going to the World Book of Encyclopedias of Men. Some of these guys are single, some of them are in relationships, others are engaged, and some of them are married--with little ones running around too. But one thing they all are is awesome. For those of them that are taken, you'll wish they weren't. For those that are single, you are welcome. They are hot, clever, smart, intuitive, thoughtful, and amazing guys. And I got them to spill the secrets that they want YOU to know.

Q: What do you wish all women knew about guys?

"Not all guys only care about sleeping with you. But all guys will sleep with you immediately if given the chance. Fact."
-Aaron K., 31, Los Angeles, Author & Comedian, single

"We are problem solvers. Do not tell us about a problem unless you want us to try and fix it."
-Bob M., 31, Chicago, Attorney, in-a-relationship

"If we appear to be too good to be true, we usually are. We are more sensitive than you. We harbor more feelings than you care to know."
-Buck W., 31, Detroit, Social Media Director/On Air CBS Radio, married

"Believe it or not, there are actually 'good guys' out there and we do not finish last. Go for your 'bad boy' type and see how that ends up for you. You know how it is going to end up but you still jump into the deep end of the pool because you think you can change him. Nine times out of 10 you are going to be banging your head against the wall. Avoid the pain and heartache and go for a guy that will treat a woman the way she deserves to be treated."
-Michael M., 37, Los Angeles, Actor, married

"We are not as good as you (when it comes to) communicating and we do it differently than you. We know it can be frustrating, but you need to be patient with us and eventually we will open up and tell you what you want to know."
-Tony B., 40, St. Louis, Financial Services, engaged

Q: What is your biggest pet peeve about women?

"I hate it when a woman won't make a decision but they can second guess without a problem. If you were not part of the choice, then you have no place in the appraisal of its success."
-Michael U., 33, Las Vegas, Casino Manager, married w/kids

"Lack of self-confidence. Women--if a guy is talking to you or dating you, he thinks you are beautiful. No more of this 'I feel fat' or 'I'm so fat, you just want to see the skinny girls at the gym' type of stuff. Also, communicate better. Guys are terrible guessers, so if you want something, tell us."
-Bob M.

"When she doesn't make the fake, reach-for-her-purse move at the end of a date. I'm going to wave her off and pay anyway, but I'd appreciate if she at least played along."
-Aaron K.

"That they're extremely catty to one another and constantly complain about minutia another girl did--which we don't care about."
-Jason M.

"They're too trusting. From my sisters to my wife, I find myself too many times begging for the women in my world to stop talking to strange characters or cohorting with bad co-workers."
-Buck W.

(Author's Note: Um, Buck, maybe you need to just move from where you live. Because if you're wife, sister, mom, etc. are having that many interactions with strange characters, something tells me to get them the hell out of Dodge!)


"Jumping to conclusions without all of the information. I understand women's intuition and some have it, but most don't and it's just guessing."
-Michael M.

"How cruel they can be to each other. I know guys can be bad, but sometimes I can't believe how vicious women can be towards each other."
-Tony B.

Q: What qualities do you admire most about your wife/girlfriend/fiancée?

"Where do I start? She takes care of me better than I take care of myself. She has a smile that will light up any room she walks into, and it all radiates from the person she is on the inside. And lastly, she loves me for who I am without judgment. We all have our past, we just need someone to accept it, and know that the present and the future is a journey that we take together, till death do us part."
-Michael M.

"She is caring, sincere, and a strong leader for the family. My wife is the true glue when things fall apart. Unconditional wasn't just a word she read, but the example she lives by."
-Buck W.

"Her ability to tolerate my 5th grade intellect."
-Matthew H.

"She is calm and does not look for drama in her life. She doesn't get hysterical or irrational if things don't go her way or if she has a setback. I like that she is competitive but it doesn't come out when we have disagreements. I also like how modest she is about her looks and intelligence."
-Tony B.

"I have the ultimate teammate when times get tough. Having someone that you know will love you when your career is troubled, or intrinsically hates somebody who treats you poorly is a great asset. It lets me know that no matter how bad life gets, I have my family."
-Michael U.

Q: If a girl needs to have a serious talk with her boyfriend, what is the best way to bring things up that won't cause him to shut down?

"Do not start with 'we need to talk.' You may as well start with 'I'm about to tell you something that may make you uncomfortable, so begin shutting down!' I think the location is key. It can't be somewhere where there are distractions. We are too easily distracted!"
-Tony B.

(Author's Note: Exactly! Which is what Tony must have been when he was answering this question! Why? Well, he made a great point about not starting off a serious conversation by saying 'we need to talk,' but I was waiting to hear what you should say instead! How do you start it off? I'll ask Tony, but in the meantime, I'm curious to hear what other guys think, and also, if women who have been in similar positions can relate a successful way that they have accomplished a successful talk.)

"Most guys are black and white and we naturally want to fix things. Don't talk just to talk. Bring a problem and expect a solution. If we are assigned a task early in the conversation, we won't shut down. . . .we have to finish any task given to us."
-Michael U.

"Just say it without beating around the bush. We know when you're tip-toeing. We just choose to ignore it."
-Jason M.

(Author's Note: See, ladies, and you thought they often have no clue!)

"Just be honest and come from a place that let shim know that no matter what, you will still love him but there are issues that need to be worked out. Let him know that you are there to help him and not break him down. Avoid putting him on the defensive by accusing or pointing fingers, and most of all--and this is VERY important--LISTEN to him. If he thinks you already have made up your mind and that anything else he says is falling on deaf ears, that is a sure way to get your man to shut down."
-Michael M.

"Just dive in. We can sniff out your little attempts at misdirection much more easily than you think. But wait until the game is over, OK?"
-Matthew H.

"Be direct and clear. And do not use analogies of other couples you may know, or couples from a movie. That is the worst."
-Bob M.

(Author's Note: What are the odd's that Bob's current or former girlfriend said 'But you DO complete me! Tom Cruise and Renee Zellweger said so!')

"There is no magic formula. Just go straight to it. Never postpone important talks just because the time doesn't seem right."
-Michael K.

Stay tuned for Part II next week! I get the guys to answer everything ranging from sex and how soon is too soon to sleep together (although you know what some of them will say!) to if those Facebook relationship status' are really that big of a deal.