It's so easy to slip up as a parent.

I always promised myself that when I had children I would not let them be picky eaters, they would sleep on a schedule, be well behaved, and most definitely would not be allowed to go near any kind of electronic screen before they turned two.

But then reality hit.

...and while she became the most important thing in my life overnight, the other things I still had on my plate did not disappear.

The house had to be taken care of.

Meals had to be cooked.

Bills had to be paid.

Things that I was able to do with my eyes closed became a challenge when I had a child vying for constant attention.

So I started slipping up. I started caving in to my little girl's tantrums and demands for screen time and my electronic devices.

By 12 months, she had discovered my laptop. She absolutely loved music videos and would request specific ones.

By 15 months, she had figured out my iPad and iPhone passwords and could navigate their apps better than I could.

While a small part of me was impressed that my young girl was able to operate such electronic devices, a much bigger part of me felt ashamed and guilty.

I had read a lot about these things -- no screens before 2 years old, only if you are actively engaged with child, interactive apps, no videos, etc....

With every article I read, the shame and guilt grew.

Is it not our job as parents to find ways to entertain our children without technology? To teach them educational and useful things? To read to them? To prioritize them above everything else and spend every available minute we have on their development and well-being?

Maybe it is, but like most parents out there, I still had many demands on my time and so many things to do. With a home to take care of, a family to feed, errands to run, and deadlines to meet, and an inkling of desire to do some things for myself as well, the one thing I promised I would never do became my default mode of operation. 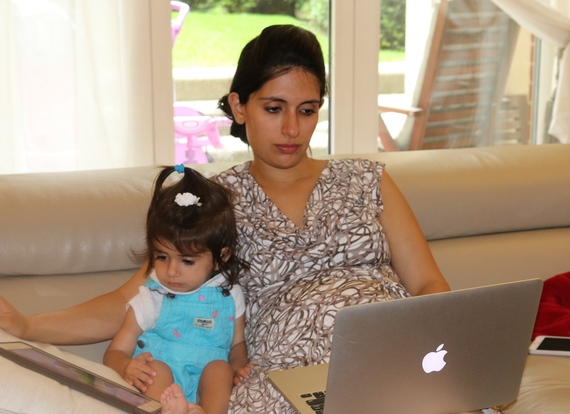 I reasoned with myself:

I need to cook a healthy meal; 30 minutes with a screen won't hurt,

The videos teach numbers, letters, and colors so she's learning something,

Well we're both sitting together so that must count for something,

I have a deadline... she just fell and needs cheering up... we are in a public place... and so on,

The problem with giving in though, is that like an addiction, it eventually takes over. What starts out as a temporary solution becomes a permanent problem.

She stopped going to her bookshelf to flip through books.

Fifteen minutes of TV was no longer enough.

She did not want to sit through a full meal with us anymore.

My daughter is not even two yet!!

She did not learn this behavior on her own. She was, in her own way, imitating someone.

She was imitating me.

The one supposed to be setting an example...

When I took her out, my phone was in my hand. When she played with her puzzles, I typed away at my keyboard. When we woke up in the morning, I was reading the news on my iPad. During bath time, I was responding to messages.

Deep down, I knew this was wrong.

But it wasn't until she broke my heart, until she put a mirror to my face, that I did something about it.

We had boarded a flight, and after we were seated, another family boarded with a crying toddler. My little one furrowed her brow, pouted her lips in distress and frantically said, "baby... baby... wawa" and started rummaging through my bag. She finally pulled out my phone and ran to the crying toddler hoping to settle him with it.

In that moment, I saw what I was doing. I saw the message I was sending.

I can't help you, but this little device will. I can't entertain you or keep you company, but this screen will.

What was I doing?!

I was a stay at home mom, but I may as well not have been.

I felt ashamed. I felt guilty. But most of all, I felt scared.

I was scared of the kind of mother I was becoming and the child I would be raising if things stayed this way.

But fear can be a good motivator.

I picked up my little girl right then, put the phone away, and I whispered something to her. She may not have understood everything I said, but I knew she felt what I was trying to convey.

I'm sorry. We don't need a phone to make things ok, I'm here for you, and I promise you things will change.

And they did change.

They are still changing.

It's not always easy, but it definitely is worth it.

I made a conscious decision and a promise that day to put my screens away. My laptop and iPad were moved from the couch to a shelf, and only taken out when my girl napped. My phone stayed in its charger and was only removed when I left the house. I no longer responded to messages as they arrived but instead did so when my baby slept. If she got antsy while we were out, I would color with her or read her a book or make up silly games.

Yes, some things had to give...

We had pizza for dinner sometimes.

The sink was often piled with dishes.

I missed some deadlines and published less because I didn't always find the time to write.

I responded to friends a full day later sometimes.

Shopping or going out became more challenging when I had to find creative ways to keep a toddler entertained.

But you know what else happened?

Dirty dishes didn't prevent us from having fun.

I didn't lose friends because of my response time.

I realized I was resourceful when it came to entertaining my child and indeed shopping and going out became much more fun for us both.

You know what was even better?

I got a lot more in return.

I got to savor my daughter laughing from deep in her belly as she chased the ducks in the garden.

I enjoyed big warm hugs as she ran into my arms after playing on the swings. 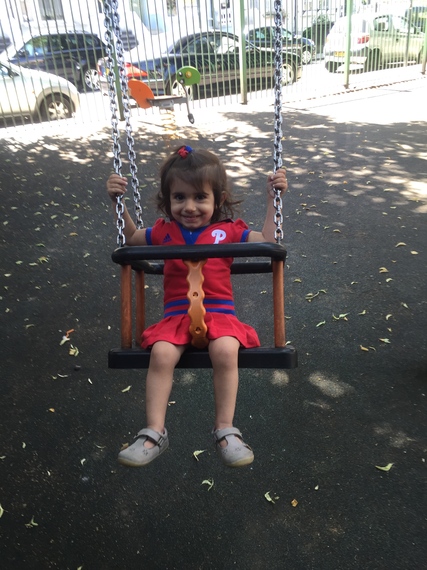 She brought me books to read and surprised me with what she knew.

I got to know her in a way I hadn't before.

I fell in love all over again with a child who is so much more than I was giving her a chance to be.

The more present and engaged I was, the happier, calmer and more engaged she became.

Don't get me wrong, this kind of change does not happen overnight nor is it always easy.

But she's much calmer about it because she knows the alternative can be even more fun.

When we do use screens, we enjoy them together on occasion rather than use them as a pacifier or babysitter.

Some days, I still slip up. But for the most part, things have gotten much better. I also don't feel as guilty now when I do slip because I know it's no longer our default mode of living.

So we are taking each day at a time and dealing with the challenges as they come up. Screens, after all, are an undeniable part of our lives; and if we want our kids to use them a certain way, we need to set the example ourselves.

Because it's not the screens that take over our children's behavior, it's the example we set that determines it.

I learned this the hard way.

We may not notice ourselves doing it, but when we take a minute to observe ourselves through someone else's eyes, we see the kind of example we are setting. Even though we tend to make exceptions for ourselves, when the mirror is finally raised, it's hard to ignore the person looking back.

I didn't like the person I saw looking back at me on that flight. So that day I decide to give some things up. In return, my child gave me so much more and reminded me of how wonderful parenting can be when it's enjoyed without distraction

Cuddling in the morning.

Rolling around in the grass. 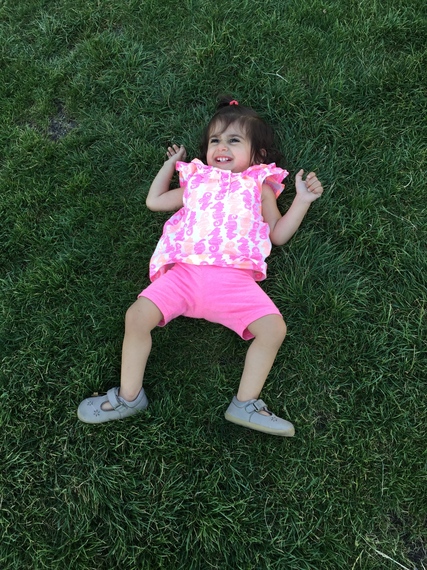 Chasing ducks with food as they run away.

And most of all, watching an amazing person develop in front of my eyes.

Because even after only 20 months, I already see how fast time goes by...

...and when my daughter is all grown up, I don't want to look back on these precious years and not have enough special memories and moments to recall because I didn't take the time to create or cherish them as they were happening.

So we continue with our experiment.

We continue to create moments.

I continue to cherish each of them.

And I hope that one day, when my daughter has her own children, she'll remember just how valuable fully present time with a parent can be.