On Christmas Eve morning, the electricity went off at our house and panic quickly spread among our younger guests.

First, the TV sets went dark. Then, the desktop computers began to die as UPS back up batteries failed. For a while, we were reassured by the sound of familiar alarms, but then suddenly, total silence. Could this be the end times? Is this the onslaught of the apocalypse?

Smart phones were quickly deployed and guests began calling each other from room to room. The panic began to subside when several millennials volunteered communal usage of their wireless data plans. The kingdom would be saved...crisis abated.

My wife and I reassured everyone that our electric bill was paid, while we quietly looked up a receipt to confirm it. To be more certain, I asked my son-in-law to go on a neighborhood reconnaissance mission and call the electric company. A few moments later, he returned with a full report. The power was off for 3,000 homes in Katy, Texas. Thank you Center Point Energy.

As the younger generation huddled around the smart phones with data plans, I began to think of the outage as an opportunity to listen to AM Radio, so I went to my office and dusted off my old RCA SuperRadio III. 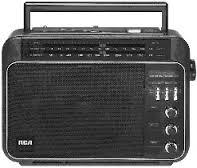 I couldn't remember the last time I replaced the batteries but to my surprise, it came to life with its signature popcorn sound when I pushed its big silver button. "IT'S ALIVE" WOW...the AM band was extraordinarily quiet and responsive.

I scanned across the dial from 610 AM to 1590 AM. All the stations were as clear as a bell. Then, I decided to press my luck. I tuned to KTSA 550 AM in San Antonio and then I moved the dial slightly to the right and heard KLVI 560 AM in Beaumont, Texas. Every station was booming in loud and clear.

I felt like a child with a new toy. I dialed up and down the band, experiencing the clear booming sound of AM Radio without any noise or interference. It was a feast for the senses. It was beautiful.

After a few minutes, one of my daughters walked in and asked about the source of my entertainment. I pointed to my SuperRadio and said joyfully, "listen". She looked at the big black box and asked "How can you listen with the internet and electricity off?" I responded, "It's my portable SuperRadio III." Before I could explain further, she shrugged her shoulders, closed the door and went back upstairs, convinced that her Dad was conducting some sort of high tech experiment.

In a manner of speaking, her assumption was correct. I was listening to AM Radio in a big city without the interference of computers, wireless modems and an overloaded electrical grid. For the first time in my recent memory, the "Senior Radio Band" sounded beautiful. Sadly, my experiment ended with preordained results when the electric power was restored.

Instantly, the noise on the AM band was so bad inside my home that it even interfered with KTRH 740 AM, the legacy 50 kW blowtorch of Houston. Other powerful stations like KGOW 1560 AM and KSEV 700 AM couldn't override the noise so obviously, the lower powered stations didn't have a chance.

My impromptu experiment reaffirmed that noise injection is literally destroying AM Radio, which is the most efficient form of point to multi point communications ever created in the history of the world.

As a class, AM Radio licensees and AM listeners have been severely damaged. The "Good Will Value" of many AM Stations has evaporated.

I think it can be successfully argued in a federal courtroom that AM Station licensees and AM listeners have not received "due process". The FCC, by its failure to regulate interference, has aided and abetted those who are causing the interference. Their inaction has allowed every POS imaginable to take a steaming crap on the sound of AM Radio.

The damage is real and probably totals tens, if not hundreds of billions of dollars. As the CEO of KCAA 1050 AM Radio, it's a source of constant frustration.

The manufacturers, distributors and retailers who market AM noise makers have recklessly caused irreparable harm to AM Radio and it's time for us to fight back as a class and make them pay.