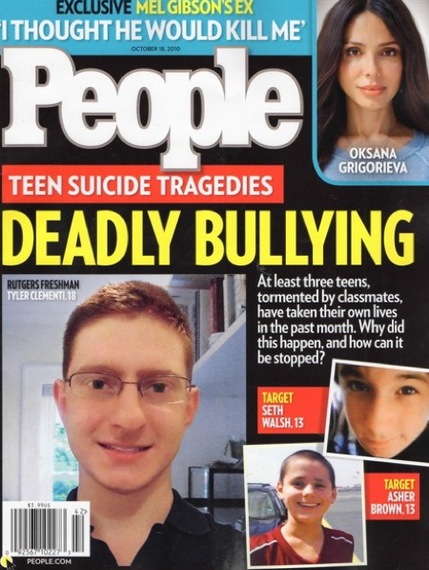 As adults do over Thanksgiving and other prolonged gatherings, my family's conversation over the holiday dipped frequently into and out of politics. While discussing one particular presidential candidate (you can guess who), my mother said "he's a bully. A grown-up bully." So, in other words, she stated the obvious.

Then she asked, "what happened to bullying, anyway? It used to be on the news every day. When did it stop being a concern?"

Good question. For the first ten years of my career, I worked at a not-for-profit organization that worked to encourage television producers, writers and executives to incorporate accurate depictions of health and social issues into their work for the sake of educating the public. We addressed issues ranging from addiction to mental illness, human trafficking and runaway children. Shortly before I took another job, my boss observed that cyber bullying was becoming a serious risk to young people; within a few years' time, the It Gets Better and Trevor Projects became high-profile efforts to stem anti-LGBT abuse among young people, and to prevent the suicide attempts that too often result.

As someone who wondered every single day from seventh through 12th grades whether life was worth living, I was glad to see this happening even if I felt (and still do) feel that "bullying" is an insufficient word when oftentimes what is happening is outright peer-to-peer abuse. Physical and verbal abuses that have the same damning effects as domestic abuse within a household does. Over five years into monthly psychotherapy and almost 20 years after high school, I still carry many deep psychological traumas from being called a "faggot," being pinched, kicked, smacked, punched in the back of the head, having my head slammed into school bus windows and being a one-boy landing zone for food as I ate along at a long span of school cafeteria table... Every. Single. Day. From ninth grade through graduation. It was humiliating, isolating, alienating and it didn't only come from peers: in all that time, only one teacher and exactly zero school administrators intervened on my behalf over all those years. What was I to do? I was required by law to go to school and somehow was a decent student most of the time despite all this, but no one anywhere was willing to help. Had my parents been anything but 100 percent supportive -- thank God, and thank them, they were -- I would have broken. As a teenager, I collected every stray pill I could get my hands on, no matter what it was. I never took any of them because my plan was to take them all at once when I finally (in my then-mindframe) became brave and selfish enough to do it and (now realizing) had finally been pushed too far.

I digress -- but I digress to illustrate why this bullying movement was important. I know that my state of mind is reverberating among countless young people right now as I write this.

Not long after It Gets Better and the Trevor Project had become well known, "bullying" had proven itself a universally successful talking point, with Stefani "Lady Gaga" and her mother Cynthia Germanotta forming the anti-bullying/pro-acceptance Born This Way Foundation in 2011 and the U.S. Department of Education launching StopBullying.gov in 2012.

"Bullying" was such a buzzword by the time Gaga got to it that my immediate irrepressible instinct was to suspect that she was jumping on a popular bandwagon that happened to dovetail with both her fan base and such a popular issue that it garnered the support of the Berkman Center for Internet & Society at Harvard University, the John D. and Catherine T. MacArthur Foundation and the California Endowment.

My cynicism was short-lived, however; I almost could not believe what I was seeing as I watched the launch of the BTW Foundation, as Oprah Winfrey interviewed this remarkable young woman -- a Stefani Germanotta whose unusual articulateness and thoughtfulness I had forgotten had been made evident so many years ago even in her earliest interviews when Lady Gaga was something much weirder and more novel than she is years later. If you haven't watched this video, you must set aside some time to do so. You'll be glad you did.

But with so much popular support of anti-bullying campaigns, whether LGBT-- or technology-oriented, the whole bullying conversation seems to have been co-opted by politics. While thinking about this question, I typed "bullying" into Google. The top headlines relate to a British Tory minister named Grant Shapp resigning over being called a bully and photos of Donald Trump making that potentially political career-ending impersonation of a disabled critic, and his further demands for apologies from those who have called him a bully for doing so.

There are other stories about bullying initiatives, but fewer than were common in mainstream national news before the presidential races began.

I support the It Gets Better campaign to the extent that I want to see it succeed so well that it puts itself out of business or changes its mission entirely -- meaning that I hope it contributes to finding ways to end bullying, not just to deal with its after effects. But that will not happen if the focus on bullying falls away from the national spotlight because it's no longer novel.

Like so many others, today's political antics have my rapt attention, but as much as domestic terrorism at Planned Parenthood and foreign terrorism in the Levant are deadly, so is bullying -- which is really a form of domestic abuse. As a certain someone who has demanded and received the spotlight continues to bully from his bully pulpit, here are just a couple of reminders of why individual peer-to-peer abuse still demands as much attention as ever.