Santa has disappeared from your chocolate Maccabee. This Hanukkah, when you peel the gilded foil from a Maccabee treat, you will no longer reveal a secret Santa.

Last Hanukkah Jennie Rivlin Roberts, then the owner of the on-line Judaica shop, Modern Tribe, decided to sample some of her inventory of chocolate Maccabees with some of her staff. They were shocked to undress a few to find Santa-shaped chocolate. According to a piece in the Forward in 2015, Rivlin Roberts stated:

"The next thing I did was call our supplier ... They said they couldn't afford to purchase a new chocolate mold and chose, instead, to use the chocolate company's Santa mold. His question to me was, 'is this blasphemous or offensive to someone, what's the big deal?'"

This generated a flurry of articles at Heeb, Kveller, and elsewhere. Comments at my Facebook page about this included, "Doesn't look like Judah Maccabee," "Who needs chocolate soldiers?" and, the best, "Foiled again."

I consulted with Dr. Jonathan Sarna, Joseph H. and Belle R. Braun Professor of American Jewish History at Brandeis University, who wrote in an email (12/9/15) to me:

"This is a very old story that seems regularly to be rediscovered. I seem to recall that my friends and I noticed this back in high school. I do not really think it is misleading: We have no idea what Maccabees looked like. Lots of people look different when dressed up and "disrobed" and so it is with chocolate Maccabees. The story is an interesting commentary on consumer culture in the U.S. and shows how a smart company can appeal to multiple religious audiences." 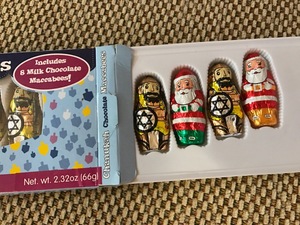 When I contacted Rite Lite, the distributor of the chocolate Maccabee, last year, they argued for the quality of their OU Kosher-certified product. They also wrote an email response (12/7/15) to my questions:

"The chocolate shape, around which we have wrapped a foiled image of a Maccabee, is a generic shape of a medieval man. It can be, and has been, used as a foiled Santa, sorcerer, Maccabee and other applications."

Though we may not be absolutely certain of how the Maccabees dressed, they most probably wore tunics and they certainly lived long before medieval times. (Rite Lite has not responded to my inquiries this year.)

Jewish parents and educators already struggle to counter the pervasiveness of Christmas commercialism in what has long been called the December dilemma. As a congregational rabbi for thirty years, I've observed that December brought counseling for interfaith couples about their different celebrations and numerous meetings about Hanukkah pride. It certainly becomes harder to clarify the teachings of Hanukkah as distinct from Christmas if Maccabees are hidden Santas, especially this year, when the dates of the two holidays coincide. 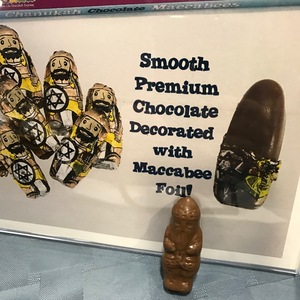 I visited the Rite Lite booth at Kosherfest last month to find that the display, thankfully, highlighted a Santa-less Maccabee. Open your chocolate Maccabee this year and you will find a simple, smooth shape. The Maccabees have been purified and the secret-Santa dilemma averted.

Cross Posted from The Forward.

Prinz lectures about chocolate and religion around the world. Her book, "On the Chocolate Trail," is used in adult study, classroom settings, book clubs and chocolate tastings. She is developing a new project about women and chocolate.