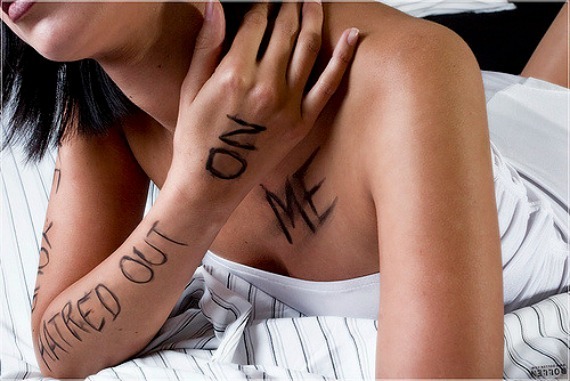 I'd had enough of my own temper tantrums!

Does this sound like you? No judgment. It was me, too ... for two rocky go-rounds at marriage.

Simply because I didn't know.

Lifetime movies and every rom-com I devoured like the last scoop of Chubby Hubby confused the shit outta me, so I would recreate what I thought were perfect conditions, mirroring what I had watched and apparently filing "facts" away in my head from the blasted and blasting TV set.

And nothing. Ever. Worked. Until I paid attention to me and what I was bringing.

In my head, when I raged, I had a laundry list of excuses ready to justify my shitty behavior towards my significant other.

Plagued by childhood insecurities, I reassured myself that I was well justified to rip the rearview mirror off of my Jeep as I contemplated mowing down husband no. 2 -- because my feelings were my feelings, after all, I thought I had ample excuse for any and all levels of unacceptable outburst.

So there I had it. Another relationship burnt to a crisp. *Slow clap.

After my second implosion, an overwhelming cloud of disgust and fear settled inside of me. I decided I needed a timeout before attempting to get serious again.

I worked on myself. I dissected my responses to regular and inflamed arguments and began to hold myself in check. Over the next six years, I was careful not to wade into a deeper love until I had done an emotional self-autopsy and convinced myself I was really a worthy person.

I had to look hard at the mirror and tell myself that no matter how badly I may have been hurt in the past, hurting a new man with my backlashing behavior is simply not healthy for anyone. Yes, I know we all do that occasionally, but it was becoming a way through which I could blind myself to the truth that I, too, am capable of really inflicting damage. And I am. You are, too.

And that's not "normal." (Though I do hate the word normal. I find it as combustible as tossing a match into a pool of gasoline.)

I learned that when I took out past hurts on a new love, that person in turn learned not to trust me to truly hear their feelings, so eventually their feelings for me would just get bottled up and fade away. You've heard of ghosting. Or, sometimes they would strike back and shock with some powerful venom of their own! (Even though I probably had it coming!)

Acting on such false reasoning, I allowed myself to live according to no one's rules but my own, and to take no accountability for the pain I'd caused. If I'd continued to live this way, I would never get to the bottom of my problems -- the metaphorical disease underlying the symptoms -- instead I would ... and did ... construct a continuous circuit of frustration, misunderstanding and invalidation.

Modeling irrational behavior is catchy. Guess what? Soon my partner had developed it, too! No one respected anyone anymore! There were no rules in the new reality and life was full of fighting so vicious you'd think we'd both been on 'roids -- screaming, talking over each other, and hitting really hard into the tender cores of our souls.

The destruction continued on as I learned my own power to hurt, and until I stopped tolerating wafer-thin relationships incapable of supporting growth, too weak to meet the definition of a "foundation."

This was the new, unveiled me. I had been waiting a LIFETIME time to meet her.

Let's say you have your own spouse hell-bent on getting you to stop "being mean," or saying you bring out the worst in them.

Instead of arm-wrestling over who will be the nice one first, take the lead. A relationship isn't a competition and it is not about me, him, or her. It is always about us. Ask the lady with the marriage punch card. It's true. And stop keeping track of infractions.

Are you more capable of gripping onto some sort of self-control than your other-half is?

Are you cognizant of wanting things to change and still in love or (strong like) with your SO?

Then you have a chance to make things better and it starts with you putting your "us" first.

I'm coming out of timeout soon, and it feels amazing to know I've made lasting changes with my fiancé that will serve us for the rest of our lives.

This article originally appeared at Your Tango. Reprinted with permission.