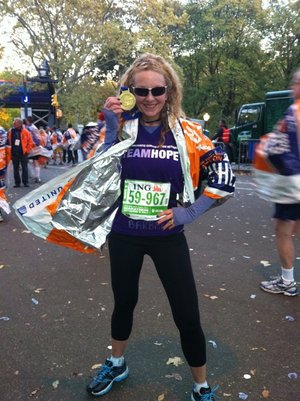 I used to hate running.

Back in my elementary school days the dreaded 'Field Day' came around like clockwork every June. For me, it was one of the worst days of the school year. I pleaded with my mother to let me stay home. The idea of competing in a race to win a medal that was way beyond my reach made my stomach hurt. She always made me go.

Fast forward a few decades to the year before I turned 50.

A husband, two daughters, a busy (often exhausting) career, and 15 extra post-menopausal pounds later, I still hated running. Well, at least that's what I thought. But really, how would I know since I never did it? Truth be told, I wasn't doing much of anything in the way of fitness. Living in NYC, taxis were easy to snag with a simple lift and movement of my hand (very Queen Elizabeth-like), and really, I was always too tired, too busy, too whatever.

But then something magical happened.

The NYC Marathon runs right past our apartment on First Ave. We always know someone who's running in it, attempting a personal best, or just trying to finish, still standing. In any event, the year before I turned 50, my youngest daughter, then nine years old, was holding a sign for a teacher at her school. Maybe caught up in the excitement of the moment, or truly believing that her mom could do just about anything (oh how I long for those days), she blurted out, "I want to hold a sign that says 'Go, Mom, Go!'"

It was a defining moment for me. I said, "OK! I'll do it!" I couldn't believe the words that were tumbling out of my mouth (and with such enthusiasm), nor could anyone else. My husband looked concerned while my neighbors quizzically wondered out loud when I had started running, because they sure had never seen me wearing Nikes or Brooks (only my signature high heels).

I believe in kismet.

The very next day, an interview with Jeff Galloway -- marathoner and Olympian who created the now-famous Run/Walk/Run program back in the 1970s specifically for people who are starting to run for the first time -- was in the Wall St. Journal. (Here's a photo of Jeff and me a few months ago) 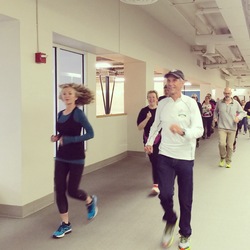 I immediately found a way to contact him so I could learn about his program, and hopefully get talked out of it. Maybe it was his charming southern drawl or his complete enthusiasm for what I was about to do, but he convinced me that yes, I -- someone who was pretty sure she hated running -- could in fact finish the NYC Marathon, still standing, smiling, and wanting to do it again.

I bought Jeff's book and gave myself a year to train.

Sticking closely to the program, I started by walking 30 minutes every other day. A few weeks later I added some slow jogging into the walks, eventually going a bit further and faster. About two months into my new routine I found I was running more than walking.

I didn't know it then, but introducing that single new healthy habit of putting one foot in front of the other -- whatever the weather -- became the cornerstone of a whole new life.

And that's when the magic kicked in.

This healthy new habit sparked a few new ones, all of which helped put me on the right path to feeling good as I inched my way towards 50:

Ate Better: Engaging in regular exercise made me want to fuel my body with better food, resulting in less weight, more energy, and improved overall health.
Slept Soundly: Moving my body every day made me more tired at night, causing me to go to bed earlier, sleep more deeply and longer, all of which benefitted my body and brain.
Got Stronger: Encouraged by how good I felt, I was eager to become even stronger and more powerful. Also worried about my bone health and the threat of osteoporosis after menopause, I started doing push-ups, squats and the Plank every day to keep my bones strong. Bonus: my arms never looked better.
Built Confidence: What can I say? I was proud of what I was doing, happy that I lost those darn 15 post-menopausal pounds, felt energetic, and ready for what was next. Instead of feeling invisible as I approached 50, I felt pretty darn fabulous. It showed in how I walked and talked, and how I sashayed around in my new 7 For All Mankind jeans.

But the most important benefit of embracing all these healthy new habits was knowing that my two daughters were watching me take control of my health and life in a very positive way.

I hadn't forgotten the vow I made to my youngest daughter that day many months before, and took the plunge, signing up to run in the NYC Marathon the month before I turned 50. As luck would have it, I made it into the race -- not an easy feat -- by lottery.

Jeff Galloway's best-selling book on prepping for a marathon is "Marathon: You Can Do It!" and he's right: just about anyone can run in a marathon with enough training, time and commitment. I did run and complete the NYC Marathon that year, and I was very proud to wear the medal and feel those aches in my legs for days afterwards. (Here's a photo of me with a few very cute Brooklyn fire fighters I ran into during the 26.2 mile route, somewhere in Brooklyn.) 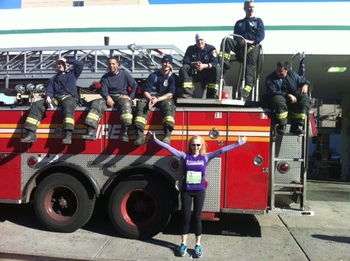 For the rest of my life I can call myself a marathoner (a little marathon trivia: less than 1% of the world's population has completed a marathon). But more importantly, I became a runner (always with walk breaks!), and made health a top priority. Bonus: my daughters thought it was quite cool that I actually did it.

After the marathon, I stuck with my every-other-day program, getting faster each passing year. The weight stayed off, my health check numbers improved, and I got a lot stronger. I loved goading my husband into "who can hold the plank the longest" challenges to show off my new power. Guess who always won?

I was feeling so good, in fact, that to celebrate my 55th birthday--five years after running in my first marathon--I did it again! Except this time, I finished over an hour faster than the first time.

Life was good. Everyone in my little world was thriving, including me. My first book was doing well, and helped establish me in a whole new career of writing and speaking about positive aging.

But two years later, as I was inching towards 57, life changed in measurable ways. My mother was diagnosed with Alzheimer's, Parkinson's and Type II diabetes, requiring live-in help and frequent visits to her home in Virginia. My mother-in-law developed cancer and after almost a year of tremendous suffering and treatments, passed on. Simultaneously, I started work on my next book, guided one daughter through the transition from high school to college, helped my youngest daughter navigate high school and college apps, and basically tried to hold everything together, as so many women in the "sandwich generation" do.

Shortly after my mother-in-law passed on, my brother-in-law was diagnosed with colon cancer and slid down that slippery slope of chemo, surgery, radiation, experimental drugs, and high hopes that were always dashed, only to lose the battle earlier this year.

Running, even walking, became an indulgence, and was quickly put to the side. "Oh, I'll get back to it soon enough," I told myself. But I didn't. Instead of turning to running and my other little healthy habits -- like eating well and sleeping -- for strength and stamina, I fell back into my old habit of saying "no time, can't do, not now."

It took its toll. Just months after slowing down and eventually stopping my running routine, here's what happened:

Intellectually, I knew that if I wanted to be strong and fit to be there for everyone in my life and to fulfill my own purpose, I needed to get back on track, ASAP. I also recognized that this was life, and things can happen that are out of our control. Life, and everything it throws at you, should not be an excuse to stop caring about yourself, but that's the road I had put myself on. While I still publicly nagged people to take care of their bodies, I started to gently nag myself, too. It worked.

Six months ago, I started walking for 30 minutes several times a week, treating myself to new running shoes and a cool new running outfit to give me the extra push. Within a week, walking turned into running (with walk breaks), push-ups were part of my daily schedule, sleep came more easily, and life just seemed . . . better. I was even running faster than I had ever run before. 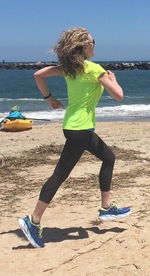 It took a few months but life returned to normal: weight came off, muscle strength and endurance came back, health check numbers improved (my doctor was duly impressed), and my favorite jeans looked good once again.

The next step was to put this renewed sense of self-care to good use.

I signed up to run in this year's NYC Marathon (my third) to celebrate my upcoming 60th birthday in December, my return to living a healthy life, and, most importantly, to raise money for colon cancer research in memory of both my brother-in-law and grandfather by running as a member of Memorial Sloan Kettering's 'Fred's Team'. In just a few short weeks, I'll run on behalf of millions of others who have succumbed to cancer. Because I can. 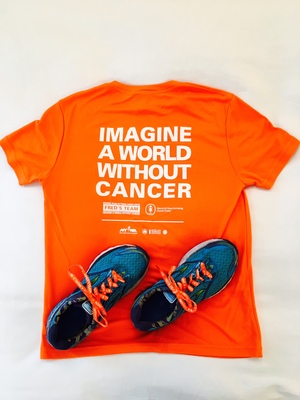 Exactly 10 years after I started my love affair with running, and after a brief separation (divorce was never on the table), I've renewed my vow to live a life guided by healthy habits that will give me the strength, stamina, endurance, and joy to engage with the world for the long haul.

Looking for ways to get your life back on track? Do what I did: put one foot in front of the other, keep going . . . and never look back.

Barbara Hannah Grufferman is a positive living advocate, writer, speaker and YouTube Host. Her next book, "Stay Younger Longer: 100+ Healthy Habits to Look Great, Get Strong, Stress Less, Laugh More & Own Your Life--Starting Now", will be co-published by AARP and National Geographic in 2017.

Health Post50 Fifty Life After 50 How We Live: Wellness Health Benefits Of Sleep