Jimmy Carter, Bono and Nile Rodgers made for a surprising trio of revelers at New York's Hammerstein Ballroom last Friday night. On the red carpet before Rodgers's April 29 charity fundraiser, the three men mugged for the cameras as if they were BFFs. (Later in the evening, U2 frontman Bono danced on a table inside the restored 110-year-old theatre.)

The celeb-filled event wasn't as wild as the Studio 54 parties about which Rodgers, 63, and his band Chic sang on their 1978 disco song, "Le Freak." Yet, the Grammy-winning music producer is proud that this year's gala to benefit the We Are Family Foundation brought Bono and Carter together for the first time.

The shindig honored the busy 55-year-old Irish rock star and the still-globetrotting 91-year-old former POTUS for their humanitarian work to promote peace and fight diseases such as HIV/AIDS, Malaria and Guinea Worm (Bono through his organizations ONE and (RED), and Carter via The Carter Center).

Rodgers counts Bono as a longtime friend but was also excited to laud Carter, whose dozens of books and speeches he's always admired for their "intellectualism and brilliance."

Jeni Stepanek, courageous mother of late author and Carter collaborator (Just Peace), Mattie J. T. Stepanek, presented a peacemaker award to the former President in honor of her son. In an interview prior to the gala, We Are Family Foundation's Nancy Hunt said that the younger Stepanek's bold spirit was a primary influence on the organization's signature programs, Three Dot Dash and TEDX Teen, which promote entrepreneurship and leadership skills.

Before Stepanek summoned Carter to the stage to accept the award, an inspiring yet heartbreaking video of her poet child, stricken by the muscular dystrophy that killed him in 2004 at age 13, played. In his acceptance speech, Carter called Mattie Stepanek "the most remarkable human being I have ever known." 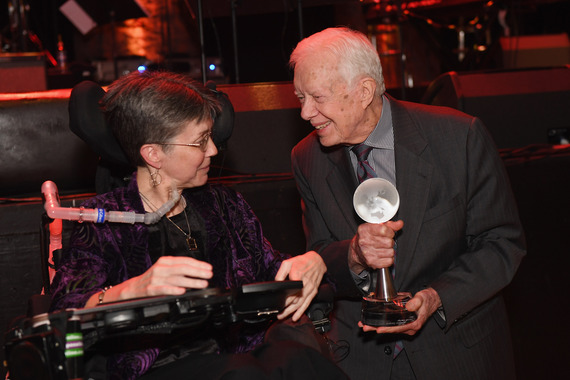 A guitar played by Rodgers at the Grammy awards, signed in person by Bono and offered during the $1500 per-plate dinner auction sold for more than $100,000, putting the evening's intake over the $1 million mark.

When Bono made it to the podium to receive his award, he gave his statue away to the woman who'd introduced him: 22-year-old Malawian Ellen Chilemba, founder of the Tiwale Project, a job-skills training nonprofit she founded when she was 17. This was a fitting gesture, considering Bono's personal and professional investments in Africa's economic future and a recent gender equality campaign spearheaded by ONE. He thanked Rodgers and quickly turned his awe toward Carter. "President Carter. What was that? What was that? A visitation," Bono said before praising Carter for his dedication to the Christian faith and for his ability to quote both bible verses and Bob Dylan lyrics. He compared Carter and Martin Luther King, Jr - Atlanta's two Nobel Peace Prize winners - before pumping a fist in the air and joining Chic for a rendition of U2's "Pride."

Bono sang "I Still Haven't Found What I'm Looking For" and "Beautiful Day" while the audience made their way to a dance floor, where youth ambassadors from around the world bounced and swayed. During "Mysterious Ways," the singer pranced through the crowd and leapt onto a table - still covered by a table cloth and wine glasses - to sing the tune's final chorus before exiting the venue. The groove continued onstage as Chic created a love fest spanning five decades. Along with the teens, older patrons bobbed their heads to "I Want Your Love," Daft Punk's "Get Lucky," Bowie's "Let's Dance" and "Good Times."

The finale came in the form of the song for which Rodgers's organization is named. He co-wrote the anthem "We Are Family' for Sister Sledge in the 1970s, and its lyric has since morphed into a concept that represents music's - and musicians' - ability to bring people together around causes and community.

"I sang that song when I was a goofy kid with braces," one of the hit's original vocalists, Kathy Sledge, said before the show. "I had no idea of the impact it would make on future generations." 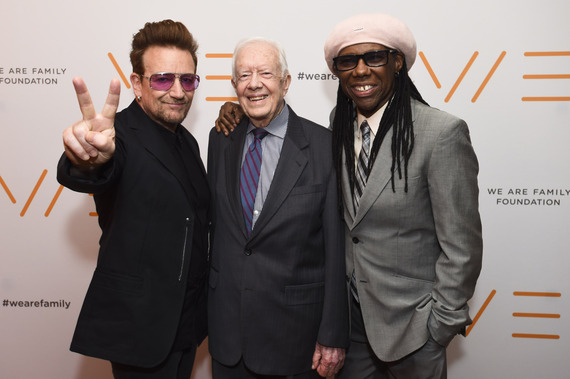