I hardly notice anymore that Elliot has no hair.

I do notice people's reactions when they see him, if we're at a restaurant or a store and his hat falls off, or he takes it off, since he doesn't really care. Sometimes, there's a double take. I'm not always sure what people think. I guess, looking at him, you would know right away that he's a cancer kid. Although you see a lot of kids with crew cuts and even shaved heads these days, he has those few little wisps of fur-like hairs that are the tell-tale signs of chemo treatment.

Every now and then the subject comes up when he's around, but it doesn't seem to bother him much. His first reaction to losing his hair was how funny it was that he looks like his dad now. Not sure Martin was ever so proud as that moment when Elliot saw his reflection and said in surprise, "Hey, I have almost no hair! I look like papa!", then laughed and walked away. He has been relatively unaffected by the change in his looks. We're careful, however, when the subject is mentioned and he's around, to always say something positive about it. He's only 5 years old, and not yet very aware of the importance people place on appearance, but he is at that age where he is starting to understand the meaning of "fitting in."

Recently, a friend was visiting and mentioned that it looked like Elliot's hair was growing back already. (A temporary event since he's still in chemo. Sometimes it does seem to be sprouting up again like tiny weeds, then a week later he's so bald his head shines.) Both Martin and I chimed in with our automatic remarks, something like, "Yep, it'll grow back at some point, but in the meantime, he's so handsome with those big blue eyes." Sometimes we talk about how nice a head shape he has, or how great his ears look. And it's all true, too. We actually find him to be quite a good-looking kid. So we're not lying or exaggerating his eye-beauty, etc. -- it's just a clever rebuttal, a re-direct. 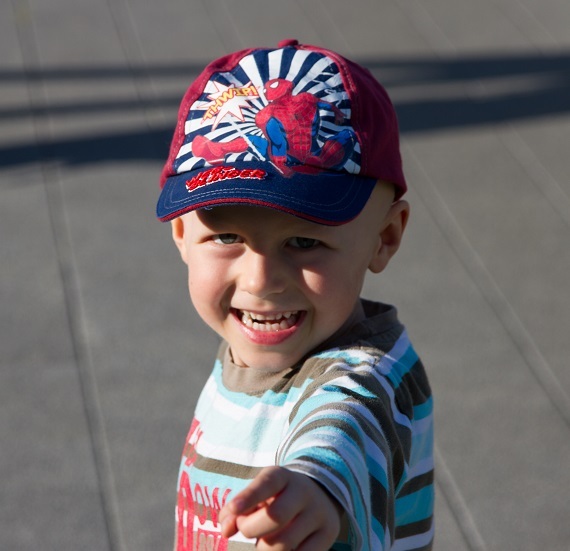 I actually don't think the baldness issue is just about looks, really. Even in the non-cancer world I think any negative view of chemo-baldness is really an instinctive judgement about health, not beauty. People associate this type of baldness with being sick. And, to be fair, it is often a pretty accurate instinct. But the fact is, there are some times, despite those rotten cells causing trouble, when a kid with cancer does not feel sick, and wants to get outside.

And so since sometimes my cancer-boy feels energetic enough, we are occasionally out in public. Often I won't take Elliot anywhere there might be a lot of people, if his blood count is low, because he has no immunity to any virus going around. But other times, we do go to restaurants and stores, even the occasional playground if we're feeling particularly invincible. And recently, that's when I started to notice them. Well, the lack of them, actually. The others. The other baldies, like my son. I know the statistics: childhood cancer is quite rare, so bumping into another baldie while at the playground is probably unlikely. But adult cancer is really so common, comparatively... So where are they all?

Before I hurt anyone's feelings, I will get off my high horse and say right away, as I have told many people, that if what had happened to Elliot had happened to me I would be tempted to go into my room and hide under my blanket and come out two years later. On the other hand, if I could trade places with him and have this stupid cancer be in my kidney instead, I would do it in a heartbeat. But that's not possible.

So we head out "into the world" today and I wonder where everyone is. I would love to bump into a bald person. Seriously. I mean, obviously, I am into balding men anyway, but would I ever like to see a woman or man wearing a scarf or hat like Elliot. Or just nothing. A nude head, parading around proudly in public for all to see. Wow, would that ever make me happy.

But generally, we never do see other cancer fighters out there. Until yesterday. Lo and behold! I spot one.

We are at the mall. It's raining out, and we got bored at home. (Just how many Legos does it take to build the Eiffel Tower, I will never know.)

A woman comes over and sits next to me on a bench near the kids' playing area where Elliot is running around. She is wearing a long silk scarf beautifully wrapped around her head. She does look pale, and maybe a bit thin, but actually pretty good. I don't say anything, but am silently excited. How can I convey to her that I am also from "that world"? Damn my hair.

Elliot runs over to ask if we can get an ice cream. He is wearing the blue sunhat with the octopus on the front. (By the way, the octopus must absolutely be placed at exactly the correct frontal position or a tearful crisis will ensue. Cancer reaction or normal 5-year-old? Anyone?)

With his hat it's hard to tell he is bald. He stares blatantly at the woman. Then he turns to me and says, and I am sure he speaks at least 10 decibels above his normal voice volume, "Hey, she's bald." I start to feel a bit hot. The woman clears her throat. She looks at him and smiles quietly. He takes that as an opening for him to increase the volume by another 20 decibels or so and ask her, "How come YOU have no hair?"

Now, I know why he's asking. He wants to chat with her about baldness the way he would otherwise chat with a friend about Legos. Baldness is familiar to him. If she had a visible scar, he would probably happily lift up his shirt to show the one that stretches across his abdomen.

But the woman doesn't know that; she just thinks he's another innocent 5-year-old asking an innocent question, and in a show of remarkable patience and probably practice she calmly says, "Well, I have to take medicine that makes my hair fall out. But it will grow back after a while." Then she slowly gets up to go while Elliot stares at her with his "Duh... I knew THAT" look.

And just as she starts to walk away he calls after her, "Well it's good that you have nice eyes!"

And she turns and stares at him a bit, and I love him.