I have never felt so Black at work...

A few years have passed since I've been at that company, but I have never forgotten that feeling; the feeling of being utterly distraught, yet so completely alone in my sadness.

Last night, I couldn't sleep. I stayed up writing a piece about the first time a White person at work actually acknowledged our long-standing American tragedy of racism, bigotry, and injustice. That first time was this week.

I am a Black woman.

Not only that, I am a Black woman working in tech, one of the most homogeneous industries ever birthed.

As a woman in tech, I account for 30 percent of the tech workforce.

As a Black person in tech, I account for 5 percent of the tech workforce.

But as a Black woman in tech, I account for only 2 percent of the tech workforce.

I currently work at a venture capital firm that invests in tech startups. Our VC firm is arguably the most diverse in the country with 5 Blacks, 2 Latinx, 2 Whites and 4 women. Just to put that in perspective, venture capital firms are 97 percent White and Asian and 89 percent men, so yeah, we're really really diverse in comparison.

When I went into work yesterday, the first thing my boss, who is a White woman, mentioned to me was the anger and pain she was feeling about the fatal shootings of two more Black men by White police officers.

She talked about the articles she read and the videos she watched and how she wanted to say something about it to the crowd of Silicon Valley founders and investors we'd be gathering for an event later that evening. She took the time to ask me how I was doing and if I wanted to talk or take some time off. She was in all ways very supportive and proactively so.

I don't think I realized it at the time. It wasn't until I actually sat down to write this piece, in fact, that the significance of that short interaction really sunk in for me.

Better yet, my boss.

Initiated a conversation with me about racial injustice in America.

She expressed disgust and outrage.

She asked if I was OK.

She offered to speak out.

She planned to take action.

How many of my Black brothers and sisters -- especially in tech -- can say that their White colleagues acknowledge the current state of racial injustice in America?

Seriously, I want to know. In fact, leave a comment on this post, so we can all know. I haven't been in tech that long -- five years now -- but I'll tell you one thing for sure:

Tech does not talk about Black people being killed by police. 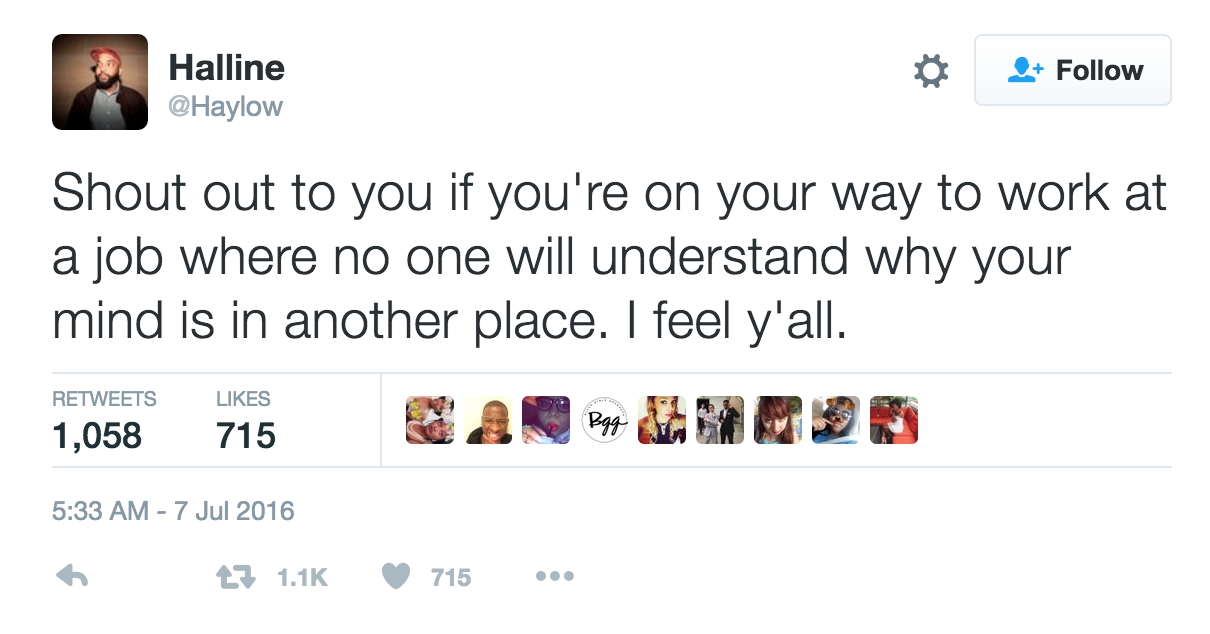 And why? Well because...

Tech does not work with Black people. 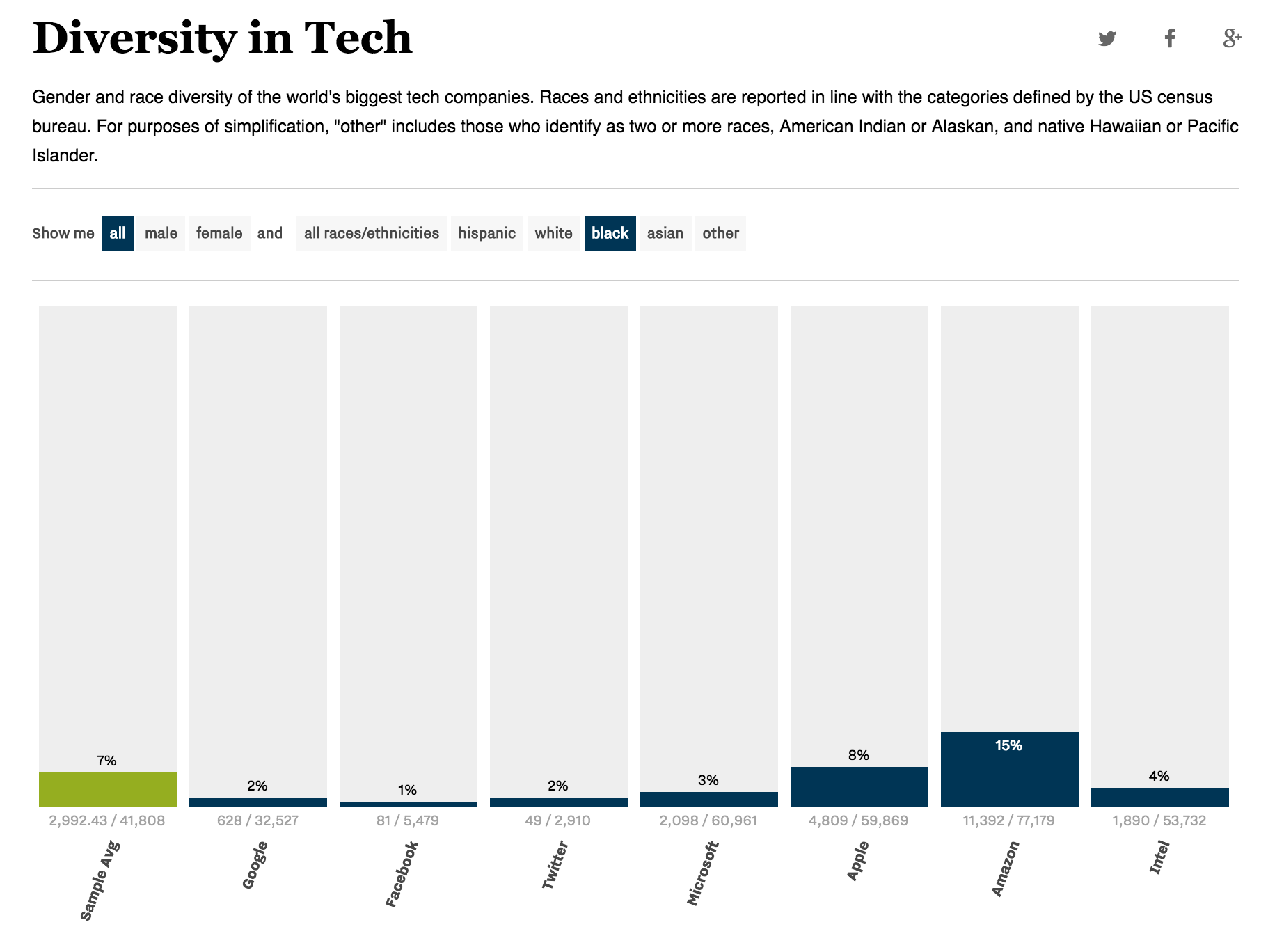 Tech does not socialize with Black people. 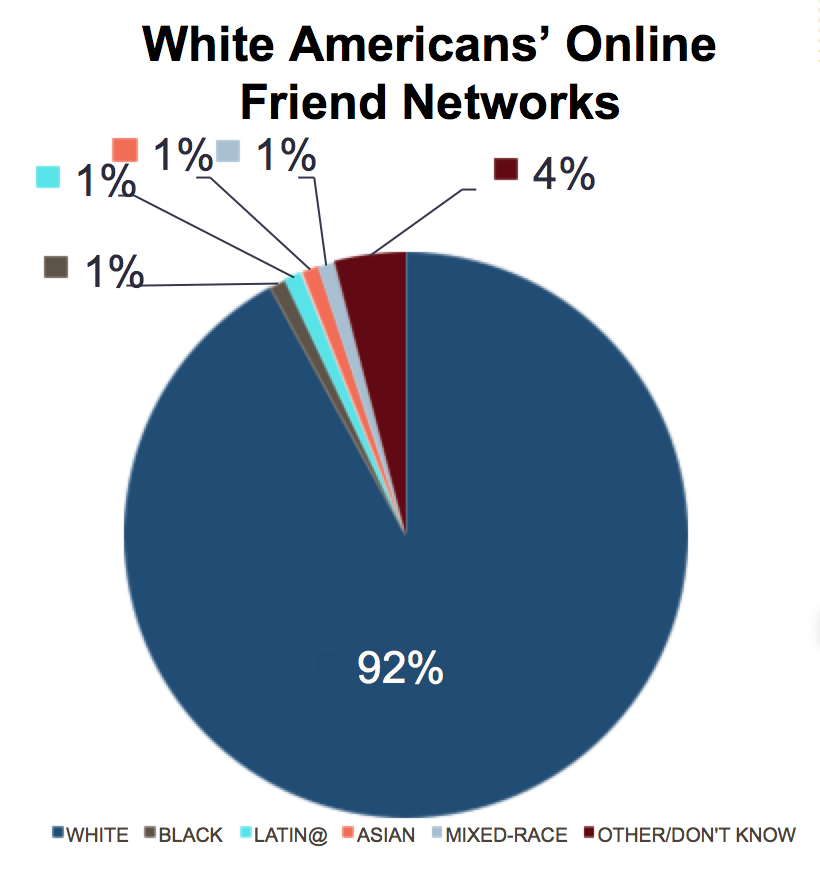 And because tech does not interact with Black people at work or at home...

Tech is less likely to empathize with Black people.

So yesterday, when my boss -- a White woman in tech -- empathized with me, a Black woman, that was A.VERY.BIG.DEAL. In fact, it was the first time a White colleague (and I've had many) has ever said anything to me about the killing of a Black person in America by a White police officer -- and there's unfortunately been several opportunities for them to speak up.

The fact that a White colleague in a work setting made it a point to make a point about racial injustice in America and acknowledge the Black community's pain, hurt, and anger over it... the fact that she didn't just act like today was "business as usual" -- that meant more to me than any free lunches, office perks, or holiday bonuses ever could.

She saw me, she saw my people, she acknowledged our pain, and she offered to help.

Today you have a chance to be a better colleague.

Don't wait for a/the Black person at your company to say something. Don't wait for your HR or ERG rep to send you an email. Take it upon yourself to get educated about the Do's and Don'ts of being a good ally. 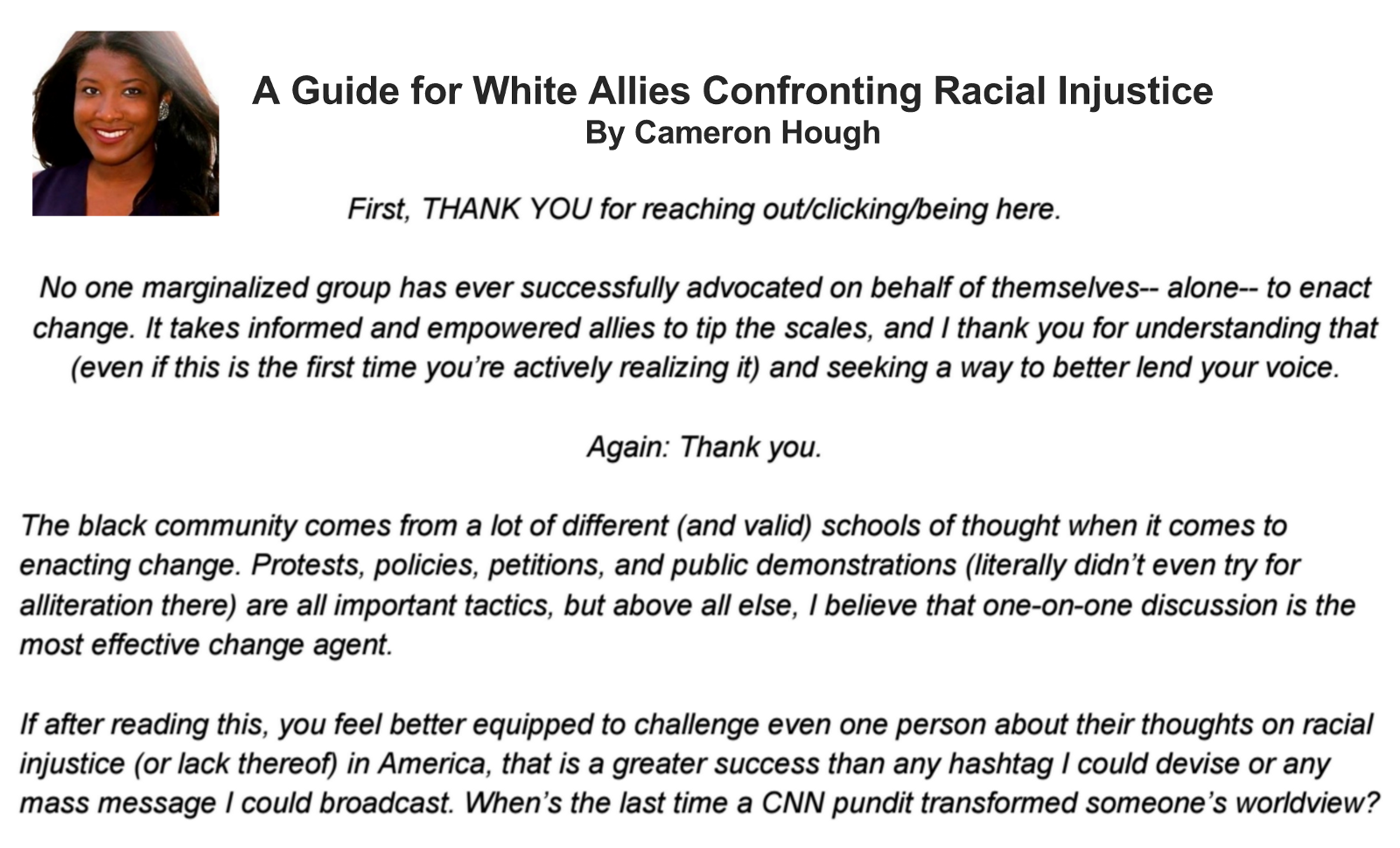 You don't have to have all the right words or all the perfect answers, but just saying something to the Black and White people you work with -- acknowledging that this atrocity happened and that you're hurt by it -- that really is a start to making a difference. Speak about the humanity of those innocent Black men, speak about the mourning of the Black community and our entire country. Just whatever you do, speak from the heart. 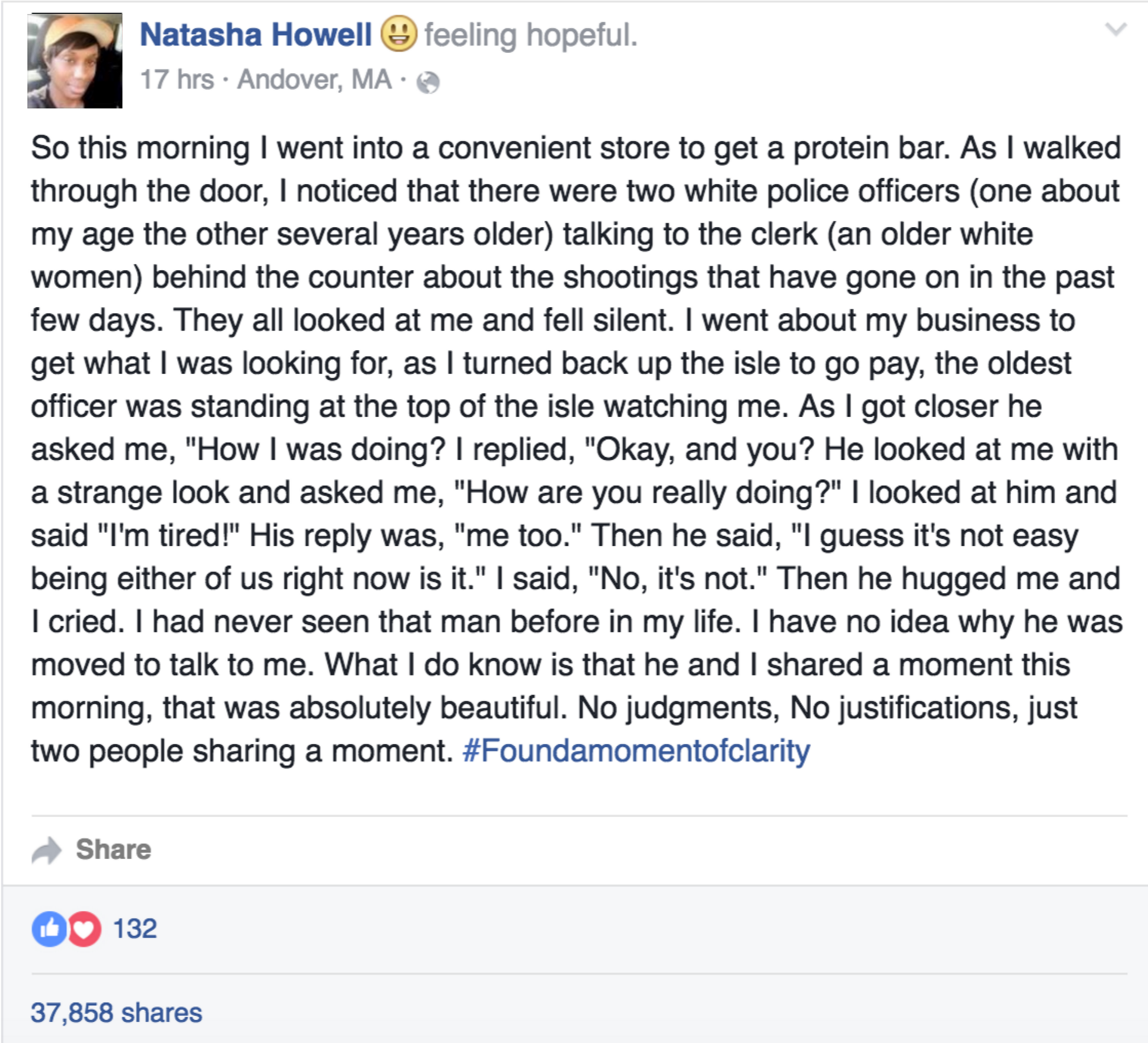 What's happening to Black people under police patrol is a national tragedy, and it is having a traumatizing effect on many people. Don't expect your Black colleagues to be able to jump right back into work as if nothing's happened -- especially if they're in a workplace that doesn't even acknowledge these horrific events are taking place. 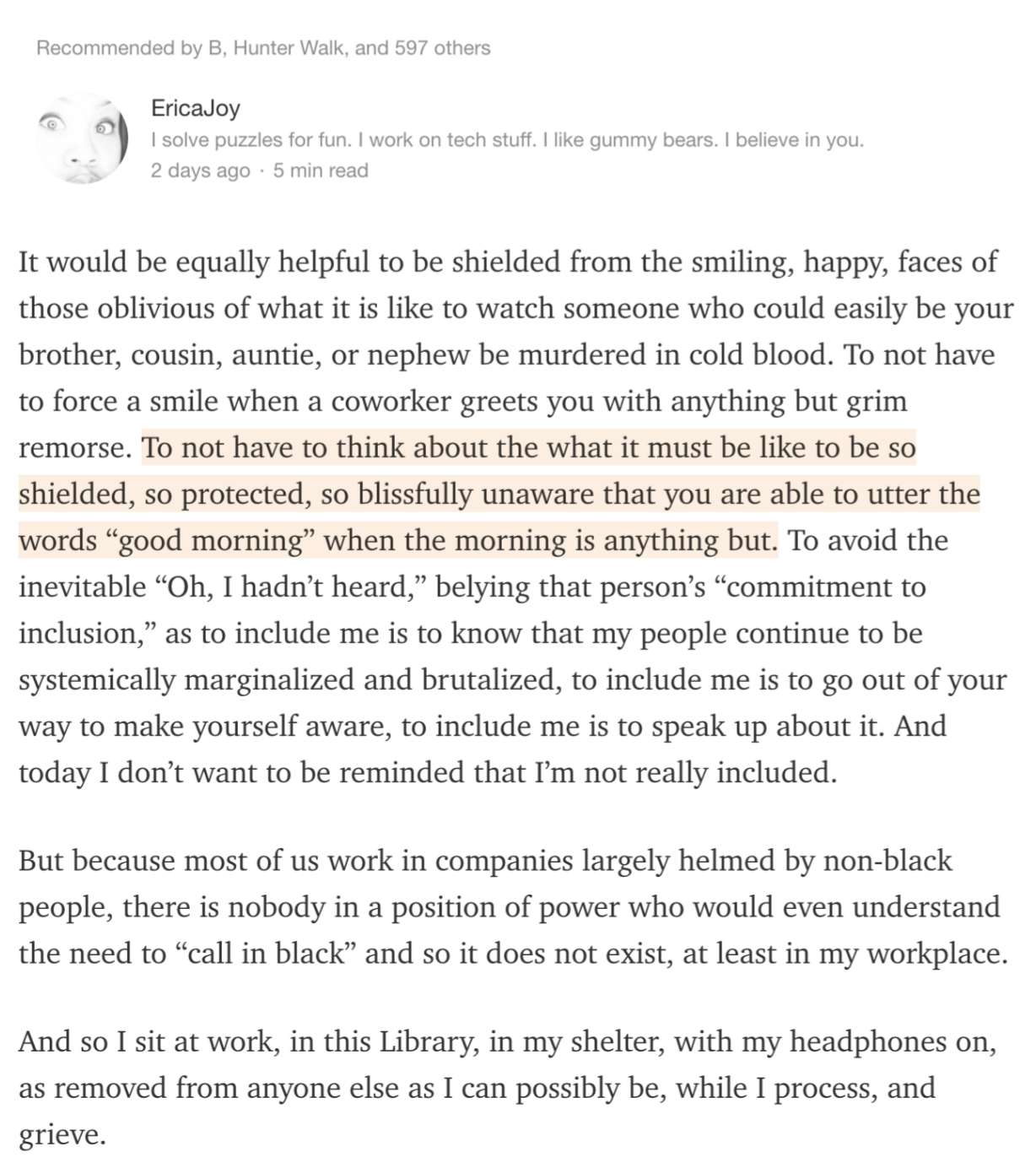 Tech is smart -- like really freakin' smart. Tech wouldn't be taking over the world if it wasn't so damn smart. So I don't buy the "I don't know what to do" spiel. You have a growth mindset when it comes to everything else. Why do your critical thinking skills suddenly vanish when it comes to figuring out how you can contribute to this whole racial equality thing? Whether it be investing in a more diverse workforce, lobbying for judicial system reform, refusing to do business with cities and individuals that perpetrate racism... there are countless things you can take action on.

I wholeheartedly believe that if you put your minds, hearts, and resource$ together, you can devise solutions in collaboration with the grassroots movements already on the ground and help write a new, more promising chapter of race relations in America. 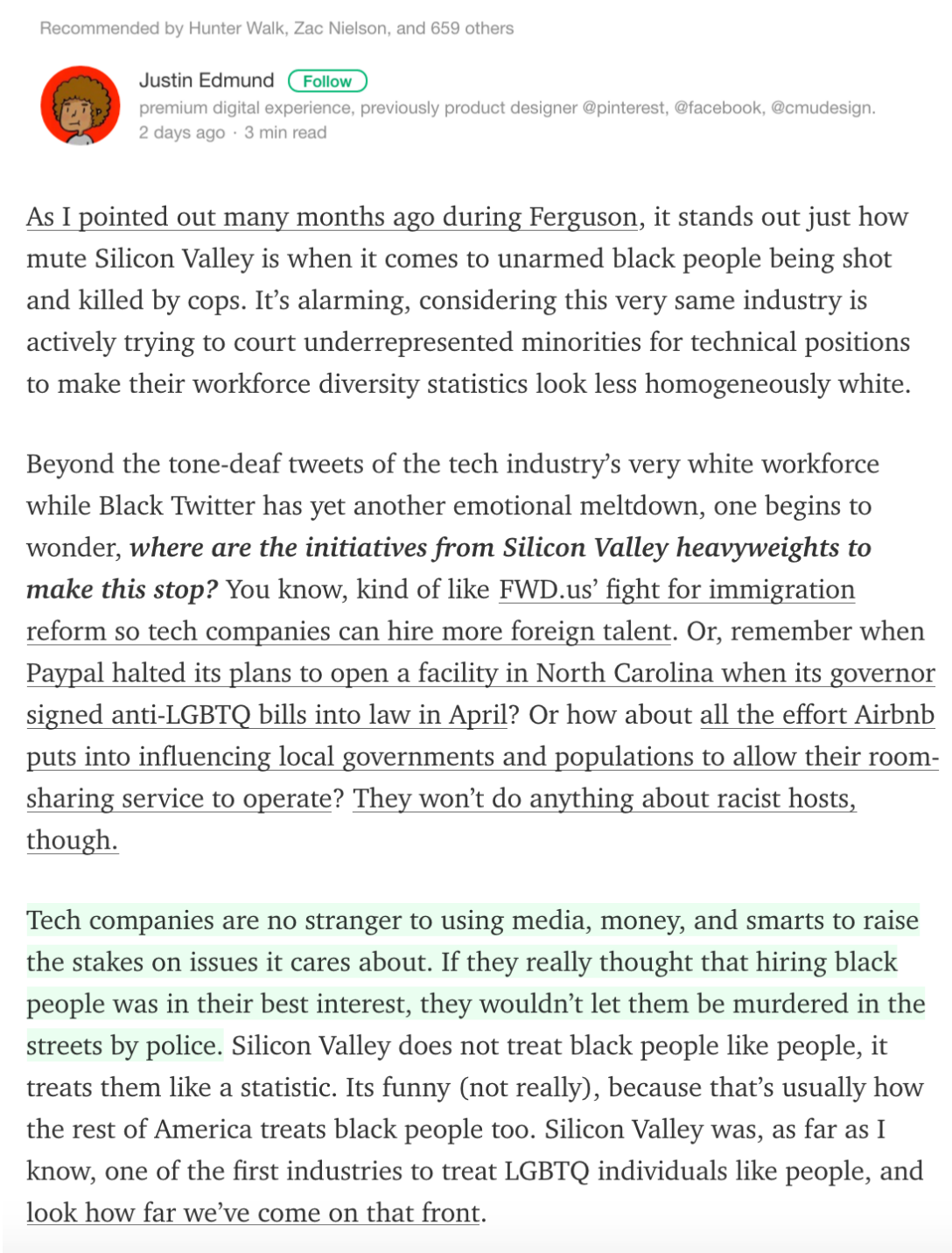 5. *Keep* looking in the mirror

We must never stop looking in the mirror, for it's the only way we can truly ensure we bring about the change we wish to see.