One can hardly talk about Las Vegas without including the word "breasts" to describe some of the razzle-dazzle scantily-clad entertainment. Bombarded with busts and breasts before I entered Caesar's Palace, I marveled at such a perfect setting for the National Consortium of Breast Centers (NBCB) annual conference. This was my first NCBC conference, and my purpose was to bring attention to MY breasts -- specifically one of them -- my extremely dense left breast. My other breast used to be described by radiologists as extremely dense. It has since been exchanged for a back muscle, radiated 24 times with four additional surgeries because of a hidden quarter-size intruder that invaded my 13 lymph nodes. This alarming advanced-stage breast cancer diagnosis came within weeks of my "normal" mammography report.

At the age of 35, I had a baseline mammogram and beginning at age 40 had yearly mammographic screenings. I was never informed that my specific type of breast tissue could cause be great harm. At the time of my tragic diagnosis, a decade of scientific research was accumulating about the masking risk of dense breast tissue by mammography. Like the nearly 90 percent of women who are diagnosed with breast cancer, I had no family history of breast cancer. From the myriad of breast screening marketing campaigns, the mammography mantra, like the Girl Scout pledge, was instilled in me. In addition to keeping fit, eating healthy and examining my breasts, my mammography screening would give me access to an EARLY diagnosis, protecting me from later stage disease and potentially a premature death. So, like clockwork, I scheduled my yearly mammogram and each year my results were reported as NORMAL. Dear Ms. Cappello, We are PLEASED to report that the results of your mammogram are normal. I was reassured for 11 years that all was well. It took an advanced stage cancer diagnosis and my compulsion to scour the medical literature before I discovered the truth about my Dense Breast Tissue -- the strongest predictor of the failure of the mammogram to find cancer. It was one of the best-kept and potentially deadly secrets to the 40 percent of women who had it.

Ten years after my diagnosis, the health issue of dense breast tissue has been partially exposed predominately because of the mission of Are You Dense Inc. and Are You Dense Advocacy Inc., which has fueled the grassroots movement of patients turned advocates for the standardization of density reporting. Tragically, there is no mandate to report density to the patient. Hence, most women will not be informed of its impact on their breast health, unless they are lucky enough to live in a state with a density reporting law or tragically AFTER their later-stage cancer diagnosis. That's breast backwards.

At the NCBC in Las Vegas, conference sessions included topics on Imaging the Dense Breasts and The Dense Breast Laws. Manufacturers, recognizing the challenges of imaging the dense breasts by mammography and the heightened interest of the breast community and general public since the first density reporting law in Connecticut in 2009, discussed their solutions to this dense breast dilemma with breast imaging professionals. Handheld and automated ultrasound, molecular breast imaging, 3D and contrast-enhanced mammography and software products to standardized density reporting were among the products highlighted at the conference.

It has been six years since Dr. Christiane Kuhl commented about the results of the ACRIN 6666 trial results, "If women were told that screening mammography detects only half of the cancers, they may perceive that fact as the real threat they want to be protected against, not false-positive diagnosis."

We must remove the barrier to an early diagnosis by broadening the conversation of dense breast tissue from the medical professionals and manufacturers to a woman's mammography reporting results. The failure to notify the patient of her density so she can initiate a discussion with her health care provider is unconscionable.

What happens in Vegas must be exposed as the odds of having dense breasts and missed, delayed and later-stage cancer are too great to be kept a secret.

View a short video as I expose the secret of dense breast tissue among the many busts and breasts at Caesar's Palace.

Patient Advocate, Bonnie Rush (L), President of Breast Imaging Specialists with me and another breast goddess at Caesar's Palace. 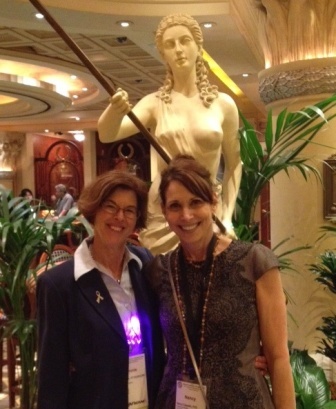