Until this year, the words "meditation" and "retreat" did not go together in my world, in any capacity. Truthfully, the word "retreat" never entered my vocabulary much at all, unless it somehow involved a spa treatment. But suddenly, in 2012, it seemed as if people were retreating. People were becoming retreat-ers.

It was time for me to join the fray.

Especially because the retreat I'd decided to sign up for was being led by Thom Knoles, the man who'd taught me meditation nearly a decade ago. The form of meditation he teaches, Vedic meditation, is a derivative of the Transcendental Meditation technique taught by Maharishi Mahesh Yogi, and I've been practicing it for roughly 20 minutes every morning and 20 minutes every afternoon most days since I learned.

Still, meditation, for me, has always been a solitary act: Something I do, in a cool, quiet room -- preferably my bedroom -- with the windows closed. During Thom's visits to Los Angeles over the years, I've occasionally joined in the group meditations he's led, where I've encountered hordes of people who have told me how much they love meditating in a group setting. I've nodded and then contemplated murder as I tried meditating next to them but found myself horribly distracted by their coughing or rustling around or loud breathing.

There were benefits of meditation that these coughers and breathers spoke of that I felt I wasn't necessarily getting. They talked about things like "feeling at one with the world" and "entering new states of consciousness" and "developing a magnanimous feeling" toward their fellow man. I got the feeling that if I breathed too heavily next to them while meditating -- and for all I knew, I did -- they found it not irritating but actually somehow beautiful.

It was time to take my practice deeper. It was time to acknowledge, first, that what I had was a practice. I realized that the role I'd given meditation in my life was that of "efficiency generator": I always felt energized after one of my 20-minute sessions, especially after the afternoon one, because it usually provided me with enough energy to write for another few hours. But I wanted more.

The retreat I signed up for was in the Catskills town of Phoenicia, at Menla Mountain Retreat, a 320-acre property operated by the U.S. Tibet House. After spending a few days in Manhattan, I took a Trailways bus out to Phoenicia, passing Woodstock and enough Catskills towns to feel like I'd somehow accidentally landed in "Dirty Dancing."

Once I arrived at Menla, I met the other members of the group: Primarily 30- and 40- something creative professionals, along with a smattering of 50-somethings and two 20-something brothers whose father had recently gone on one of Thom's retreats. Many of us were experienced meditators -- some had even been on other retreats with Thom before -- but there were newcomers as well.

We were there to learn what's known as "rounding." When I'd first heard this word, I'd pictured each of us bent over in half, arms hanging to the side, moving around in circles -- some sort of a leftover image I must have had in my head from watching a group of deadheads at a show I'd been dragged to in high school. But rounding was actually, I soon learned, a series of asanas (or yoga poses) and Pranayam (or breathing techniques) that we were instructed to do before beginning one of our 20-minute meditations.

The poses were quite basic -- what Power Yoga enthusiasts in L.A. or New York would surely sniff at -- and apparently it was their very basic-ness that was so important. We were told not to make any serious effort at them: If we bent over and, say, our arms didn't touch the ground, we weren't supposed to stretch until we reached the floor, the way we're encouraged to do in most fitness classes, but to dangle where we were. The Pranayam consisted of plugging one nostril and breathing in, then switching to plug the other nostril and breathing out -- for five minutes. Doing all of that -- the asanas followed by the Pranayam followed by one of our regular 20-minute meditation sessions -- was doing a round. And what were we supposed to do after completing a round? Why, more rounding!

While this sounds like all it would be tedious, for some reason I found it anything but. Of course, what I had motivating me was the promise that, after rounding retreats, stress that's accumulated for years literally drops away. 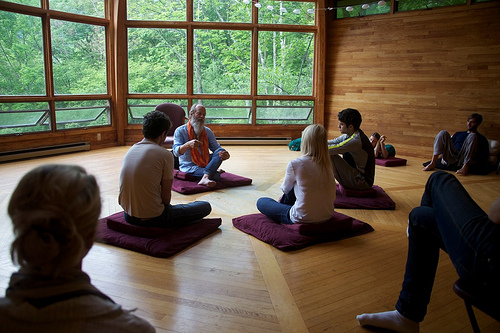 Many retreaters stayed in the main lecture hall and did their rounds together--each taking their own spot, marked by a yoga mat, against the wall--others went off to round in their rooms or even outside. I started in the main room but, despite the stress falling away from me, I was still me--which means that when one of my fellow retreaters rounded off his round by falling asleep and snoring, I found myself wanting to roll up my yoga mat and toss it in his direction. Off to my room I went.

Rounding was broken up by meals--all terribly healthy, except for one lunch that inexplicably included chocolate chip cookies--and lectures by Thom, about everything from the long-term benefits of meditating ("Over time, it makes you sort of mentally deficient at getting stressed--in the same way that if you dip a cloth into dye, eventually the color will start to stick") to understanding our relationship to joy ("Object Referral Happiness means that the object world has arranged itself into a set of circumstances that fit our idea of happiness whereas Self-Referral Happiness comes from stepping beyond thought into the field of being, where we can say, 'If my whole world is taken away, that's okay because I'll just create a whole new world'"). During the first few lectures, I noticed a lot of people placing their phones on the stage next to Thom. I was so relaxed that my brain apparently wasn't working clearly and I assumed they were doing that because they didn't trust themselves not to be distracted by Twitter or Words with Friends or Facebook while he was talking. It was only during the last lecture that I realized they were all recording his words.

To my delight--and, I must admit, surprise--my fellow snorers and breathers and coughers became my fast friends. I guess it shouldn't have been so shocking: people who are gathered together for a short period of time while seeking a common goal have been known to bond, but I think when your shared intent is greater joy and less stress, that bond is less of the summer camp variety and more of the lasting relationship type (and, indeed, we've all been in regular touch: right now, I have get togethers planned with both the L.A. and New York contingents).

The stress relief that would come from two straight days of rounding would, Thom promised, be noticeable: the retreat ended on a Monday morning and he swore that by Wednesday, we'd feel, undeniably, a previously not experienced level of joy. And call it the power of suggestion or just call it a process that works but by that Wednesday, I was back in LA and I was, indeed, delighting in my life. The feeling lasted--well, a few days at least. But a few days of pure delight for someone who finds herself regularly wanting to smack a fellow meditator who's coughing may be some sort of a record. If I want to get it back--well, that's what another retreat is for.