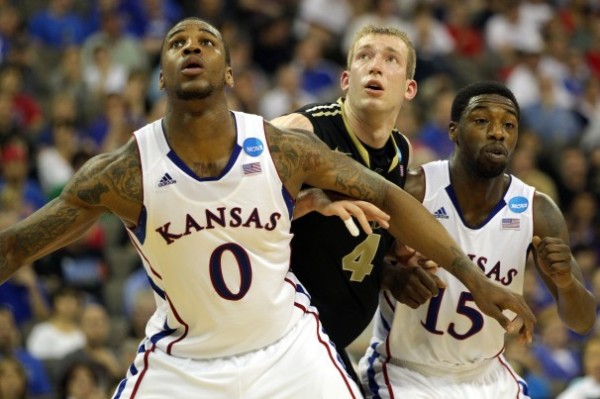 In 2011, 17,500 college basketball players were registered with the National Collegiate Athletic Association. That year, 48 college players were drafted by NBA teams.

What happens to the undrafted? Some bounce around the international leagues for a few years, and a few even make it to the NBA. Many more go on to office jobs. But far too many college basketball players, especially players of color, leave college without an NBA contract and without another crucial ingredient for success: a college degree. As we watch tonight's NBA draft, we should consider the fate of those many undrafted.

In the student-athlete equation, being a student must come first. In order to make that happen, colleges need to start rewarding coaches for encouraging their players' growth in the classroom as much as their success on the field.

The student-athlete relationship in this country has always been out of balance. Colleges grow rich off of ticket sales, television rights and merchandise while many athletes struggle academically and ultimately fail to graduate. This crisis regained national attention in 2011, when the Institute for Diversity and Ethics in Sport (TIDES) released an exposé of black and white graduation rates on men's Division I basketball teams.

The report found a gaping racial gap. Overall, white players graduated at a 32 percent higher rate than their black teammates. Many large colleges and universities failed to graduate even half the black players on their teams. At the University of Akron, the men's team had a 33 percent graduation rate -- and a 33 percent white team. The graduation rate for black students? Zero.

In the wake of the report, the NCAA Board of Directors finally took action. Urged on by TIDES, the NAACP, and U.S. Secretary of Education Arne Duncan, the NCAA's governing body voted to raise the minimum four-year Academic Progress Rate, effectively setting a minimum graduation rate for teams involved in the men's March Madness tournament. According to the new rules, any team that fails to graduates half their players for three years in a row is banned from postseason play. They also lose access to scholarship money.

This higher standard has helped bring the student-athlete relationship back into balance somewhat. This year, ten schools were banned from the March Madness tournament for poor grades, including perennial power house University of Connecticut. The graduation rate for black players in this year's tournament increased from 59 percent to 65 percent, and the overall graduation rate inched up to 70 percent.

However, the race gap still is stubbornly persistent. The 65 percent graduation rate for black players this year is still 25 percentage points lower than the rate for white students. Nearly half of the teams that participated in this year's tournament suffered racial gaps of 30 percent or more.

One solution is to change the incentive system for college coaches. According to a recent study, the average bonuses for athletic achievements are 11 times greater than bonuses for academics. In recent weeks, USA Today's editorial board and former Maryland Congressman Tom McMillen both suggested that coaches' bonuses should be tied more strongly to players' academic performance.

Coaches' contracts should reflect the spirit of teamwork and mutual responsibility that makes the NCAA the premiere institution for young athletes. Coaches should be rewarded for effective strategies that keep their students at the top of their academic game. One example of how to do this comes from Xavier, which employs a nun as academic adviser to make sure that students attend class and study hard. Xavier has graduated every men's basketball player, black and white, since Sister Rose Ann Fleming began advising in 1985.

Colleges and universities clearly benefit from their students' athletic performance. They should also push their student-athletes to perform at peak academic capacity. That is the only way we can ensure that college athletes are prepared for victory in life as well as victory on the court.

This column is reprinted from The Trice Edney News Wire