What is it like to have diarrhea in the cockpit as a fighter pilot?: originally appeared on Quora: The best answer to any question. Ask a question, get a great answer. Learn from experts and access insider knowledge. You can follow Quora on Twitter, Facebook, and Google+. 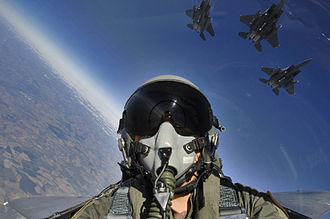 Sorry for the outburst, but this is the pilot's greatest fear. Even beyond enemy aces, missile batteries, or parachuting into a sea of sharks with frickin' laser beams attached to their heads!

Let me get this right out in front: not only did I never experience this, I never even urinated while in a tactical aircraft. I didn't want to let my body know that this was a thing, having heard too many tales of pilots having to go several times each flight. Anyway:

My favorite university instructor, CAPT (ret) George Faulkner, USN, started his career as an F-4U pilot in '46. He told me about dash-5 in an 8-plane formation, who'd slipped out and was flailing away a bit behind the rest of the formation. After lead instructed him--as dash 2--to go find out the matter, he flew over and looked down into the cockpit. The other pilot had his flight suit down around his knees and was crapping in a glove. Several minutes later he rejoined. I never found out if he got a new callsign out of that.

During one of my early at-sea periods, we had an emergency pull-forward, where all the aircraft parked in the landing area were quickly unchained and moved forward in order to allow a plane to land. As a junior LSO, just learning the role, I raced up there to help wave the guy aboard, expecting a damaged bird, or at least a single-engine. But as he came in on a short straight-in, he called the ball, "203, Tomcat ball, 6.2, emergency, physiology." I didn't even hear it right, but some of the saltier paddles sprouted huge grins, "Roger ball, 10 knots, down the angle." BAM! Trap, over to parking, and shut down. Even before the chains were completely tied down, the canopy was coming up and the RIO was leaping from the cockpit. They said that he almost made it to the head that's right inside the base of the island.

One of the department heads of the S-3 squadron, an NFO, was out on a routine tanker hop when Nature called. Of course, the way he described it, Nature sent a dozen Jehovah's Witnesses on meth with AK-47s and a fresh will to spread the Good News. He clambered into the little space where you board the plane. He was ready to sacrifice his really nice helmet bag, like the ones these boys are toting.

Like these E-2 bubbas, the Viking guys wore no oxygen masks, nor G-suits (which was likely the downfall of the F-14 RIO of the last paragraph). While the pressure was building to fantastic heights, he was able to go to one-quarter mast -- flight suit around the knees -- and opened the bag just in time. He underestimated the explosive power, though, and shot high, hitting everything except the inside of the bag. When they landed about 30 minutes later, the whole crew were very noticeably wearing their oxygen masks. To his credit, after the rest of the guys tumbled out, he warned off the plane captain and deck chief, taking almost an hour to clean the inside of the plane, then tossing his bag and flight suit into the sea and soaking his survival vest and harness for hours. Even the fate of his boots was a toss up.

I've heard similar stories from Air Force buddies, with fewer details, but the tale is always the same: horror, shame, and a terrific shambles. There are so many nooks and crannies in a cockpit as to make removal almost impossible if things aren't well-contained.

On top of the nasty after effects, the condition is usually accompanied by severe cramping. At the wrong time, this could certainly bode ill for a pilot, be it during a landing or in combat. There's just no knowing if we've lost anyone to gastrointestinal distress, but I wouldn't like to think about it. That's not the way I'd want to go. I prefer a newspaper and a quiet few minutes.