I am serializing an unpublished book in this column. It's about an amazing, mysterious manuscript I discovered in Scotland. It's a little book with nothing in it but 50 watercolor paintings. No one knows who painted it, or when, or where, or what it means. I was so entranced by this that I wrote a whole book of comments and thoughts on it. I call the book What Heaven Looks Like because the person who painted this was dreaming, I think, of an ideal world, a kind of heaven.

I'm calling this week's post "World's Strangest Paintings for the New Year" because four of the images I'm reproducing here are about the weirdest things made before modernism. (Have a look at that second image!) Whoever this artist was, she had an utterly amazing imagination.

You can read the previous installment, if you want to, and it has links to the ones before it: but if you're coming in late, no problem. No one knows what this book is about, so you can suggest your own ideas, and we can build a collaborative interpretation.

I am collecting people's suggestions, both here and on Facebook, and I am going to put them -- with full credit of course! -- into the book when it's published. So feel free to add your ideas. 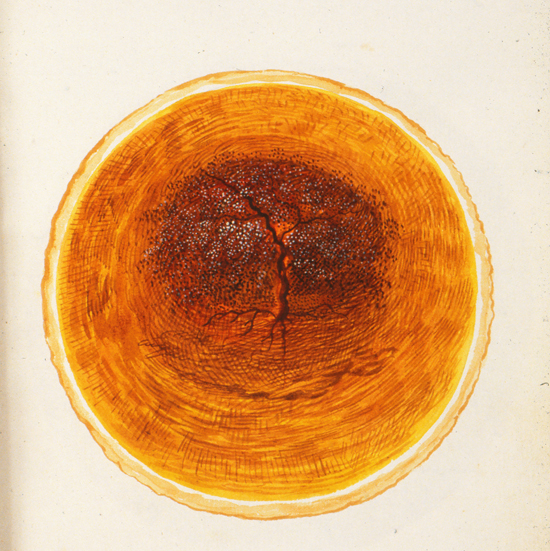 I imagine the artist working on these paintings over a fairly long span of time. Each picture one would have taken three or four hours, or effectively an entire day, to paint, and she might well have spent long periods just looking at the trunks, or thinking about how a painting was developing. Do I really see a dragon there? Or is it a man, or a young woman? Nothing is done by rote. This picture may have been especially difficult because it appears that nature gave her very little. The log she was looking at -- her inspiration -- was a uniform piece of wood, leaving no room for the imagination.

Naturally, the tree suggested another. A large crack that had developed in the heartwood became the trunk of the painted tree, and the core, which may have begun to darken and rot, became its leaves. Notice the artist's fastidiousness: she does not invent a ground for her painted tree, but follows the cracks that must have already been there, making them roots. A small discoloration below the crack nearly becomes an animal: it gets a face, almost, on the left (a beak, perhaps even an eye) but it never quite comes into existence.

As I think of her working, looking into this stubborn log and not quite seeing anything, I think of what it would be like for most of us to find inspiration in dead wood. The great majority of people see nothing in nature except what is there, and the majority of artists paint more or less realistically: in these terms, they see nothing. Any interesting art, I think, is the product of an engaged imagination that is at least as strong as what it encounters. That is the modern mindset: if nature exists at all, it is a cipher, or a projection, or an opportunity for a display of imaginative force. 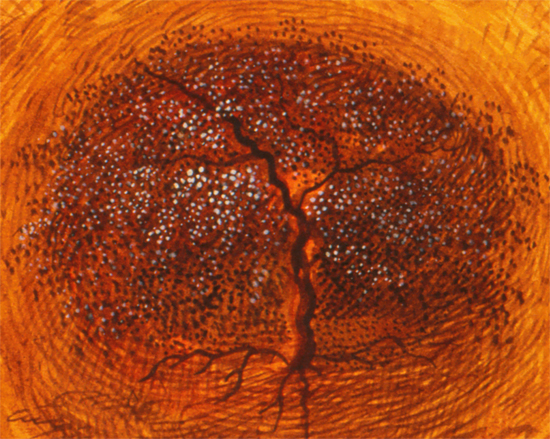 Or maybe that is just bluster. This is a beautiful tree, with its white leaves upturned by a gentle breeze. It rests with perfect delicacy on a frail ground and on the faint thought of a dragon. For the moment, her imagination has almost been cleared of its ghosts. 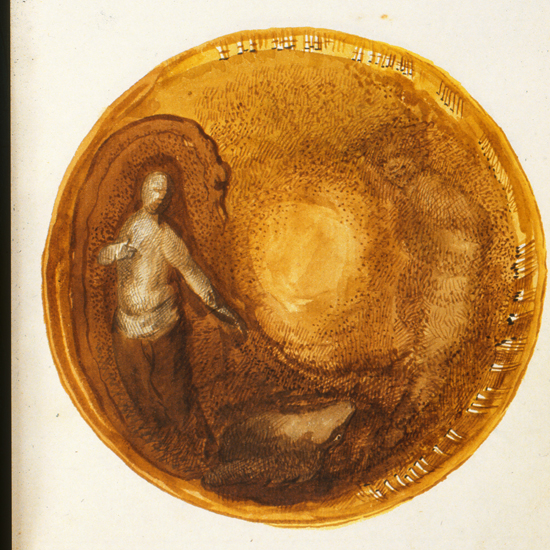 And then they return in full force. On the left are two stock figures of alchemy, both distorted into unique creatures. Snakes, and especially snakes biting their tails, are alchemical symbols of self-destruction and acid corrosion. This one has a typical Baroque beak (whales and snakes were drawn this way) and flaccid body. 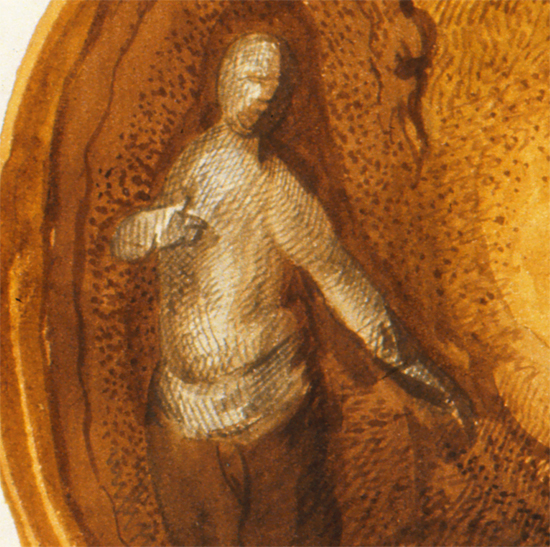 It curls over a chalky figure who may be an unfinished statue, or a person wrapped in a winding sheet. It has no expression, no gender, and no feet. In alchemy such figures are called hermaphrodites, and they denote the half-finished work, when the metals are still unformed. This is an especially strange one, like a natural Galatea metamorphosing from peat into chalk, instead of marble into flesh. 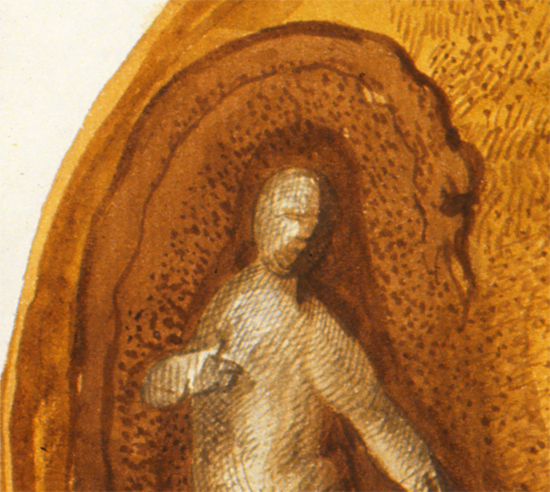 As a pair they do not make sense, but at least they have more meaning than the rest of the painting. They are both looking down at a monstrously large frog, as big as a plump hassock. It has bent over backwards so that its white throat and belly are facing upward. There is one small white expressionless eye, and a gigantic leg folded underneath. (It has no front legs at all.) 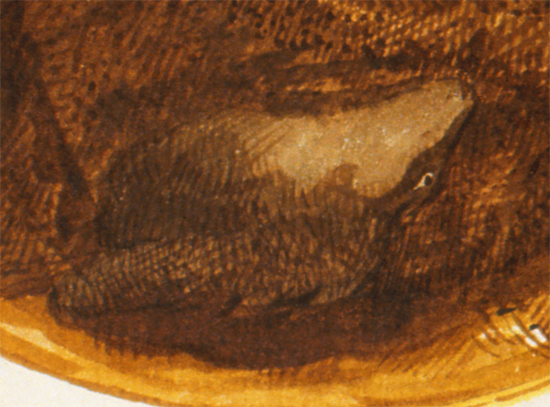 Just that would be enough to make this one of the oddest paintings ever made, but the frog is apparently looking up toward another figure: a big, furry, well-disposed panda-like person with a single cloven hoof who smiles benignly down at the whole mad scene. Alchemists also enlisted frogs, toads, and salamanders in their stable of symbolic animals, and I could say the frog represents the muddy refuse that alchemists treasured for its hidden potential. But no alchemical frog is anything like this obese, puffed creature with its incomprehensible gymnastic flip. The panda-person is well outside even the eccentricities of alchemy, and his smug smile has no parallel before Maurice Sendak. 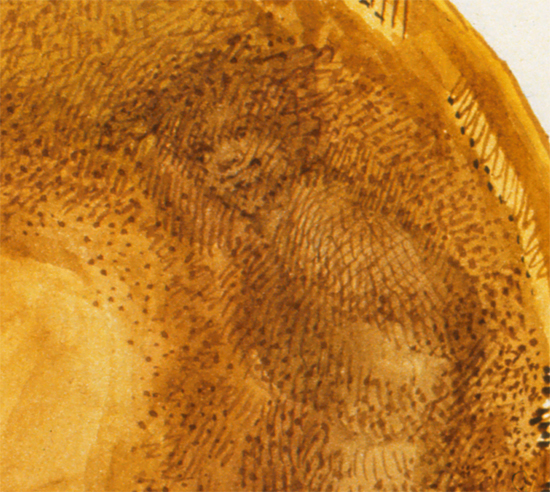 At the center of the painting there is a void that shifts and moves with half-seen figures and faces. I think the artist intended it this way: she was being true to her conviction that some figures are rubbery, others chalky, slimy, or furry, and still others made of light. Around the outside of the painting there are little perforations that burst with spikes of light, very carefully and slowly painted.

A literal-minded historian could find a meaning for this painting: the hermaphrodite, snake, and frog all allude to alchemy, without getting it quite right, and so they could be reminders of the profound natural process that led to the alchemists' goals of redemption and purity. The fuzzy little faun could--at a big stretch--be the alchemist presiding over the work. Such figures (that is, of more ordinary-looking alchemists) are not unknown. But what a disservice such an interpretation would be. It would throw away the picture's strangeness in the name of some dubious historical precision. The same disaster has befallen Hieronymous Bosch and other artists who use (or misuse) a few arcane symbols.

I find this picture very hard to stomach. It is delightful--at least the frog and the Yeti are enchanting--but it is also weird and claustrophobic, with its nearly faceless figure and rubber snake. It has no message, and it is in no mood: at least no mood I have ever had. 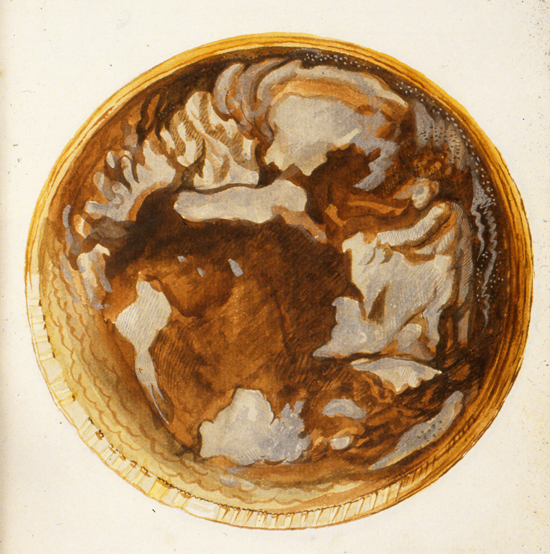 Now it is very late twilight, almost night. In this topsy-turvy world, there is sky at the lower left; to me it looks like late autumn, with a few cold brown clouds scudding past. The sun has recently set. Little shafts of light shine with pale golden rays, like the crepuscular rays that point toward the sun after it has set. In the other direction, at the upper right, it is already full night. It is freezing, and a light snowfall drifts down along the upper-right margin. 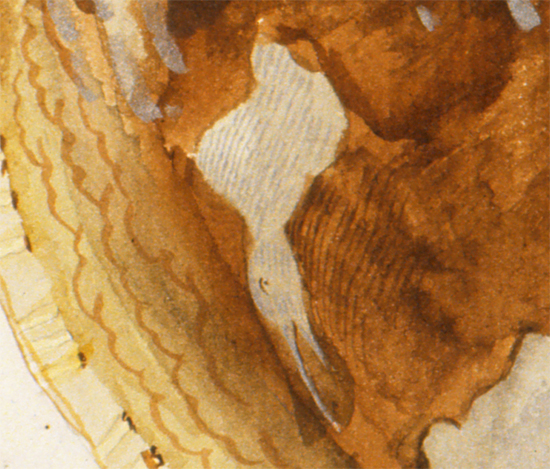 This is the time of day best suited for phantoms. A silvery bird glides by on the left, its beak merging with the horizon and its body melting into the shadows. At the lower right another creature passes by: a small, spotted, limbless thing, with a stout head and a tonguelike tail. 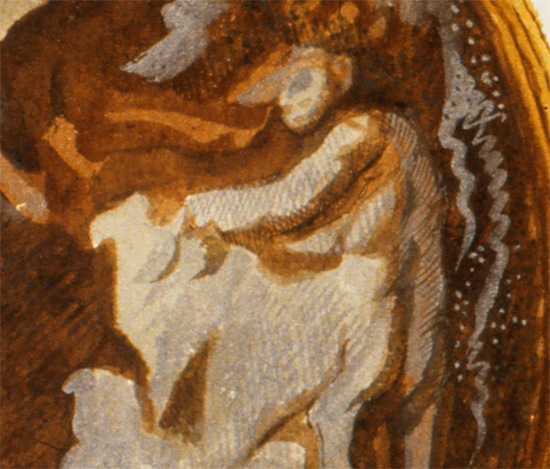 A person watches over this lonely scene. His left arm is stretched out, holding a sheep or ram by the scruff of its neck. At the ram's feet there may be another animal--perhaps a sheepdog--sitting.

These are just the faintest clues, but they paint a coherent picture: a shepherd, out late and at the end of the season, prepares to take the last stragglers of the herd back to their pasture.

Or at least that is what I sometimes find myself thinking, when I need to make some sense of it.

Next installment: the book continues with pictures of lions with crowns, the Star of Bethlehem, sheep in amber, and Jesus in Limbo.

Art critic and historian, School of the Art Institute of Chicago