Instead, the the popular author and religion scholar was rolling into the Sagrada Sacred Arts bookstore in Oakland, California, in a push wheelchair, ready to do what he does best - say something.

The man has taught religion at MIT, Syracuse University and UC-Berkeley and he has fifteen books to his credit, including the award-winning Why Religion Matters and 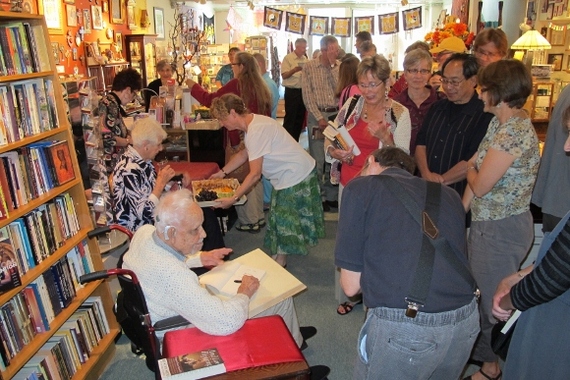 Huston Smith signed copies of his book at Sagrada. Photo by Barbara Newhall

the perennial The World's Religions, which has sold more than two million copies.

If I were in his shoes, I'd be sitting back in my push chair and calling it a day. But Huston Smith still wasn't quite done speaking his mind.

There was one more thing he wanted to say, and he was going to say it to the dozens of fans and devotees who'd squeezed into the colorful Telegraph Avenue bookstore on this sunny day in 2012 to ask him to sign copies of his latest - and probably last - book.

(There are no guarantees about that "last" part. When I'd written a post about his Tales of Wonder a few years earlier, I was pretty sure it would be Huston Smith's swan song. Not so.)

The title of this latest book says it all, Huston told the crowd. It's a memoir, stories of pivotal moments in the author's personal and spiritual life. The title, And Live Rejoicing, is taken from the eighteenth century hymn, "Oh Happy Day," popularized in the '70s by folksinger Joan Baez.

When Jesus washed my sins away.

He taught us how to watch and pray,

And live rejoicing every day.

The point Huston wanted to make on that day, toward the end of a life of studying and, in some cases, practicing the world's great religions, was this:

Happiness -- we should have more of it.

Happiness is the human birthright," he said. "And if we are not happy then that's a sign that there is something wrong with what we are doing - to alert us to the fact that we must change."

In other words, from his vantage point of nearly a century devoted to the study of life and truth and the meaning of it all Huston wasn't telling his fans they could have more happiness. He was telling us we should have more of it.

To live rejoicing is something of an obligation we have as living, breathing sentient beings with just enough free will to make some choices.

His happiness point made, Huston's nonagenarian brain skipped to another topic - his years growing up the son of missionaries in the town of Dzang Zok, China. He told a favorite story about how from time to time in Dzang Zok the moon had to be saved from dying.

"What do you mean save the moon? Well, on the other side of the globe in the small town where I grew up saving the moon was serious business."

Whenever there was an eclipse of the moon, it was believed that a dragon was swallowing the moon. The townspeople would rush to save it by pouring out of their 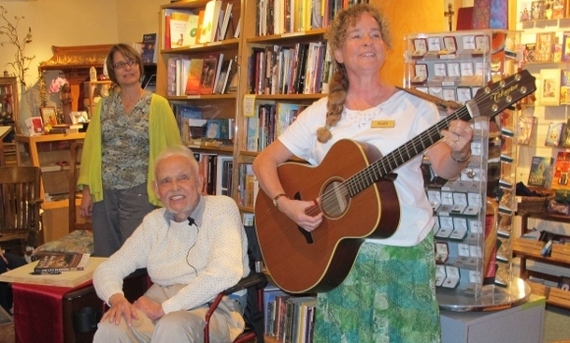 Mary Busby of Sagrada and Huston Smith led the crowd in "How Can I Keep From Singing?" Photo by Barbara Newhall

houses in the middle of the night banging on pots, pans and other noisemakers to scare the dragon away.

"The strategy always worked," Huston noted. "The moon was saved and, come to think of it, it is still up there with us today."

During the Q&A, someone asked whether Christianity and Zen were compatible.

Huston said he thought that all of the major religions - he calls them revelations - were channeled by the divine. "I do not prioritize any one of them, not my Christianity or any one of them. If that be heresy, then make the most of it."

Still, he said, "I was born of missionary parents and that meant that I was imprinted with Christianity from the very beginning. You peel Christianity off of me and there is no Huston left."

A version of this post originally appeared on BarbaraFalconerNewhall.com, where Barbara posts regularly about the view from the second half of life. Learn more about her new book at WrestlingWithGodBook.com. If you enjoyed this post, you might want to read "The Trouble With Daffodils." 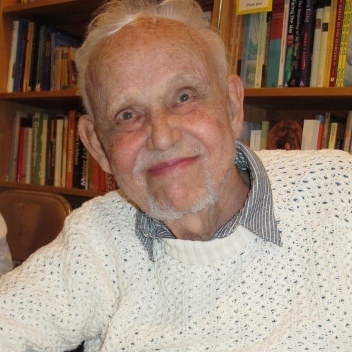