In its coverage of the Iowa caucus, the New York Times quoted
a pastor who said he'd be voting for Mike Huckabee despite his serious
reservations about the candidate's belief that it's possible to serve
"God and rock 'n' roll at the same time."

Huckabee plays bass guitar. He recently showed his chops on the Tonight Show.
But the Iowan pastor's concerns are out of synch with contemporary
American evangelicalism.Fundamentalist
churches that say "Christian Rock makes as much sense as
Christian Adultery" are a dwindling fringe. The vast majority
of evangelicals, even the most theologically and politically
conservative ones, have embraced rock 'n' roll for decades.

And yet there are fierce debates within evangelicalism about whether
secular rock is as acceptable as Christian rock and even about the
ideal purpose of Christian rock -- is it entertainment? evangelism?
ministry? So it's worth noting that the band Huckabee plays in is
what's known as a praise and worship band. That's the "safest," most
"religious" and most insular variety of contemporary Christian music.
The fact that it's Huckabee's genre of choice also explains the
origins of his mysterious campaign buzzword: " href="http://www.google.com/search?client=safari&rls=en&q=site:mikehuckabee.com+vertical&ie=UTF-8&oe=UTF-8">vertical."

Josh Marshall posted about href="http://talkingpointsmemo.com/archives/062745.php">Huckabee's
vertical politics last night. "Can anyone explain what the hell
that means?" Marshall asked. "Is there something I'm missing here?"
Soon enough, he posted an update suggesting that the phrase might be
"crypto-evangelical code wording... a clever dog whistle call out to
Christian fundamentalists and evangelicals that his politics are God's
politics."

Marshall is mostly correct. The phrase is Christianese. And
while it's used in a variety of contexts, it's most commonly applied
to distinguish one type of contemporary Christian music -- the type
that Huckabee plays -- from others. As the Lyrical Theology blog href="http://lyricaltheology.blogspot.com/2007/08/vertical-encouragement.html">put
it, "Christian lyrics can generally divided into two categories.
1. Lyrics that are horizontal, or directed towards people, and 2.
Lyrics that are vertical, or directed towards God." A few years ago,
the top A&R guy at Word, a major Christian record label, href="http://www.taxi.com/faq/ar/bourgeois.html">explained what
this means as a practical matter: "Overt, or vertical, lyrics are
lyrics that are not afraid to say 'Jesus' or 'God' in them. 'Vertical'
meaning: I am speaking to God, or God is speaking to me, or this is a
prayerful song. The lyrics are out in the open--overt--about the
Christian faith, praise and worship or the like." Horizontal lyrics,
on the other hand, "are the type that could often be love songs, but
the You is with a capital 'Y.'" Snarky young Christians call these
"God-is-my-girlfriend songs." The vertical language is so commonplace
that Christian entertainment sites like href="http://www.crossmap.com/">Crossmap use it href="http://www.google.com/search?hl=en&newwindow=1&c2coff=1&safe=off&client=safari&rls=en&pwst=1&q=+site:lyrics.crossmap.com+christian+lyrics+vertical">frequently
without any explanation. There's a Christian record label named href="http://www.verticalmusic.com/">Vertical Music.

There is zero chance that Mike Huckabee is using this language
unintentionally. The candidate published two books last year. In
Character Makes a Difference he writes, "The Ten Commandments are
divided into two sections -- the vertical laws dealing with man's
relationship with God and the horizontal laws dealing with man's
relationship with others." In From Hope to Higher Ground, he writes,
"We don't need our leadership to embrace a horizontal direction, but a
vertical one -- we need to aim up -- not just right or left."

There was a period when George Bush got a lot of grief from the left
for using evangelical code words. Sometimes I agreed, but just as
often I found the charge paranoid. What Bush does is use biblical
metaphors -- a perfectly reasonable, even literate, mode of speech.
It's not his fault that secular elites don't always recognize the
language of the King James Bible, and it shouldn't automatically be
seen as sinister to employ such time-tested rhetorical devices.
Huckabee's "vertical" metaphor, however, isn't lifted from the Bible.
It originates in a particular strain of Christian culture. But I don't
think that necessarily means he's intentionally using code
words. A charitable interpretation -- perhaps overly charitable, but
not unreasonable -- is that he's simply adapting language that he's
comfortable with to an entirely new purpose. Indeed, there doesn't
seem to be any hint of theocracy in Huckabee's frequent deployment of
the "vertical politics" line. He's not saying that "vertical politics"
deal with "man's relationship with God." Instead, he's turned
"vertical" into exactly the kind of vague and meaningless pablum that
candidates always use. It's merely his way of saying "positive" or
"hopeful," except that while those shopworn phrases completely fade
into the white noise of the campaign, "vertical" cuts through the
clutter. It works on a purely attention-getting level. It may well be
that the word's function as a signal to the evangelical base is just
an added bonus.

Keep in mind that when Huckabee talks about "vertical politics" he
contrasts it with a negative, destructive "horizontal politics." But
in Christianese, "horizontal" carries no such connotations. Talking to
God is important, but so is talking to people about God. True, many
evangelicals believe that "vertical" is better than "horizontal," but
they wouldn't say that horizontal is bad. And it's not hard to find
evangelicals who href="http://www.thejournalofstudentministries.com/articles/28/1/Vertical-Worship/Page1.html">say
that Christian music does not put enough emphasis on the horizontal.
There are a lot of reasons to be concerned about Mike Huckabee, but
his decision to repurpose a Christian buzzword now and then hardly
seems like one of them.

A related note. While searching for references to verticality on the
web site of CCM magazine, the leading Christian music publication, I
was startled to see this pop-up add. 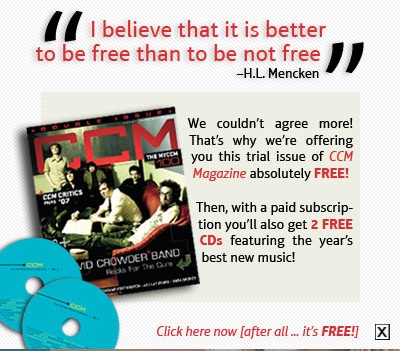 Yes, CCM is using a quote from H.L. Mencken to sell subscriptions.
Leaving aside that this particular quote refers to individual liberty,
not free magazines, Mencken is a bizarre choice. One wonders why CCM
didn't go with a more familiar Mencken quote, like, "I believe that
religion, generally speaking, has been a curse to mankind -- that its
modest and greatly overestimated services on the ethical side have
been more than overcome by the damage it has done to clear and honest
thinking."

Last week I wrote
that the Christian culture bubble does not do irony. What I meant, of
course, was not intentionally.