The Ebola epidemic, like SARS, MERS, and H1N1 before it, shines a sudden and intense spotlight on the public health system.

From our highest ranking government officials to the frontline workers who are responsible for disinfecting homes and interviewing contacts, every decision, action, and outcome is scrutinized and criticized. Under normal circumstances, the public health system is working to ensure that the places we live, work, and play are safe and that we are generally free to go about our lives without worrying that we'll get sick from the food we eat or the water we drink.

When there is an infectious disease outbreak like Ebola, the narrative of fear overtakes the media and many of our political leaders. As criticism of the Centers for Disease Control and Prevention intensifies and impulsive and irrational solutions like a travel ban from West Africa are proposed, we are ignoring the true danger to the American people: our thinly stretched, overburdened public health system.

Most people don't realize that there is no minimum national standard for state or local health departments. The public health workforce that you will be relying on in the case of a deadly outbreak is inconsistently and unequally funded, staffed, and trained. Without such standards, public health systems not only vary from state to state, but city to city. 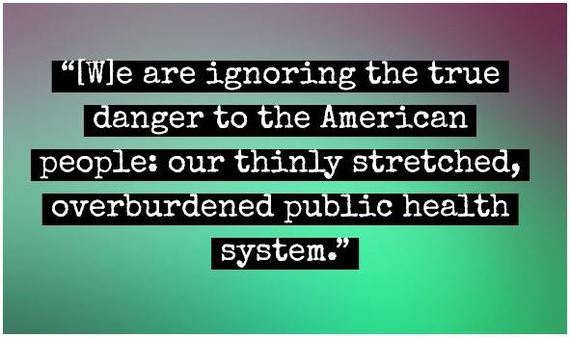 Since 2008, the state and local health department workforce has been cut by nearly 20 percent, but those cuts aren't equally distributed. As a result, existing disparities in public health system capacities and capabilities have only become more extreme.

Even if your community has all the protections it needs, what about the next county over? Where we live may not be where we work and play.

In an outbreak, diseases don't respect city or county lines. That's why the health of your own community is intrinsically tied to the strength of public health services in surrounding communities.

We are going to manage this current outbreak. Long term, however, we need more significant fixes to ensure the safety of all Americans against possibly more challenging outbreaks.

Simply put, we need a public health system in which all Americans are guaranteed basic public health protections regardless of where they live.

To achieve this goal, the Institute of Medicine outlined a minimum package of services that would establish baseline standards for core public health functions like disease control, emergency preparedness, and environmental health protections, among others.

Another strategy to bring consistency to our nation's public health system is the movement for health department accreditation. Health department accreditation creates a baseline level of access, professional standards, and accountability on which citizens can depend regardless of where they live. The national Public Health Accreditation Board (PHAB) accredited its first eleven health departments in 2013 and increased that number to 54 by September 2014. Both strategies will require funding and the political will to see it through as we prepare not just for the crises we face today, but for the unknown challenges that await us.

Our nation's current underinvestment in public health places us all in jeopardy.

Whenever there is an outbreak, there is political and public outcry that dies out as soon as it is controlled. We have the great privilege of living largely free of fear from infectious disease, but it comes at a cost -- investment in and ongoing support for the public health system.

---
Brian Castrucci is the Chief Program and Strategy Officer at the de Beaumont Foundation. He is a recent participant in the Terrance Keenan Institute for Emerging Leaders in Health Philanthropy. Prior to joining the Foundation, Brian spent a decade working in state and local health departments. Follow Brian on Twitter at @BrianCCastrucci.

The opinions expressed in this post do not necessarily reflect the opinions of the de Beaumont Foundation.

More:
healthy livingdiseaseSocial determinants of healthCenters for Disease Control and Preventionepidemiology
Newsletter Sign Up
An essential daily guide to achieving the good life
Subscribe to our lifestyle email.
Successfully Subscribed!
Realness delivered to your inbox