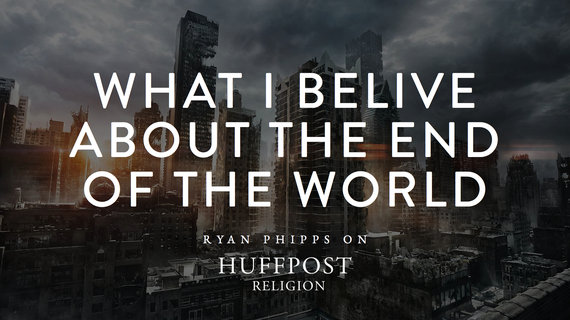 IS THIS THE END?

It seems that every generation of believers think they are living in the "End of Days."

And why wouldn't we? With all that we see in the media one can begin to think that we may be the generation to finally witness it.

It's easy to grow apathetic as we observe the state of our world. It seems that all that is bad is ever outnumbering all that is good.

I'd imagine you could add hundreds of other things to that list.

Are we spiraling uncontrollably toward the end, or is there something we can do to stop it?

WHAT I USED TO BELIEVE

When I went to college I had an eschatology course where I was taught that a global event called "The Rapture" would occur in which God would extract all the true believers from this world in the blink of an eye.

I was taught that this event would be so cataclysmic that it would plunge the entire world into a "Great Tribulation."

I no longer believe this, but in my early twenties I did.

It's odd to me how some in the church capitalize off of tragedy and disaster.

I do acknowledge that this is one way to look at prophecy, but I no longer subscribe to it. I can see it now for what it truly is: a self-fulfilling prophecy.

What we believe about God determines what we bring about in the world.

WHAT I BELIEVE NOW

One of my heroes, the brilliant Carl Sagan once wrote:

"In the long run, the aggressive civilizations destroy themselves, almost always. It's their nature. They can't help it. The sky calls to us. If we do not destroy ourselves, we will one day venture to the stars."

It's interesting (and terrifying to me) that this is precisely what we see happening in the world today.

When we believe in a world with a "death clock" ticking down to zero, this translates into human behavior that treats the world and its inhabitants as temporary, disposable things.

After all, if this is just temporary, why do anything to make it better?

This is in such contrast to the theology of Jesus, who taught us to pray for it to be, "on earth as it is in heaven."

"This, then, is how you should pray: Our Father in heaven, hallowed be your name, your kingdom come, your will be done, on earth as it is in heaven."

I wonder if the solution for our world (as it pertains to the behavior of the church) is to start looking "outward" instead of "upward." Looking at our neighbors, our schools, our churches, our institutions and businesses, asking, "How can I make things more heavenly right here, right now?"

When we believe in a God who thinks of all of this as disposable, that is exactly how we treat it.

Years ago, my eschatology drastically shifted. I do not believe God is going to destroy the earth, but I do believe it to be highly probable that we will because of how we process and practice our beliefs and values.

We behave just like the God we believe in.

What kind of a God are you imitating? One who wills it to be "on earth as it is in heaven," or one who sees this all as a "disposable-testing-ground" whereby we earn a "heaven" somewhere else?

My heart breaks for the current state of our world.

My heart breaks for those without access to shelter, food, and clean water.

My heart breaks for the oppressed, the sick, the poor, and those who've given up on hope.

We can plead and pray all that we like for God to make it better, when in reality it's not up to God. It's up to us.

Our world is not disposable. It is what we make of it, and its condition is a direct bi-product of what we deeply believe about God and others.