Ross called our dog's name from the opposite side of the backyard.

Our Australian Shepherd sped past me, her furry black ears flopping along with her stride.

When she ran, she flew. The swings swung in her wake.

As soon as she reached Ross, it was my turn to call her to keep her running.

"Syyyyyyydney!" I yelled from behind the biggest Oak tree I've seen in suburban Pennsylvania.

There she came, barreling towards me, her eyes wide and her snout smiling.

Back and forth, we sang her name.

Back and forth, she ran.

Clara must have heard us. Her three and a half year-old giggle grew louder and louder until I felt her arms hug my shoulders.

I hoisted her on my back and took her inside for lunch.

They followed us in,

I met Ross my freshman year in college.

Eleven years my senior, he was my philosophy adjunct professor at Temple University in Philadelphia.

He was cute, Jewish, and intensely attentive.

I was an A student in all of my honors courses. I thought a philosophy course would be easy.

Wearing oversized glasses and a blue-hued plaid flannel shirt that swam on his small form, Ross appeared enlightened. Thick, black bristles grew unevenly over his ears and the back of his head. He insisted on cutting his own hair.

I quickly sought extra help, trying to understand fallacies and truth tables and how to create sound arguments. I was determined to grasp both deduction and induction, both complex symbolization and truth-functional connectives.

When it came to standard logic, I needed to know: can I apply this to real life?

But I couldn't see how.

How could these intricate argument structures play out in the world?

I wrote an essay about it, even though Ross didn't accept extra credit.

He ruined my 4.0 GPA, but I ended up dating him anyway.

For our first date, he suggested we meet at the new 400-seat auditorium in Temple University's music hall.

Our steps echoed up the stairs.

Overlooking the empty chairs, I sang and played original music for Ross on the grand piano. His smile reflected in it.

"Music is what you should be doing. No question," said the philosopher whose job it is to question everything.

Ross and I thought and talked about what's important. What those asleep don't speak of -- why we are here, who we are, what is good, what is truth.

What is authentic joy and how do we find it?

The more I inquired, the less I knew.

Still, Ross drew me closer to what seemed real.

After we played music and shared seafood crepes on South Street, Ross pulled up in front of my dorm and hesitated before he spoke.

"I want to have children. I don't want you to feel pressured, but if we're going to date, I need you to know this."

"I love kids." I laughed awkwardly.

We spent every weekend together.

And more of every week.

Until the only reason I returned to my dorm was because I needed clothes.

When Ross said he was tiring of philosophy and wanted to teach children chess, I found him his first job as a chess coach at my nephew's school.

When I started writing articles again for a local newspaper and building an outline for a musical screenplay, Ross said, "I hope you can see just a fraction of what everyone else can when it comes to your writing talents."

And when I decided to pursue a career as a singer/songwriter, he made sure we chose a home that inspired me.

Ross made sure I was happy.

After three years of encouraging each other in ways that mattered, it was time to move in.

We moved into an 1,100 square feet corner loft that teemed with natural light, even on gray days.

For my twenty-fourth birthday, Ross brought Sydney home to me.

At first I wasn't ready.

Sydney yipped all day when I needed to record a demo of original songs.

Ross persisted that I'd fall in love with her.

I ended up loving her more than I've loved most humans.

My favorite feature is the black stripe that travels all the way down from the top of her head, down and between her eyes, and stops just before her nose, leaving room for a tiny red line.

Soon after Sydney became ours, Ross and I played hide-and-seek with her at least once a day. Twice was better. But three times was just enough.

Herding dogs need to run to be happy.

Ross needed to be a dad to be happy.

He desperately wanted a little girl. He could already see her: Light brown curls, big brown eyes. He needed to find the path that led him to her. Together we would find it, but not as a couple. I knew I had to let go.

For too long, I couldn't.

But when I did, that's when our relationship bloomed as it should. Not as boyfriend and girlfriend, but as friends. I moved out of our Center City loft two years after moving in. I worried I would lose my two best friends. But Ross continued to text me on the way to the dog park, as if it were natural for me to still come. I'd meet him halfway there and we'd resume our route, Sydney strutting beside us.

I confided in Ross about my deepest anxieties. About how I worry that we will disconnect from the people we love after we die.

"That scares me," I admitted.

"I know. But I also believe that our perception of time does not accurately represent reality. The notion that we can or cannot contact a loved one after we die seems misguided. I believe that in a sense, we have not yet been born, and yet we're already gone. So everything is already okay."

Our discussions went on until Sydney was eager to run.

Our walks continued, even after I met my next boyfriend.

He asked me to help him create his OkCupid profile. He insisted that Sydney be in the photos with him.

I positioned my ex-boyfriend and my ex-dog in front of my front door and took their photos with my phone.

In the first four, Ross's eyes were closed.

The fifth was just right -- eyes open, mid-laugh, Sydney's puppy face looking up at him.

After many unsuccessful dates, some uninspiring and some downright horrible, Ross became disillusioned. I encouraged him to press on.

That's when he met Allison.

"You have to meet her," he said on the phone the morning after their first date. "I'll bring her by tomorrow before we go to dinner."

"Don't you think she'll think that's strange?" I asked him.

But when I met her, I saw what Ross saw and I knew what he knew.

When he said they were engaged, I felt happier than if it happened to me.

I cried when Allison walked down the aisle.

And when my latest relationship ended in debilitating heartbreak, and my grandmother died around the same time, Ross was there, making sure I ate, making sure I left my bed.

He made sure I had a home. My lease was running out and since my plans to move in with my boyfriend fell through, and Ross happened be moving in with Allison, he offered to rent out our old loft to me for a nominal fee.

He helped me move.

He let me keep his piano.

He let me have Sydney for a while, even though we decided that he'd keep her.

Sydney slept in a "U"-shape, cradling my head, knowing just what to do to make me feel safe. Letting me know I'm loved.

I felt myself getting better.

Some days, I'd get a text from Ross:

"Can I come up and use the bathroom?"

He wasn't kidding. He taught philosophy and chess at multiple schools and zipped around the city on his bike. By then, he had become one of the most sought-after chess coaches. Our old place was the perfect pit stop.

"Ross is in my bathroom again. He's been in there a while."

Then he'd open my fridge and help himself to leftover Indian food.

On one of his visits, he had something to tell me:

"Allison's expecting. I hope it's a girl."

It was. And after beautiful Clara, who, at three years old says "I love you" indiscriminately, there came a boy.

His name is Kellan, and he has a perfectly proportioned face and perceptive, bright green eyes.

One weekend, Ross needed to coach a chess tournament in North Carolina. He asked me to stay with Allison and help her with the kids. She and I stayed up late, chatting about everything, as if we were friends for years.

When Ross, Clara, and Sydney and I went inside, Allison and Kellan were already sitting at the table, plates and drinks out.

Ross handed me a cheeseburger. He was crying.

I was moving to California the next day to live with my boyfriend.

"I'm so proud of you, Lauren," He said, like a brother who has loved me all my life.

Sydney burrowed her nose in my hands.

She stayed with me a little longer, as if she knew I were leaving.

Then she took off.

When she ran, she flew. 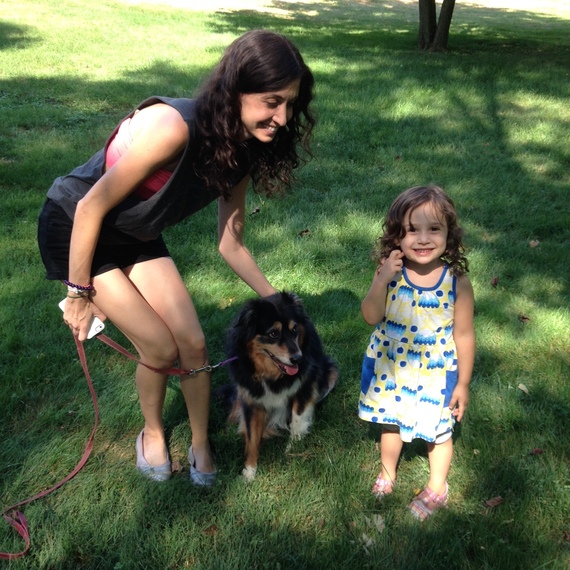