"I just don't like it," George said on his way to the table. That's right. He wasn't even sitting down yet. He had no idea what "it" was.

But George is 2 and that's his auto-response to MANY things, sometimes including dinner.

I knew it might be an uphill meal. He's always tired at this time of day, and so am I. Last night we were serving a brand new meal that even I had my doubts about. Red cabbage with sausage, onions and apples. Full of nutrition and color but taste? We'd soon find out. 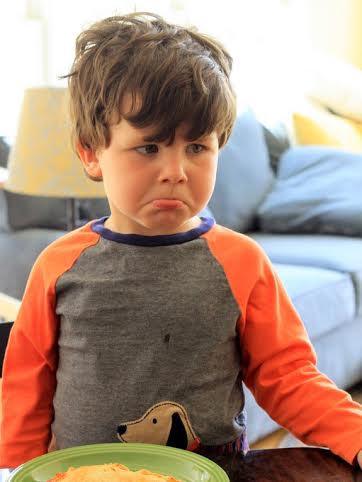 George's first reaction to another recent recipe, which he tried a second later. And ate the whole thing.

I put a tiny portion on his plate. That's when the screaming started. By everyone.

This isn't our usual thing. Typically we sit, we eat. Someone spills the milk. Run of the mill stuff. But not tonight. Phoebe, who is 5, was suddenly in hysterics over the music. I'd just turned on a little soft dinner music. Background. Meanwhile Estelle, who is 4, sat in quiet protest. Slumped in her miniature seat staring at the offending meal, arms limp at her sides. It was contagious.

That's how many of my evenings end up, especially if I'm serving dinner to our four small kids while my husband's still at work.

So, we sorted out the music issue. Phoebe calmed down and came to sit beside me at the table. Hot tears still wet on her neck. George finally crept over to his chair by Estelle. Then the strangest thing happened.

They all took a bite.

The whole episode, including the music tantrum, lasted about 10 minutes. But in End of the Day Time, that's about three hours. My head was pounding and my nerves were shot.

But at least everyone was quiet. Eating. Finally. Sigh.

And the transformation just kept going. "Oh, another apple please!" Doughy little arms stretching toward the pan in the center of the table. A few more bites. "Can I try the vinegar?" Just a little more. Happy faces, full tummies. Who would've thought we'd end up here after such a crazy start?

Dina Rose, Ph.D., author of It's Not About the Broccoli says kids don't operate logically when it comes to food. They're running chiefly on emotions, and habit. And I think she's right. It's a knee-jerk response. "I don't like it." In our house it's pretty consistent. Even though I serve my kids new foods almost every day. Even though they almost always like the new foods. Even though I never offer an alternative.

Another mom recently wrote about how shamed she felt by her picky eaters. About how she herself was an adventurous eater who did all the "right things" to broaden her kids' horizons, all to no avail. Both kids still only eat a handful of foods. Then along came their little sister, who eats everything. Same techniques. Different outcomes. (By the way, who is doing all this judging? Aren't we all pretty clear about how hard it is to feed kids well? Who ISN'T having a hard time? That's another post...)

I've been raising small kids and writing about food for a while now but I don't know what makes kids "picky eaters" any more than what makes them math geniuses. There ARE a handful of things I've tried to stack the deck in favor of nutrition and enjoyment, and they've become family habits that work really well.

Don't be discouraged.
Like everything else in parenting so far, feeding our kids good food is something we work on daily. We have ups, downs and plenty of times when I wonder what the heck am I doing this for? But I feel the same way about potty training and night sleeping and you'd better believe I'm not giving up on those either!

You know how your toddler sometimes screams the loudest before falling fast asleep? I finally figured out that if I can ride out the skepticism, the critiques and complaints for a few minutes at the beginning of a meal, we often arrive exactly where I'd hoped we would.

Eating happily at the table. Me, just as surprised as the kids.

Charity Curley Mathews is the founder of Foodlets.com: Mini Foodies in the Making...Maybe, where she writes about healthy family food and techniques for getting kids to eat it. Happily. Together. Most of the time. Find her on Facebook and Pinterest.