After 50 days of watching BP's pathetic failure to stop the oil from gushing and hearing stories of more corruption, cronyism and incompetence, I still don't get it.

Why are we giving oil companies a free pass to drill a mile below the ocean's surface, where the pressure is so intense it causes oil to shoot out like a rocket, when we don't know how to fix major leaks? This spill stains the entire industry so why aren't other oil companies like Exxon Mobil using their record profits to help stop this catastrophe? Or to develop cutting-edge ways to clean up oil spills when they inevitably happen? And why are Valero and other Texas oil giants paying millions to try to dismantle California's clean energy policies rather than putting money towards long-term clean energy solutions?

BP is responsible for this disaster -- there's no doubt about that. But they had partners. Why haven't more heads rolled at the Minerals Management Service, where our officials have cozied up with oil executives for over a decade? (I bet they forgot to discuss giant oil spills in all of Cheney's secret energy meetings.) How has only one person been fired, while the other 1,700 MMS employees -- the same people who let BP bypass safety tests - are still in their jobs and have approved over 30 new drilling projects since the Deepwater Horizon sank? And some of these new wells will be in waters even deeper and more dangerous than the Deepwater Horizon! Do you find that as outrageous as I do?

Why are we using dismal and inadequate boom technologies from the 60's to try to stop the biggest oil slick in U.S. history from suffocating our coastlines? With all the billions of dollars that have been poured into new 21st century drilling technologies, are absorbent pads really the best we can do? Really? Where are Shell's ideas, or Chevron's? 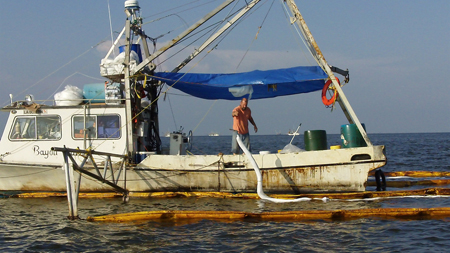 Why have one million gallons of toxic chemical dispersants been poured into the Gulf when we don't know the full effects on marine animals and plant life? And what about the cleanup workers who are getting sick? Lots of these were fishermen hired by BP to clean up the same disaster that already robbed them of their livelihoods. Now they're breathing in toxic fumes -- do we really need to kick them when they're down?

What will happen when the fisheries in the Gulf reopen and we start ingesting fish that have been swimming through plumes of oil? How many dead birds, fish and mammals, covered in grease, have sunk to the bottom of the sea where they won't be counted as part of the death toll of this disaster?

We have lost over 30 million gallons of American oil, so why is no one standing up telling us all to conserve? Even if this gusher is just a drop in the bucket in terms of the global market, that doesn't change the fact that oil is a resource that won't come back once it's gone. We are using petroleum at breakneck speed -- in our cars, our planes, our lawn mowers, and even our plastic bags and water bottles. So where's the movement to fast-track a high speed rail system (like China has), or ban plastic bags, or stop us from idling our cars while we wait to pick our up our kids at school?

As we together watch the horrors unfolding in the Gulf, why haven't Republicans reached across the aisle to help our government get America off its filthy oil addiction?

In 2005, Katrina helped us realize that we can't afford to let global warming continue unabated. Yet Congress is still dragging its feet. Scientists and the public know that climate change is happening, and the impacts are only going to get worse.

What will happen when two catastrophes in one region meet, with this year's predicted horrible hurricane season soon hitting oily waters?

How many more disasters will we allow before we make the switch from dirty, polluting fuels to safe, clean energy sources that won't run out?

Robert Redford has it right. Our dependence on oil is bad for our health and it's bad for our country. We need the Senate to act before it's too late.

Even once the hole is plugged, the grease will never completely be cleaned up -- we're still finding oil from the Exxon Valdez spill! We can't lose sight of a better future and what it takes to get there. With President Obama's support, the Senate must pass tough climate and clean energy legislation THIS YEAR that makes the polluters pay, really moves us beyond petroleum and paves the way for the clean energy economy.

We are all heartsick watching the tragedy in the Gulf unfold. Our children deserve a healthier, safer future -- one that's not slicked with oil.

It's time for the Senate to give us something to be hopeful about.

Tell your senators to pass climate and clean energy legislation, and learn more about the Gulf oil disaster at www.nrdc.org/cleanenergynow.