The election is a year away and the Republicans are working hard to set the stage and prime the public for their campaign themes. Here are my predictions for the 2008 election environment the Republicans will try to set up.

And, above all, even if nothing changes, never forget that on Oct. 26, just before the 1972 election, all the headlines read "Peace is at hand!" 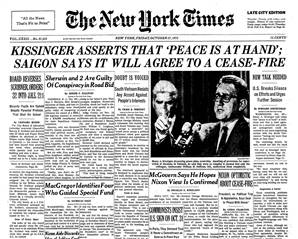 2) Immigration: Republicans assuredly have polling and testing that show this as a strong issue. This week's elections saw them testing messages to find out what works. Don't think this was beaten back, it was only field-tested. They're going to use this to divide us and drive wedges between us and split groups apart -- it's what they do.

3) Accusations that we have a Do-Nothing Ineffective Congress -- Republicans are filibustering everything, and Bush is vetoing the rest. Every single bill. The media is already running with a "Dems won't compromise' and "Dems can't get anything done" narrative and Congress is at a record low approval. You bet we'll be hearing this - they are hard at work developing it. Unless the Democrats start making a lot of noise about this and sustain it -and get the media to report the facts - the Republicans will get away with it.

Meanwhile Bush is going to veto EVERY spending bill, no matter what, and say it spends too much of the people's money. Meanwhile the right's machine will be drumbeating on this and on how Dems will make taxes go up.

5) Dems will face a hostile media that favors Republicans. It will be nothing like previous elections. The large media corporations aren't even pretending anymore that their news organizations are about profits. It is entirely about persuading the public to support candidates who get elected and then hand them more money than any little news organization could ever make for them.

And finally, 6) I expect there will be hugely-publicized indictments of Democrats (innocent) for corruption by the Republican Justice Department. Realize that the Justice Department probe is largely over now, and the prosecutors who "played ball" are still there, the ones who wouldn't are gone, and no one faced any consequences. The Republicans have successfully stymied the corruption investigations we had been reading about before the last election -- and they are going to make sure the public is reading corruption headlines about Democrats, not Republicans for the next one. Also, see New polls expose a corruption time bomb for Democrats,

According to CBS News exit polls 74% of all voters identified corruption as either extremely important or very important as they went to the polls. ... In one year we have lost a +13 point advantage on the issue. 13 POINTS!

Karl Rove outlines here that many of these points will be the centerpieces of the Republican campaign strategy:

Failing to pass a budget, proposing a huge spike in federal spending and offering the biggest tax increase in history are not the only hallmarks of this Democratic Congress.

. . . Beholden to MoveOn.org and other left-wing groups, Democratic leaders have ignored the progress made in Iraq by the surge, diminished the efforts of our military, and wasted precious time with failed attempts to force an immediate withdrawal from Iraq.

. . . Democrats promised "civility and bipartisanship." Instead, they stiff-armed their Republican colleagues, refused to include them in budget negotiations between the two houses, and have launched more than 400 investigations and made more than 675 requests for documents, interviews or testimony.

. . . The list of Congress's failures grows each month. No energy bill. No action on health care. No action on the mortgage crisis. No immigration reform. No progress on renewing No Child Left Behind. Precious little action on judges and not enough on reducing trade barriers. Congress has not done its work. And these failures will have consequences.

So this is what I see coming, and the Republicans are laying the messaging groundwork today. Do you see Democrats understanding any of this, or doing anything to lay down a messaging foundation to counter it and prime voters for their own campaign?

I say "Democrats" here, even though that's not really a party's job. On the right there is a coordinated message machine, or echo chamber, consisting of dozens of well-funded advocacy and communications organizations like Heritage Foundation. These organizations pump out a core, coordinated ideological message, creating demand for conservative policies and candidates.

Progressives lack a coordinated, outside-the-party infrastructure to take care of this function. Organizations with a mission of reaching out to the general public to promote the benefits of progressive values, and create demand for progressive policies and candidates just aren't getting funding because the big political money on the left seems entirely focused on short-term election results. There is no view that we are in a long-term war, so we're always stuck fighting the next battle from scratch, during the election cycle. That is an expensive, inefficient and shortsighted way to fight a war.