"What is the best gift that you've ever gotten for Hanukkah?" someone recently asked me. Before realizing I even had an answer, I blurted out, "The pink Barbie limo that my grandma picked out for me when I was 4 years old."

That limo was amazing! All of my Barbies could fit inside, and there was even a jacuzzi in the back seat! My grandmother died a year later, but I continued to use that limo during all of the crazy adventures and escapades my Barbies went on.

I only have a few memories left of my grandmother, but over the years I've clung to those memories and the dream of who I imagine she would have been to me. I imagine myself driving to her house, curling up into her arms and sitting for hours hearing about her stories of growing up in love and learning loss and change. Instead, I have these black and white photos that fill a shoebox with the words, "Evan-Picone - Rain Boots" written on the top.

I grab her box when I need it the most. I have the pictures memorized, yet they always feel new to me as I hold onto them, searching for answers about who she was or wondering what she would say to me now. There are hundreds of pictures of her with friends, sisters and men -- she's always dressed in crop-tops with high-rise flowy skirts, or a swing coat with diagonal zippers and over-sized buttons. She looks so happy, and she looks like me.

I look at the men who surrounded her and the way they gazed at her and I can just tell they loved her. It's strange to think that these men knew her better than I do.

But still, somehow, through this box of pictures I feel like I know her -- I feel like a granddaughter.

She was a woman who went against the grain. Instead of getting married in her 20's during the 1950's, like 95 percent of the other American women did, she waited until she was much older. I like to think that she waited for true love -- I wish I could ask her this now. She married my grandfather, who was a Holocaust survivor, which was less common, since most Holocaust survivors married other survivors.

Now that I know what it means to be in love with someone, I think about her a lot. Wasn't she scared? Wasn't it hard? Did they feel a distance because she could never truly know what he went through during the war, or did it somehow bring them closer together? Did they ever speak about it? He rarely spoke about it with anyone, but did he speak about it with her?

After my grandmother died, my grandfather asked my mom, "Who will wake me up from my nightmares now every night?" How did she do it? What did she used to say to him?

The power of womanhood and love and finding yourself. I'm just now uncovering the answers of what these things mean. Somehow, these photographs with perfectly jagged edges let me know that one day I will have a granddaughter who will ask me these same things too, and I will hold her, the way that my grandmother holds me. 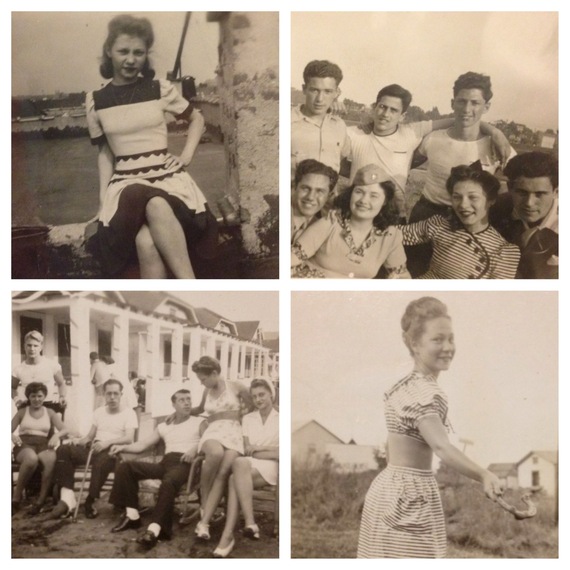 This blog was originally published in The Jerusalem Post.