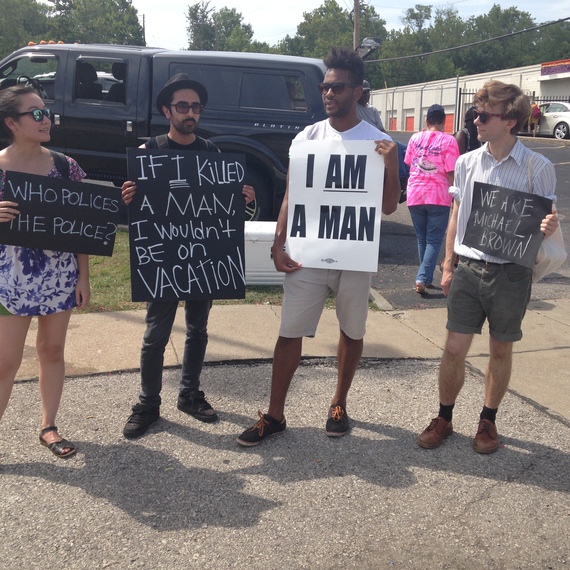 Much of my childhood was spent receiving words of caution from my maternal grandmother (we called her "Grandmama"). If I were about to ascend or descend an escalator, she would take me by the arm and say, "Now make sure your shoes are tied so the shoe string won't get caught in the escalator steps." Or, when, in a moment of eagerness, I would use my teeth to open the plastic wrapping of a Happy Meal prize, Grandmama would say, "Don't use your teeth on that plastic. You could choke to death." Or, whenever my younger brother and I would walk near a curbside storm drain, she would chime, "Don't walk too close to the storm drain. If you fall in, how am I supposed to get you out of there?" Whether her caution was well-founded or not, my brother and I were never eaten by an escalator, swallowed by a curbside storm drain, or suffocated by a piece of McDonald's plastic.

I decided to go to Ferguson on a whim. On August 21, 2014, I tweeted, "How can I get to #Ferguson? I think it's time to go." A Twitter follower of mine responded, "Leaving from DC, right?" with a link to an Eventbrite announcement about a group of activists heading to Ferguson the next day. Even from her freshly hewed grave, I could hear Grandmama saying, "You know I won't be able to sleep with you in harm's way." Deaf to her words of caution, and without my parents' knowledge, I paid the small fee to witness the pages of history unfold on all too familiar soil. All too familiar because the United States has a long history of killing and brutalizing young black people.

On August 22, 2014, 42 people loaded a bus at Washington, DC's Union Station to embark on a 14-hour journey to Ferguson, Missouri. Upon arriving in Ferguson, we were met by Antonio French, an alderman for the City of St. Louis' 21st Ward. "I'm in awe of how what's been happening on [West Florissant Avenue] is connecting with so many people," Alderman French said. "My tweets/Vines weren't just informative for outsiders, but they served to help me process this whole thing." After his introductory remarks, the alderman responded to questions from our group about a vision for longterm justice and healing in Ferguson, Missouri. "We're going to begin by recalling the mayor in October," Mr. French said.

And with those words, 42 of us plunged ourselves into the chaos of that community's collective grief and outrage over the death of one of their own, Michael Brown. Before I could even walk out onto the storied West Florissant Avenue, I stopped to have a conversation with a Ferguson resident who assured me that she would be protesting until Darren Wilson is arrested. "We have nothing but time. We are tired, but justice must be done." And tired we are. There is not a week that passes in which we don't hear about some story, somewhere in which a young black life is taken by a white law enforcement officer or vigilante. We are tired of the open season on our daughters and sons while citizens of our country advocate for "open carry" laws. This open season on black life ends with Michael Brown.

And with that resolve, our group went out into Ferguson, Missouri registering people to vote, listening to firsthand accounts of the previous fortnight of unrest, and paying respects to a life lost far too soon. While walking down West Florissant, I happened across a group of citizens handing out pizza and wearing shirts that read, "#Pump6". When I inquired about the name, a man approached me and said on the second day of unrest, a group of citizens gathered at pump number six at the local Quick Trip gas station to feed hungry protesters. When the Quick Trip fell into disrepair, people took to social media asking where Pump 6 was. Within a few hours, Pump 6 had reorganized along West Florissant, feeding Ferguson with in kind contributions from across the country. To my knowledge, Pump 6 is still out on that avenue, offering people the sustenance they need keep the struggle for justice alive.

Upon returning to our bus to embark on the journey back to D.C., I was surprised to see two armored vehicles with the words "State Patrol" emblazoned on the side. A gaggle of twelve or so Missouri State Highway Patrol officers stood around the armored vehicles, without name tags. In a moment of curiosity, I approached one of the officers and asked him why only one of his thirteen fellow officers was wearing name identification. "Well, earlier this week, one of our officers' identity was stolen," the unidentified officer told me. "And we just can't run the risk of that happening again." Apparently, my face expressed my level of discontent with the officer's less than convincing answer. "You don't believe me, do you?" he asked. "Absolutely not," I retorted. When asked how this conflict would ever come to an end, the officer, said, "We're dealing with people who come from homes with no authority, so who knows?"

As I stood there, taking in the officer's unwarranted and unfounded commentary on black family life, I thought of Grandmama and how, if my cards weren't played right, I'd be seeing her in heaven pretty soon. But this time, I don't think she would have issued a word of caution for my conversation with the unidentified Missouri State Highway Patrol officer. I think she would start humming a Freedom song she taught me when I was seven years old. "We've met jail and violence too, but God's love has seen us through. Keep your eyes on the prize. Hold on. Hold on." And hold on, I will.