When did you get her?
Who is the real mom?
Are you the aunt?
Does she have a dad?

We didn't get her. She doesn't have a dad. She has two moms: Mommy and Mama. We are both her real moms. We planned for her. We spent a year trying to conceive her. A year dreaming of her, hoping for her. Through first words, first steps, tantrums, bad dreams, parent teacher conferences, and the agonizing public school lottery, we are her parents.

When we chose to start this little family of ours, we had been legally married here in Massachusetts for five years, but knew that the fight for equality was just beginning. While pregnant, we worried about the second parent adoption and what would happen if we traveled outside of our state and we needed medical care. We worried about what our daughter's teachers and doctors and peers would think of us. We expected to have to defend our little family. We were right. At our daughter's first pediatrician appointment, her doctor asked, "Who is the real mom?" At a grocery store, the cashier wouldn't let it go, "Are you the aunt?"

Lesbian motherhood is a whole new kind of coming out.
The curiosity, the questions, they haven't stopped. Sometimes we find ourselves working the answers into conversation before the questions are asked. I will mention breastfeeding or "when I was pregnant..." in conversation to avoid questions of "Which of you is the real mom?" We both are. Over time, we've realized that most of the questions come from a place of curiosity, not from an attempt to offend us. They just don't know how to say it. Perhaps because saying, "Was one of you pregnant, or did you use another method to create your family?" feels too personal. But asking, "When did you get her?" isn't working either.

As mothers, we are our own worst critics. Lesbian mothers are not exempt from this.
Motherhood is hard. The pressure, the stress, the standards we put on ourselves, and how the judgments of others affect us. We, as mothers, are our worst critics and often struggle in silence. As lesbian parents, this self imposed pressure is even greater. We worry that if we don't do this right, those around us will not only judge our parenting skills, but will judge same-sex parenting altogether. In our neighborhood, we are one of many two mom families, but away from home, that's not always the case. We often feel like we have something to prove. We need to do this right, so the world can see that same-sex parents are good enough.

The world is becoming a better place for same-sex families, one step at a time.
Even with the questions and the additional pressure, we realize our daughter was born in an amazing time. Statistically, more people support marriage equality than don't. Studies show that children of same-sex parents are thriving. The kids are alright. They really are. The voices of hate are still there, but the voices of love and support are getting louder and stronger. 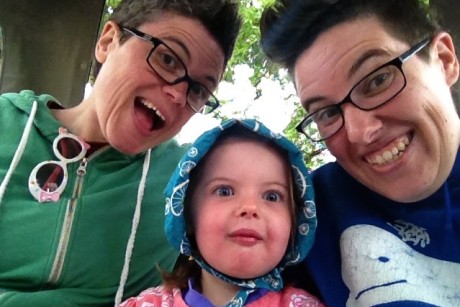